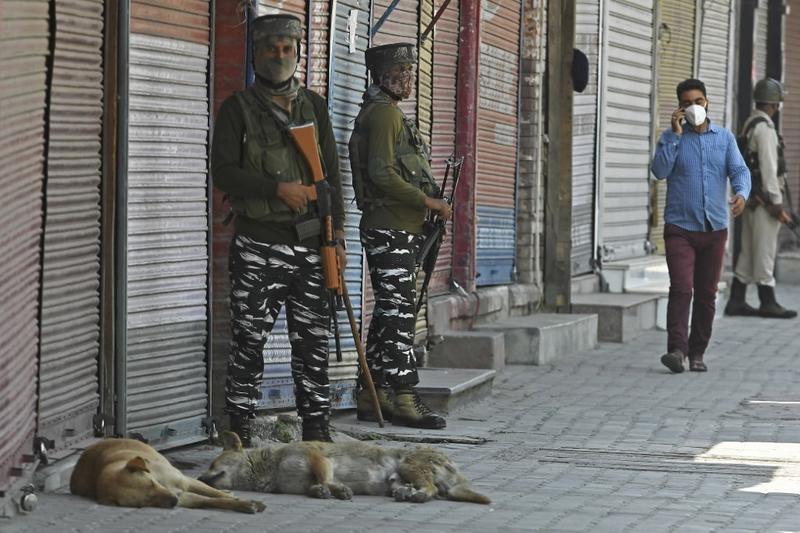 Indian paramilitary troopers stand guard in front of closed shops in a street during a lockdown imposed by authorities after a sudden surge of COVID-19 cases, in Srinagar on July 14, 2020. (TAUSEEF MUSTAFA / AFP)

ISLAMABAD / SRINAGAR - Pakistan on Monday summoned a senior Indian diplomat to lodge a protest over the ceasefire violations by the Indian forces along the Line of Control (LoC) in Kashmir, the Pakistani foreign ministry said.

Due to the firing by the Indian forces in Rakhchikri and Khuiratta sectors of the LoC on Sunday, six civilians were seriously injured, the foreign ministry said in a statement.

India has committed 1,659 ceasefire violations to date this year, resulting in 14 deaths and serious injuries to 129 civilians, it added.

Pakistan and India had declared a ceasefire along the LoC but both sides have routinely exchanged fire and accused each other of ceasefire violations.

On Monday, Indian and Pakistani troops have exchanged fire and targeted each other's positions on the LoC, officials said Tuesday.

The two sides traded fire late on Monday in the Tangdhar sector of frontier Kupwara district, about 155 km northwest of Srinagar city, the summer capital of Indian-controlled Kashmir.

"Last evening, Pakistan initiated an unprovoked cease-fire violation along the LoC in Tangdhar sector by firing mortars and other weapons," an Indian army spokesman said. "Our side gave a befitting response to them."

According to officials, the exchange went on for a while. So far, there were no reports of any damage or casualties on the Indian side, the spokesman said.

There has been a surge in ceasefire violations on the LoC over the past month.