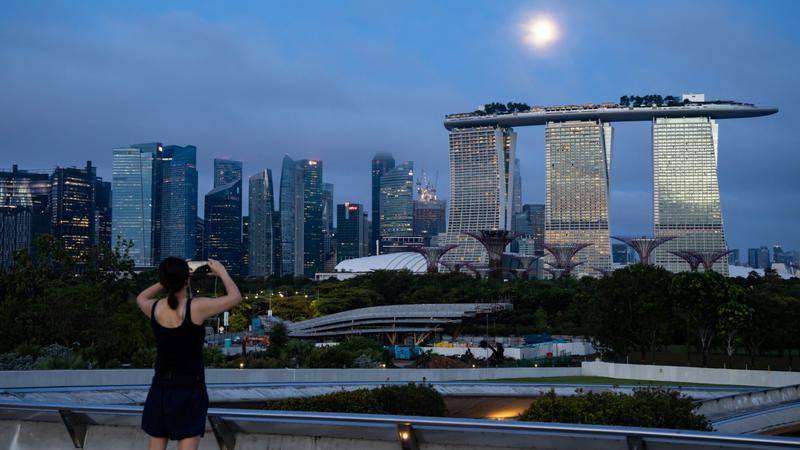 A person with a smartphone takes a photograph of the Marina Bay Sands hotel and casino, right, and other buildings at dawn in the central business district in Singapore, on Feb 10, 2020. (PHOTO / BLOOMBERG)

Gross domestic product declined an annualized 41.2 percent from the previous three months, the Ministry of Trade and Industry said in a statement Tuesday, the biggest quarterly contraction on record and worse than the Bloomberg survey median of a 35.9 percent drop.

The deep slump shows the blow Singapore’s economy is taking from all sides amid the pandemic. A plunge in global trade has hit the export-reliant manufacturing industry, while retailers have seen a record decline in sales after partial lockdown measures were imposed for several weeks last quarter

Compared with a year earlier, GDP fell 12.6 percent in the second quarter, versus a survey median of -10.5 percent.

The deep slump shows the blow Singapore’s economy is taking from all sides amid the pandemic. A plunge in global trade has hit the export-reliant manufacturing industry, while retailers have seen a record decline in sales after partial lockdown measures were imposed for several weeks last quarter.

The government, which has projected a full-year economic contraction of 4 percent to 7 percent, didn’t provide a new forecast Tuesday.

The dismal outlook is pressuring the ruling People’s Action Party, which had its weakest performance ever in last week’s election. The government has already pledged about S$93 billion (US$67 billion) in stimulus to shore up troubled businesses and households and to prevent a surge in retrenchments.

“The road to recovery in the months ahead will be challenging,” Trade and Industry Minister Chan Chun Sing said in a Facebook post. “We expect the recovery to be a slow and uneven journey, as external demand continues to be weak and countries battle the second and third waves of outbreaks by reinstating localized lockdowns or stricter safe-distancing measures.”

Based on annualized quarter-on-quarter data, manufacturing plunged 23.1 percent, compared with growth of 45.5 percent in the previous three months, while construction plummeted 95.6 percent.

Services shrank 37.7 percent with airlines, hotels and restaurants restricted during the partial lockdown, when “circuit breaker” measures were imposed from April 7 to June 1.

Vishnu Varathan, head of economics and strategy at Mizuho Bank Ltd in Singapore, said last quarter’s drop was probably the bottom of the cycle “unless Singapore is forced to regress to the harsher iteration of circuit-breaker measures.” Additional stimulus isn’t ruled out, though “the four fiscal packages need time to permeate and cascade,” he said.

Singapore’s dollar slipped 0.1 percent to S$1.3920 against the US dollar as of 9:05 am local time. The Straits Times Index dropped as much as 0.6 percent on Tuesday, set for a third day of declines, its biggest losing streak since June 22.

The GDP release provides a window on how deep a recession other Asian economies are likely to face. Thailand’s official forecast of an 8.1 percent contraction this year is the worst in the region, while others like India and Indonesia are facing a surge in virus cases that’s exacerbating economic woes.

Factory purchasing managers indexes show that manufacturing across Asia started to pick up at the end of the second quarter, as early phases of re-opening in many countries begin to revive demand.

Ho Meng Kit, head of the Singapore Business Federation, said the following two quarters will likely be better than the second quarter.

“Even as the economy has opened up since early June, for example small businesses in domestic retail, they are not at the previous levels because there’s still no tourism in Singapore,” he said in an interview on Bloomberg Television. “So, there will be an impact on demand and these sectors will continue to be weak.”

Singapore’s advance GDP estimates are computed largely from data in the first two months of the quarter, and often are revised once the full quarter’s data are available.

“The question is if the second-half recovery will materialize, which will also depend on private consumption coming back,” said Selena Ling, head of treasury research and strategy at Oversea-Chinese Banking Corp. She expects the economy will contract 5.5 percent for the full year.