Singapore's Prime Minister and secretary-general of the ruling People's Action Party Lee Hsien Loong leaveS the party's office after delivering the speech live on facebook to citizens during the counting of votes of the general election in Singapore, in the early hours of July 11, 2020. (ROSLAN RAHMAN / AFP)

SINGAPORE - Singapore’s ruling People’s Action Party (PAP) extended its unbroken rule in Friday’s election, but its vote share slipped near a record low as opposition parties made historic inroads in a ballot held under the cloud of the COVID-19 pandemic.

Having held power since independence in 1965, the PAP had been widely expected to win and carry Prime Minister Lee Hsien Loong to what is likely his last victory before retirement as national leader.

The PAP secured 83 out of 93 seats in parliament. But the main opposition Workers’ Party won the other 10, the most ever held by opposition lawmakers, while the PAP’s popular vote fell to 61 percent, down from 70 percent in 2015

The PAP secured 83 out of 93 seats in parliament. But the main opposition Workers’ Party won the other 10, the most ever held by opposition lawmakers, while the PAP’s popular vote fell to 61 percent, down from 70 percent in 2015.

Even small shifts in the PAP’s popularity can lead to major policy changes, and PM Lee struck a downbeat tone in an early morning press conference on Saturday.

“We have a clear mandate but the percentage of the popular vote is not as high as I had hoped for,” Lee said.

“The results reflect the pain and uncertainty that Singaporeans feel in this crisis... This was not a feel-good election.”

In a city-state with tight rules around speech and assembly and a lopsided political power balance, opposition supporters took the result as a landmark show of strength.

“The results have surpassed the expectations even of some in the opposition,” said Loke Hoe Yeong, author of First Wave, a book on the history of the Singapore opposition.

“It also looks like voters are voicing their disapproval of the PAP calling a general election in the midst of the pandemic.” 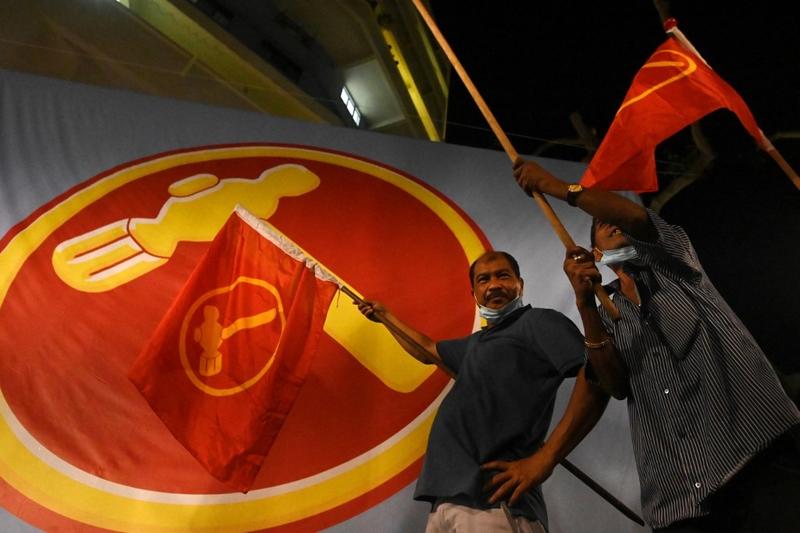 Supporters of the opposition Worker's Party wave party flags at as they gather at the public housing district during the counting of votes of the general election in Singapore, in the early hours of July 11, 2020. (ROSLAN RAHMAN / AFP)

JOBS FEARS TO THE FORE

The PAP’s two-thirds majority affords them a free hand to pass legislation and amend the constitution, but its leaders will also be under pressure to address the slip in support.

When concerns around immigration and jobs flared in 2011, the PAP polled a record low 60 percent of the vote and tightened international hiring rules to address voters’ sensitivities.

Those concerns have come to the fore again as the country emerges from lockdown to face its deepest recession.

Lee, the son of Singapore’s founding leader, Lee Kuan Yew, called the election to seek a fresh mandate to guide the country through a health crisis that has crushed the small but open economy.

Singapore is not the first country to hold elections during the pandemic - South Korea and Serbia have also held polls - but opposition parties had pushed back on the plan saying it endangered voters and hindered their campaigning.

“They think that they’ve done well dealing with the pandemic,” said Muhammad, a 33-year-old construction safety manager amongst ebullient Workers’ Party supporters. “They haven’t,” he said.

Singapore has one of the lowest COVID-19 fatality rates in the world and initially earned widespread praise for its efforts. But subsequent outbreaks in cramped migrant worker dormitories stained that early success, and persuaded the government to keep schools and businesses closed for longer.

Lee, 68, who has held the premiership since 2004, retained his seat easily. He had previously flagged his intention to step aside in coming years, but said on Saturday he would stay on to see through the COVID-19 crisis.

Meanwhile, his deputy and earmarked successor, Heng Swee Keat, won his seat with a slim 53 percent of the vote in what analysts said was a key test of his public support.