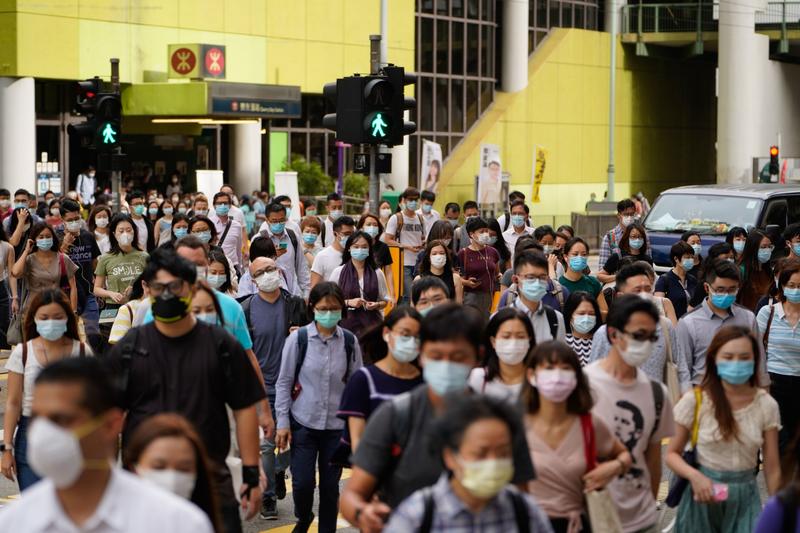 Pedestrians wearing masks to protect themselves against the coronavirus walk across a street in Hong Kong on July 10, 2020. (PHOTO/BLOOMBERG)

HONG KONG - Health authorities confirmed 28 new coronavirus cases in Hong Kong on Saturday, 16 of which locally transmitted, bringing the infection tally in the financial hub to 1,431.

Another 33 cases are pending final confirmation, health officials said during a press briefing held in the afternoon.

Among them is an acting senior immigration assistant stationed at the Shenzhen Bay Control Point, according to the Immigration Department.

The officer, 27, is mainly responsible for conducting immigration clearance for passengers at the control point. He last performed his duties on Wednesday and was on leave for the next two days, the department said in a press release issued on Saturday.

He has no recent travel history and has been wearing a mask when performing duties. His body temperature was normal, according to the release.

The Centre for Health Protection is trying to find out the cause of his infection and his workplace has been fully sterilized.

On Thursday, the city recorded 34 locally transmitted infections, the most in a single day since the pandemic began.

In response to the surge, the government reintroduced social restrictions that cap restaurant capacity at 60 percent and limit eight people to a table. The rules, effective Saturday, will be in place for two weeks, unless extended.

"The flow of people must be very carefully orchestrated in order to lower the risks as far as possible," said Secretary for Food and Health Sophia Chan Siu-chee after attending a radio program.

She said the epidemic is worrying and the city's government is planning to test targeted groups, such as elderly home staff, taxi drivers and workers of catering businesses.