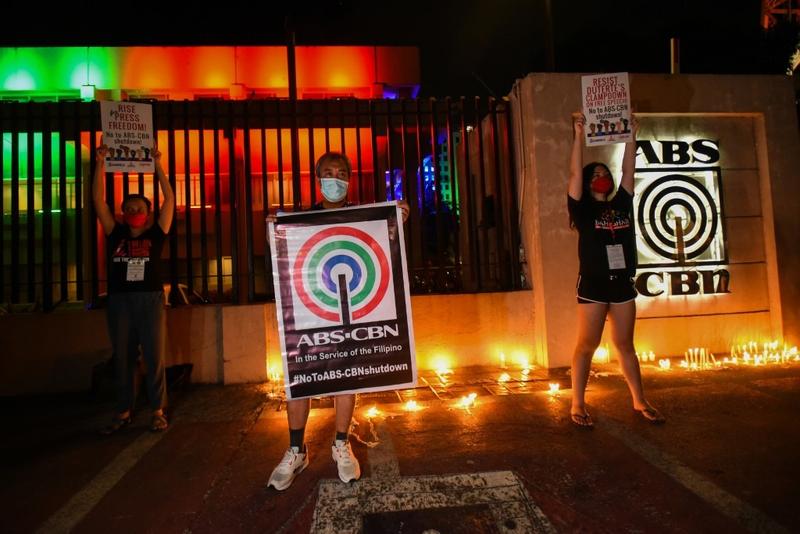 In this file photo, ABS-CBN workers and members of the National Union of Journalists of the Philippines rally to show support for the broadcaster in Manila on May 5, 2020. (MARIA TAN / AFP)

MANILA - Philippine lawmakers rejected the country’s largest media company ABS-CBN Corp’s bid for a 25-year franchise, casting uncertainty over how the broadcaster will operate after two months of state-ordered shutdown.

A House of Representatives committee adopted a sub-group’s recommendation to deny the franchise application of ABS-CBN, whose main television and radio stations have been shut since May after its franchise lapsed

A House of Representatives committee adopted a sub-group’s recommendation to deny the franchise application of ABS-CBN, whose main television and radio stations have been shut since May after its franchise lapsed. An appeal can be filed, according to House rules, but it will be processed by the same panel. Seventy out of 84 lawmakers voted to deny the franchise bid.

“We remain committed to public service, and we hope to find other ways to achieve our mission,” ABS-CBN President Carlo Katigbak said in an emailed statement after the vote.

ABS-CBN shares have slumped 16 percent since May 5 when its television and radio stations went off air, while GMA Network Inc rallied 26 percent to a two-year high on expectation its business will gain from its rival’s closure.

ABS-CBN fell 2.6 percent at the 1 pm close of trading in Manila on Friday and the rejection of the franchise could cause the stock to collapse, said Rachelle Cruz, an analyst at AP Securities Inc.

ABS-CBN’s shutdown has affected 11,000 employees, and has cost the network as much as 35 million pesos in daily advertising revenues. The broadcaster’s “highly politicized” closure may deter foreign investments in the Philippine telecommunications sector, Fitch Solutions Inc said in July 7 report.

Often the target of President Rodrigo Duterte’s attacks for alleged bias, ABS-CBN also has a pending petition before the Supreme Court questioning its closure. Duterte remains neutral on the issue and has left it to Congress to decide on the franchise, his spokesman Harry Roque said earlier this week.

“This is the final nail in the coffin,” said Manny Cruz, an analyst at Papa Securities Corp “ABS-CBN should just wait for Duterte’s term to end before seeking a franchise for another application under the current dispensation will likely get rejected again.”

Duterte has also attacked Philippine Daily Inquirer and Rappler Holdings Corp, for their reporting on his drug war that has killed thousands. The Southeast Asian nation ranked 136th out of 180 nations this year in Reporters Without Borders’ World Press Freedom Index, continuing a decline for the past three years under Duterte.

Human Rights Watch said Congress’ refusal to renew the permit of ABS-CBN “is a grievous assault on press freedom in the country” unseen since 1972 when the late dictator Ferdinand Marcos shut down ABS-CBN and other media outlets.

House Speaker Alan Peter Cayetano on Thursday said the franchise decision is not about press freedom, but a check on businesses supposedly using public airways for private gain.