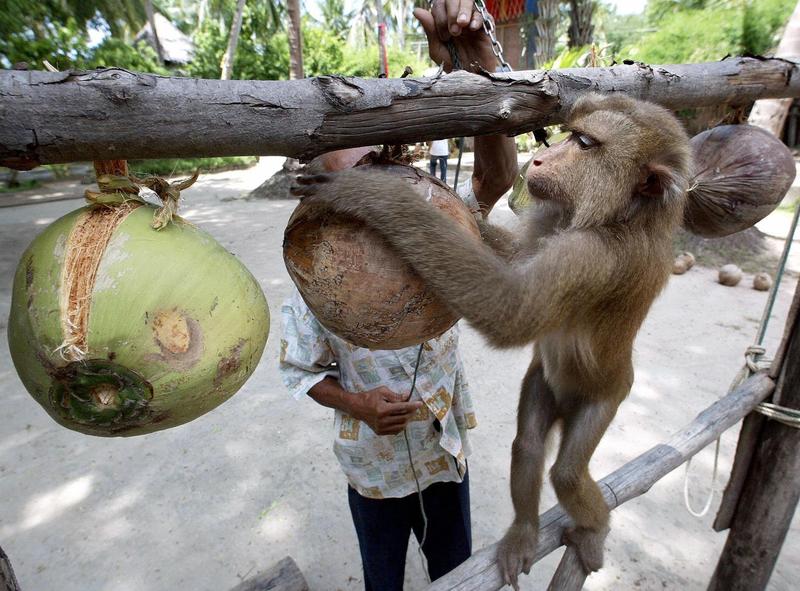 In this undated photo, a Thai monkey trainer works with a monkey showing it how to collect coconuts at the Samui Monkey Center on Samui island. (PORNCHAI KITTIWONGSAKUL / AFP / GETTY IMAGES)

Thailand, the world’s top producer of coconut milk, said it will enable retailers and consumers to trace coconuts back to their source to show whether monkeys have been used for harvesting.

The US$400 million industry, which relies on monkeys at some plantations, is facing possible boycotts in the US, Europe and Australia

The US$400 million industry, which relies on monkeys at some plantations, is facing possible boycotts in the US, Europe and Australia after the People of the Ethical Treatment of Animals, known as PETA, alleged that monkeys are being abused and “treated like coconut picking machines” for Thai growers and producers.

Officials from the country’s commerce ministry, animal welfare agency, and representatives from the industry met in Bangkok on Wednesday, and have agreed to create measures that ensure the traceability of Thai coconut products, according to a statement. Packages will be marked with a code that can be used to track the products back to their source, which will show whether they came from monkey-free plantations.

PETA alleges that an undercover investigation at eight farms and several monkey training schools revealed “shocking abuse” where “monkeys are chained, confined to cramped cages, and forced to climb trees and pick coconuts.” The organization called on the Thai government to ban the “enslavement of monkeys.”

“We have to understand that climbing tall trees for humans is a very dangerous job that could end in injury or death,” said Somjai Saekow of the First Monkey School, a training center for coconut-collecting monkeys in southern Thailand. “It would be great if we can find an alternative way to collect coconuts. Many of us will be happy to change.”

Using monkeys to collect coconuts is an old tradition that may need to change with time even if very few growers still practice it, according to Naris Khamnurak, a lawmaker from southern Thailand, the biggest coconut growing area.

Thailand’s two major coconut producers that PETA alleges are using monkey labor denied the claims. Theppadungporn Coconut Co., the maker of Chaokoh coconut milk, said that the company buys coconuts from plantations that use humans to harvest, adding that retailers abroad have been contacting the company on this issue. Thai Agri Foods Pcl, the maker of Aroy-D coconut milk, said its products aren’t sourced from plantations that use monkeys.

Thailand is among the world’s biggest producers of coconuts, producing about 1.3 million tons of each year. It exports a range of products, from fresh and desiccated coconuts to coconut milk and oil. The PETA campaign has affected sales in the UK as well as other European countries, Thai Commerce Minister Jurin Laksanawisit said.

On the Thai measures to improve traceability, PETA responded on Thursday by saying that while the new system is welcome, it requires companies to be forthright.