A man sets out deck chairs as the sun rises on the beach in Hua Hin on May 28, 2020, as Thailand continued to ease restrictions imposed to stop the spread of COVID-19 coronavirus. (JACK TAYLOR / AFP)

The Southeast Asian country wants to build on its reputation and remake its popular image as a destination for big tour groups.

“After COVID eases, we plan to refresh the country’s image to a trusted destination where tourists will have peace of mind,” Tanes Petsuwan, the Tourism Authority of Thailand’s (TAT) deputy governor for marketing and communications, told Reuters.

The campaign, to be launched later in the year, will be aimed at young affluent travelers from places that are considered low-risk such as China, South Korea and Taiwan, Tanes said. It will highlight scenic beaches and parks, part of a “tourism bridge” that could emerge in Asia including Hong Kong and Japan.

The government has rolled out a health certification system for hotels and restaurants so that travelers can be reassured. “The certificate is a tool to build trust and showcase Thailand as your amazing trusted destination,” Tanes said.

Southeast Asia’s second-largest economy has so far reported just over 3,100 cases and 58 deaths – far less than other major regional economies, except for Vietnam. Local transmission has waned, with the last recorded case on May 25.

The tourism industry, which accounts for 12 percent of the economy, collapsed after the outbreak escalated. Thailand welcomed 39.8 million foreign tourists last year but projects as few as 14 million for 2020.

Thailand has banned international flights until at least June 30, and foreign tourists aren’t expected until later in the year. In the meantime, the government is drawing up a stimulus package to promote domestic tourism from July to October.

But when international travel resumes, Thailand will promote the “trust” concept, as hotels emphasize measures they are taking for safety and offer special packages.

Central Plaza Hotel Pcl, which manages 46 hotels and resorts across Thailand, will seal rooms once they are cleaned and disinfected so guests will be confident, deputy CEO Markland Blaiklock told Reuters.

“We may limit occupancy at 50 percent on some properties so guests experience social distancing that they are comfortable with,” he said. But it’s unclear if travelers will be at ease before a coronavirus vaccine is available, which experts say is at least a year away.

For now, hotels will have to go the extra mile to tempt travellers. Potjanee Darakamas of Oxford Acuity, which manages and operates hotels, cited private airport transfers, in-room spa services and packages around specific themes such as health retreats and activities tailor-made for individual guests.

“Hygiene is a must, so offering bespoke services will give boutique hotels with unique selling points an advantage over corporate operators.”

Turkey could extend a three-month ban on layoffs that was imposed in April to offset shuttered businesses and unemployment in the face of the coronavirus pandemic, Hurriyet newspaper reported on Friday, citing unnamed officials.

Hurriyet said President Tayyip Erdogan could extend the ban for three more months. As part of a new draft law, the government is looking at ways to give incentives to companies that maintain employment or hire new people, it said.

In response to the outbreak, Turkey topped up the wages of employees whose work hours were cut and whose employers applied for the funding. That system could be replaced by alternative support systems, the paper said. 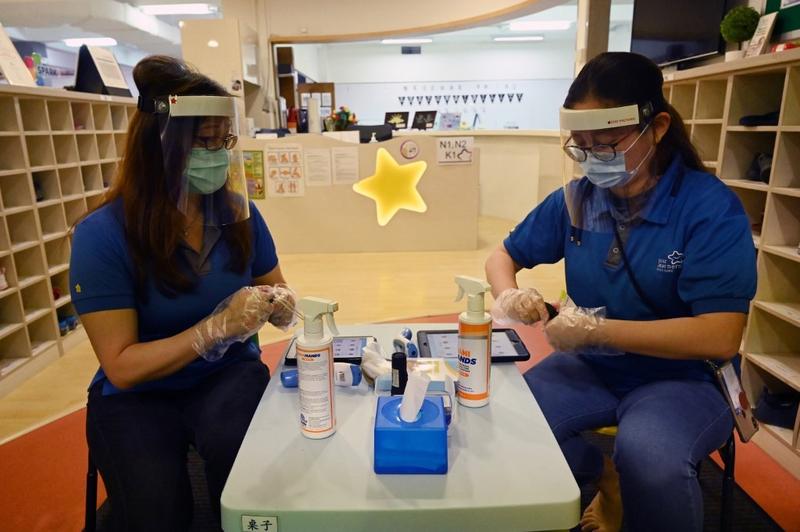 Teachers prepare for health checks on children before entering the classroom as schools reopened in Singapore on June 2, 2020 after the city state eased the partial lockdown imposed to prevent the spread of COVID-19. (ROSLAN RAHMAN / AFP)

Singapore plans to soon launch a wearable device for novel coronavirus contact tracing that, if successful, it will distribute to all of its 5.7 million residents, the government said on Friday.

The city-state has already developed the first-of-its-kind smartphone app to identify and alert people who have interacted with novel coronavirus carriers, but the bluetooth technology has been beset with glitches and the app is not widely used.

“We are developing and will soon roll out a portable wearable device that will ... not depend on possession of a smartphone,” foreign minister Vivian Balakrishnan told parliament on Friday.

“If this portable device works. We may then distribute it to everyone in Singapore ... This will be more inclusive, and it will ensure that all of us will be protected.”

The device being developed can be worn on a lanyard or kept in a handbag and will be battery-operated, Balakrishnan said last month in an interview with Sky News Australia.

Singapore is building up its vaccine manufacturing capacity in order to offer services to vaccine developers, Singapore Prime Minister Lee Hsien Loong said in published remarks delivered at a summit.

The effort is aimed at helping companies ramp up production faster and assure them high standards of safety and quality in the manufacturing process, Lee said. 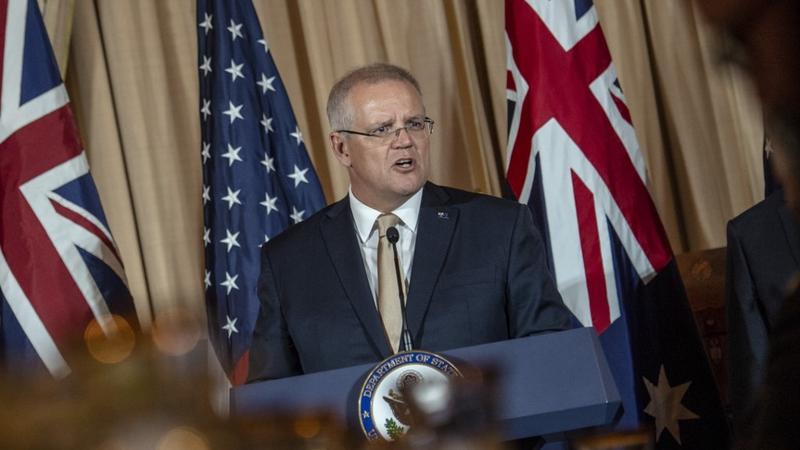 In this file photo, Australian Prime Minister Scott Morrisson gives a speech during a luncheon at the State Department in Washington, DC on September 20, 2019. (ERIC BARADAT / AFP)

Organizers expect thousands of people to attend rallies in Sydney, Melbourne and other cities. The protests have split opinion, with some state police and lawmakers approving the action despite the health risks

Organizers expect thousands of people to attend rallies in Sydney, Melbourne and other cities. The protests have split opinion, with some state police and lawmakers approving the action despite the health risks.

Morrison said people should find other ways to express anger following the death of black American George Floyd in US police custody.

“The health advice is very clear, it’s not a good idea to go,” Morrison told reporters in Canberra. “Let’s find a better way and another way to express these sentiments ... let’s exercise our liberties responsibly.”

The protests will also throw a spotlight on police treatment of Australian indigenous people, including the deaths of Aboriginal men in custody.

Japanese household spending fell by the most on record in April as people stayed home and shops and restaurants shut amid a nationwide declaration of emergency over the coronavirus.

Spending dropped 11.1 percent from a year earlier, the most in data going back to 2000, the internal affairs ministry reported Friday. Saudi Arabia registered in the last 24 hours 1,975 new coronavirus cases, bringing the total confirmed cases to 93,157 in the country, the health ministry tweeted on Thursday. 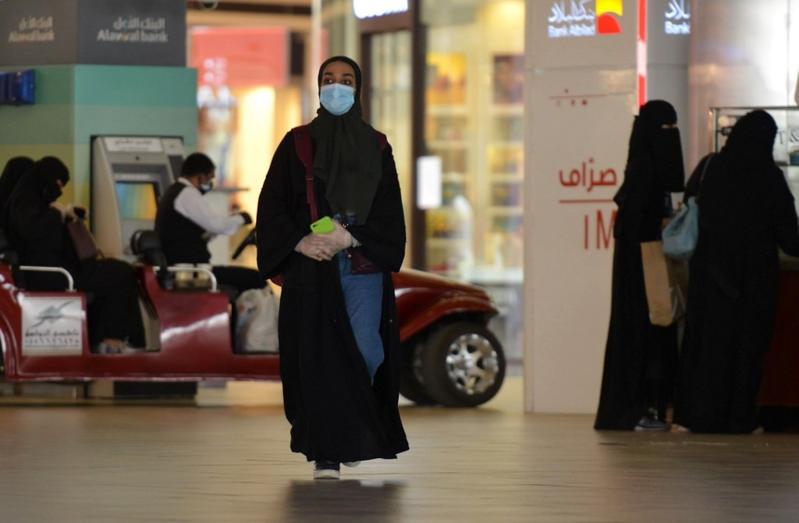 Women shopping at a mall in the Saudi capital Riyadh wear face masks on June 4, 2020, after the authorities eased some of the restrictive measures put in place to combat the spread of the novel coronavirus, but at the same time imposed tough penalties against those not wearing protective face masks in public places. (FAYEZ NURELDINE / AFP)

The death toll in the kingdom reached 611 after the reporting of 32 new fatalities, according to the ministry.

The recoveries rose to 68,965 with the registration of 806 new recovered cases.  Riyadh topped other cities in the number of new cases with 675 infections.

Saudi Arabia and China have supported each other in fighting the COVID-19 pandemic. In mid-February, the kingdom offered generous support to China to help fight the deadly virus.

As the virus raged in Saudi Arabia, a team of eight Chinese medical experts visited the kingdom on April 15 to assist its anti-coronavirus fight.

On April 26, the two sides signed a deal worth US$265 million for expanding Saudi Arabia's coronavirus testing capacity.

Jordan said on Thursday it would reopen hotels and cafes, allow sporting events without spectators and shorten a night curfew as of Saturday, further easing its coronavirus lockdown that has hit the aid-dependent economy.

But Prime Minister Omar al-Razzaz told reporters that while Jordan had now returned to near normality, it would now toughen enforcement of social distancing to ensure there was no risk of a resurgence of infections.

Jordan has withstood the COVID-19 pandemic better than most regional neighbours after taking early steps in mid-March to restrict the mobility of its 10 million people, sealing its borders, imposing a state of emergency and a night curfew.

Uzbekistan has further lifted lockdown restrictions, allowing restaurants, clothing markets and kindergartens to reopen starting from June 15 depending on the sanitary and epidemiological situation of COVID-19, the country's Special Republican Commission to Combat Coronavirus said Thursday.

Uzbekistan has divided the country into red, yellow and green zones depending on the level of quarantine severity. It also allowed resumption of domestic tourism, educational, recreational and sports centers in green zones starting from Friday.

Within the past 24 hours, 1,570 tests were conducted, and 915 were positive cases, the ministry said in a statement.

Up to 309 deaths have been recorded since the outbreak of the pandemic in the country in February, an increase of nine within the past 24 hours.

Out of total infected people, 1,763 have recovered, including 178 who showed improvement and were discharged from hospitals since early Thursday.

The Afghan health authorities have conducted 45,139 tests as of Friday morning across the country.

"A total of 715 tests for COVID-19 were conducted at four laboratories across the country on Thursday and five of them were positive," the NCCD's head Dulmaa Nyamkhuu told a daily press conference.

The governor of Indonesia’s capital announced on Thursday the easing of some coronavirus restrictions though he warned that the fight against the outbreak was far from over in Southeast Asia’s biggest city. 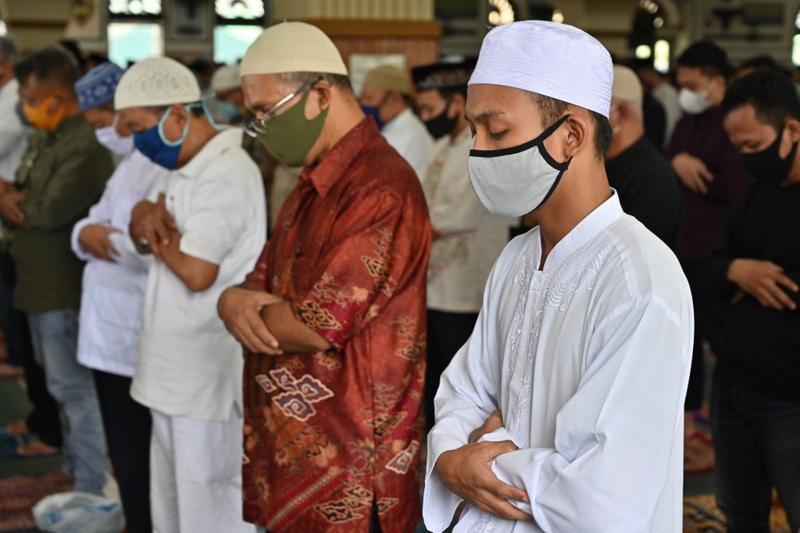 People offer congregational Friday prayers at the Al Azhar mosque in Jakarta on June 5, 2020 as mosques and other places of worship reopen amid ongoing social restrictions due to the COVID-19 pandemic. (ADEK BERRY / AFP)

Governor Anise Baswedan said from Friday some public transport could resume normal operations and houses of worship would reopen, though with restrictions. Restrictions on movement, in place since mid-April, would be extended.

“This is just a transition. Only when we’re healthy, safe, and productive will we reach the end of our fight,” Baswedan said in a video briefing.

Offices and malls would open in the city of more than 10 million people over the next two weeks, he said.

Baswedan cited a downward trend of coronavirus deaths in Jakarta to justify the easing, but said authorities would intervene if new clusters emerged.

Indonesia has been the hardest-hit country in East Asia outside China, with 28,818 coronavirus cases and 1,721 deaths. While there has not been a national lockdown, cities have been allowed to impose restrictions, although they have not always been strictly adhered to.

Jakarta has been the epicentre of the outbreak, with 7,690 cases and 523 deaths. In recent weeks, people have flocked to markets while long queues at the airport caused outrage on social media.