Bolsonaro plans to appease investors with ban on Amazon fires 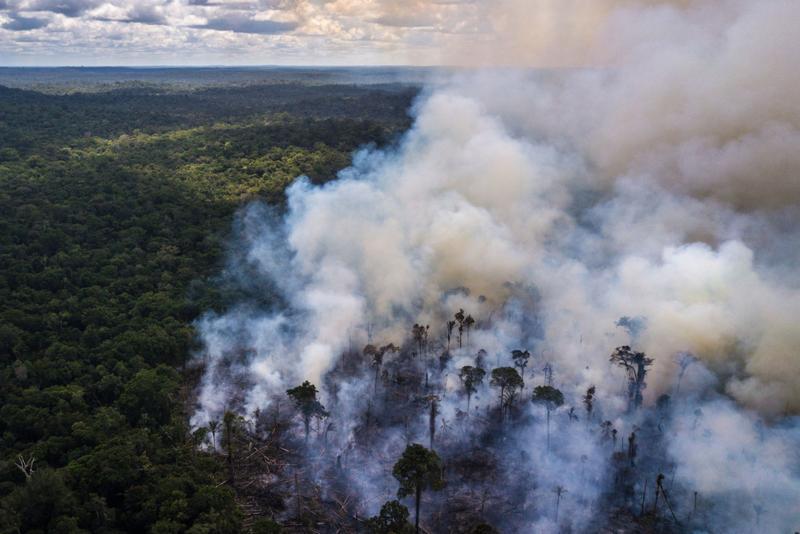 Smoke rises above the Amazon rainforest, outside an indigenous reservation, in this aerial photograph taken near Jundia, Roraima state. Brazil, on Monday, Jan. 28, 2019. (DADO GALDIERI / BLOOMBERG)

Brazil’s President Jair Bolsonaro plans to put a four-month ban on fires in the Amazon and Pantanal regions in response to criticism from international investors and Brazilian companies about a surge in deforestation.

In early June, Amazon Environmental Research Institute, known as Ipam, warned that an area 11 times the size of New York City could be incinerated in the dry season

The decree is being drafted by the Environment Ministry, with a start date yet to be decided. Last year, the government banned burning for 60 days before adding another 60 days. This year, it’s going straight to 120 days to prevent another jump in uncontrolled fires in the dry season.

The moratorium is one of the measures the administration will use to try to convince international investors that it’s taking a stand against deforestation. The stricter rules for the Amazon and Pantanal regions won’t apply in the Cerrado biome, a tropical savanna increasingly used for farming.

A video conference with businessmen and senior executives is scheduled for Thursday. In attendance will be Vice President Hamilton Mourao, who chairs the Council of the Amazon, Central Bank President Roberto Campos Neto as well as ministers for the environment, agriculture and foreign affairs, said two people with knowledge of the event.

The far-right government has faced mounting pressure from investors and entrepreneurs to do more to protect the environment amid surging deforestation in the Amazon.

On Tuesday, a group of companies including pulp maker Suzano SA, meatpacker Marfrig Global Foods SA and agribusiness giant Cargill Inc sent a letter to authorities stating that the negative perceptions are potentially damaging to both reputation and business prospects.

Amazon deforestation has surged in the past two years under the government of Bolsonaro, who defends opening up the world’s largest rainforest to agriculture and mining.

In early June, Amazon Environmental Research Institute, known as Ipam, warned that an area 11 times the size of New York City could be incinerated in the dry season. In June, the first month of the dry season, fires in this biome rose to a 13-year high, National Institute for Space Research data show. In Pantanal, the world’s largest wetland area, the number of fires this year through June is more than the double all of those recorded last year.

According to Ipam, smoke from fires may also inhibit Brazil’s efforts to contain COVID-19 infections.

In a closed-door meeting in May, Environment Minister Ricardo Salles urged Bolsonaro to take advantage of global leaders’ COVID-19 blinders to simplify regulations, according to a video of the gathering released by the Supreme Court.

READ MORE: The planet's future burns along with Amazon