US envoy plays down expectations for DPRK meet, but ready to talk 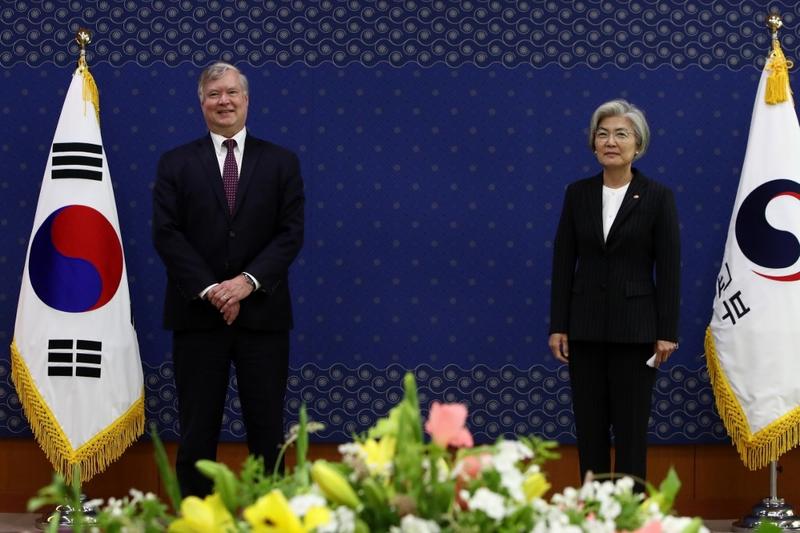 US Deputy Secretary of State Stephen Biegun stands with ROK Foreign Minister Kang Kyung-wha (R) during their meeting at the foreign ministry in Seoul on July 8, 2020. (CHUNG SUNG-JUN/ POOL / AFP)

SEOUL / PYONGYANG - US Deputy Secretary of State Stephen Biegun rejected on Wednesday reports that he was seeking to meet officials from the Democratic People's Republic of Korea (DPRK) during a visit to the Republic of Korea (ROK) this week, but reiterated that the United States was open to resuming talks.

The US point man for the DPRK, Biegun was in Seoul for meetings with ROK officials, overshadowed by the North's insistence that it had no intention of returning to denuclearisation negotiations as long as the United States clings to "hostile policies".

The talks ranged over issues from coronavirus response and cost-sharing for the US military deployment in the ROK, but the DPRK dominated the agenda, the South's officials said.

The United States strongly supports inter-Korean cooperation, and we believe this plays an important component in creating a more stable environment on the Korean Peninsula

"The United States strongly supports inter-Korean cooperation, and we believe this plays an important component in creating a more stable environment on the Korean Peninsula," Biegun told reporters in Seoul after talks with Lee, according to Yonhap news agency.

"We look forward to fully supporting the government of (South) Korea as it advances its goals with North Korea in inter-Korean cooperation," the US top nuclear envoy said.

The ROK is also referred to as South Korea and the DPRK as North Korea.

Biegun's visit had sparked speculation about a last-ditch effort to revive the DPRK talks ahead of the US presidential election in November, but he played down expectations for new meetings.

"Let me absolutely be clear, we did not request a visit," Biegun said at the briefing. "This visit this week is to meet with our close friends and allies, the South Koreans."

But Biegun said he was ready to resume talks at any time the DPRK designated.

"We look forward to continuing our work for a peaceful outcome of the Korean peninsula, I believe this is very much possible," he said, adding that US President Donald Trump had given his full support.

Biegun reiterated that the United States was willing to be flexible and reach a "balanced agreement" with the DPRK, should it decide to return to talks, Lee said.

His comment came as ROK is seeking US support for the resumption of inter-Korean cooperation projects that were suspended under international sanctions on Pyongyang.

ALSO READ: DPRK sees 'no need' for another Kim-Trump summit

Moon vowed in his New Year address to seek realistic ways for a broader inter-Korean cooperation while continuing efforts for the success of the DPRK-US denuclearization negotiations.

Kim and Trump met three times in 2018 and 2019, but the talks between Pyongyang and Washington to denuclearize the Korean Peninsula have been stalled since the Hanoi summit between the leaders in February 2019 ended with no agreement.

Kwon Jong-gun, director general of the Department of US Affairs of the DPRK's Foreign Ministry, said Tuesday that the DPRK was unwilling to talk face to face with the United States, urging the ROK to stay away from meddling in Pyongyang's affairs.

Kwon's remarks reaffirmed the statement issued earlier by Choe Son-hui, first vice minister of foreign affairs of the DPRK, who said last weekend that the DPRK had no interest in holding another DPRK-US summit, which was proposed last week by ROK President Moon, before the US presidential election in November.

Trump said on Tuesday he is open to another meeting with Kim and thinks it might be helpful, Voice of America reported, citing a transcript of an interview Trump gave to Atlanta, Georgia-based Gray Television, due to be aired on Sunday.

Kim has been maintaining a low profile in recent months, making far fewer public appearances than usual, according to analysts who monitor his movements.

On Wednesday, DPRK state media reported Kim marked the 26th anniversary of the death of his grandfather, DPRK founding leader Kim Il-sung, by visiting Pyongyang’s Kumsusan Palace of the Sun, which serves as the mausoleum for Kim Il-sung and Kim Jong-il, father of Kim Jong-un.

The report from the official Korean Central News Agency said Kim, together with other senior officials, paid high tribute to the statues of both leaders, and a floral basket in the name of Kim Jong-un was placed at the statues.

Tensions escalated on the peninsula after the DPRK demolished the inter-Korean liaison office building in the DPRK's border city of Kaesong last month in protest against anti-Pyongyang leaflets sent across the border by ROK civic group activists, mostly defectors from the DPRK. Pyongyang has cut off all communication lines with Seoul.