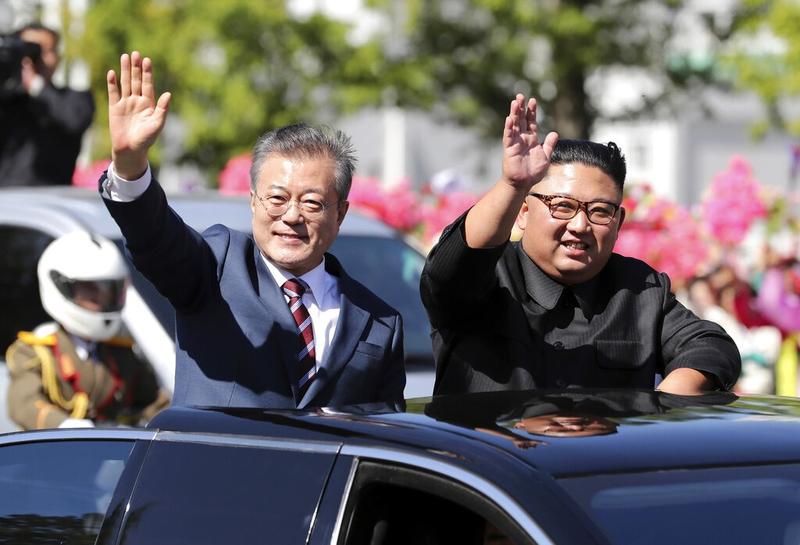 In this Sept 18, 2018 file photo, ROK President Moon Jae-in, left, and DPRK leader Kim Jong-un ride in a car during a parade through a street in Pyongyang. (PYONGYANG PRESS CORPS POOL VIA AP, FILE)

The Republic of Korea's (ROK) President Moon Jae-in urged the Democratic People's Republic of Korea (DPRK) to recommit to peace efforts, as the two rivals faced new tensions on the anniversary of start of the war that engulfed the peninsula 70 years ago.

Moon issued the plea to DPRK leader Kim Jong-un during a speech Thursday recounting the conflict that began on June 25, 1950, and ROK’s subsequent rise to become one of Asia’s most advanced economies. He called continued confrontations between the two sides a “waste of national power” and said peace and unification was a duty owed to those who suffered through the war.

I hope that North Korea will also boldly embark on an endeavor to end the most sorrowful war in world history. If we are going to talk about unification, we have to achieve peace first, and only after peace has continued for a long time will we be able to finally see the door to unification.

“I hope that North Korea will also boldly embark on an endeavor to end the most sorrowful war in world history,” Moon told hundreds of veterans and other dignitaries gathered at Seoul Air Base for the occasion. “If we are going to talk about unification, we have to achieve peace first, and only after peace has continued for a long time will we be able to finally see the door to unification.”

DPRK is also referred to as North Korea and ROK as South Korea.

The speech comes amid a fresh flare-up in tensions between DPRK and ROK, with Kim’s regime blowing up the inter-Korean liaison office. DPRK has accused Moon of undermining agreements signed between the two leaders in 2018 by supporting US pressure campaigns and, more recently, allowing defector groups to send anti-Kim leaflets over the border.

The day before the war anniversary, DPRK announced that Kim had ordered his military to suspend “action plans” against ROK, without elaborating. State media said that Kim told military brass to hold because of the “prevailing situation.”

DPRK state media said little about the anniversary of the conflict, including a short piece Friday about tributes for participants in the “national liberation war.” Earlier Thursday, state media published a statement from a foreign ministry-affiliated research institute that accused the US of perpetuating the conflict and rejected future nuclear talks with Washington.

“It is no less than the despicable double-dealing tactics for the US to talk about a sort of dialogue while maximizing its attempts to oppress the DPRK politically, economically and militarily,” the Institute for Disarmament and Peace said. “And its repeated harping, like an automatic-responding machine, on denuclearization betrays only its brigandish intention to disarm us and open up the way to an aggression war.”

We will continuously search for routes that are mutually beneficial for both Koreas through peace,. Before speaking of unification, I hope that we can become friendly neighbors first.

The Korean War resulted in the death, injury or displacement of millions of Koreans, Americans, Chinese and United Nations troops and civilians, with thousands still unaccounted for. The open fighting ended with an armistice in 1953, but no formal peace treaty was signed.

Moon, 67, is the son of DPRK refugees who settled in ROK during the war and has spent much of his career working toward peace. He was among a group of acolytes of late President Kim Dae-jung, who received the Nobel Peace Prize for his “Sunshine Policy” efforts to hold a then-unprecedented summit with his DPRK counterpart, Kim Jong-il.

Moon and Kim met in a flurry of summits in 2018, agreeing to replace the armistice with a peace treaty by year’s end. Those negotiations stalled as parallel talks between Kim and President Donald Trump bogged down over DPRK’s refusal to meet US disarmament demands.

READ MORE: DPRK foreign minister lashes out at US policy toward Pyongyang

Moon said Seoul wouldn’t attempt to force its system on Pyongyang, noting ROK’s economic advantages over its impoverished rival, which has an economy the size of the US state of Vermont. He also said ROK’s military was “strong enough to repel any provocation from any direction.”

“We will continuously search for routes that are mutually beneficial for both Koreas through peace,” Moon said. “Before speaking of unification, I hope that we can become friendly neighbors first.”