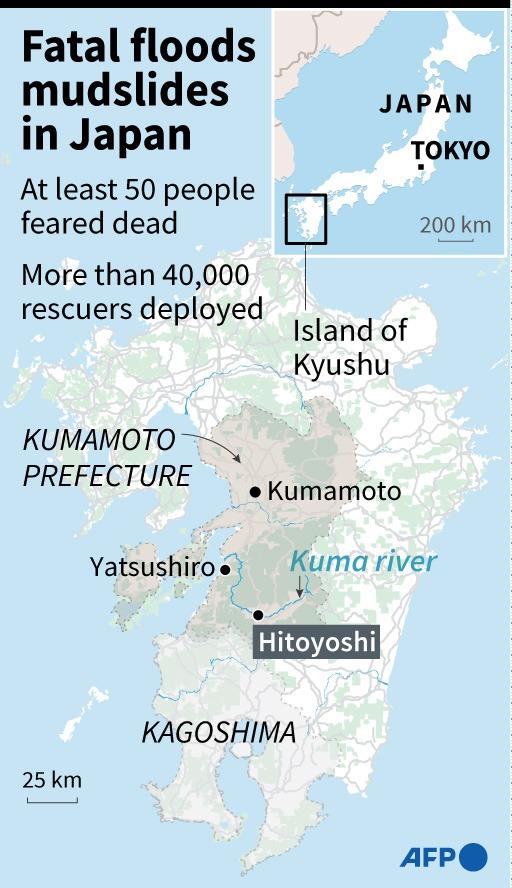 This July 7, 2020 graphic shows a map locating Japan's Kumamoto and Kagoshima prefectures on the southwestern island of Kyushu, where floods and mudslides have killed dozens of people. (GRAPHIC / AFP)

TOKYO - Japan on Tuesday warned of more heavy rain on the southwestern island of Kyushu and bolstered rescue operations as the death toll in flood-hit areas rose past 50 with about a dozen people reported missing.

The government said it would double rescue and relief personnel as heavy rain destroyed homes and caused landslides in what is shaping up to be Japan’s worst natural disaster since Typhoon Hagibis killed 90 people in October.

“Rain is expected over a wide front stretching from western to eastern Japan,” he said. 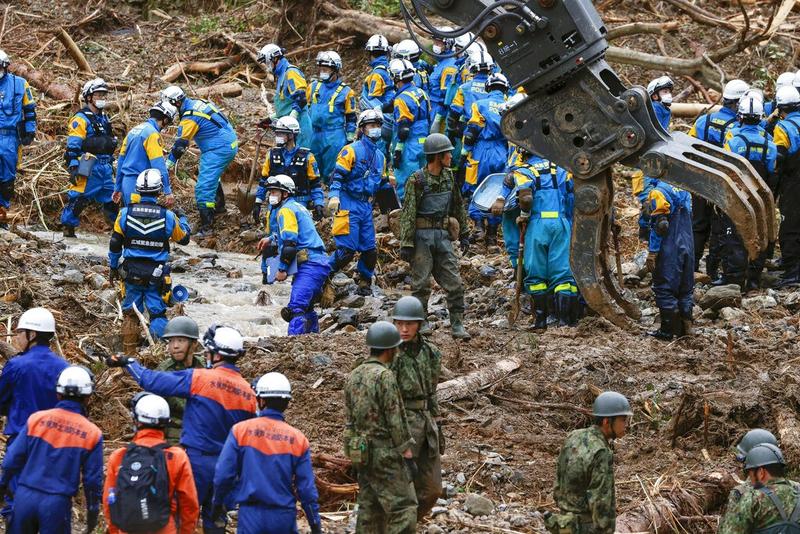 The death toll has risen to 56 with missing, according to public broadcaster NHK. It showed swollen rivers, destroyed homes, roads covered in landslides and stranded residents being plucked to safety by military helicopters.

Kyodo News reported at least 71 landslides across 12 prefectures, citing the land ministry, and said more than 1.3 million people had been ordered to leave their homes.

Prime Minister Shinzo Abe said the government would double rescue and relief personnel, from day-earlier levels, to 80,000, including some 20,000 SDF troops.

Some companies in the region have temporarily halted operations but Suga said he did not expect major disruptions to supply chains, as happened two years ago when deadly floods also hit Kyushu. 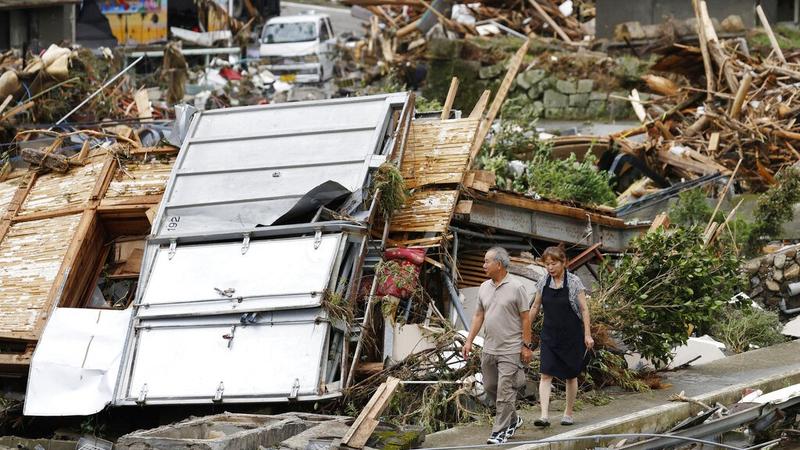 A couple walks near debris from a heavy rain in Kumamura, Kumamoto prefecture, southern Japan, July 6, 2020. (KYODO NEWS VIA AP)

The government will continue to liaise with local firms, Suga said, adding: “We want to quickly take the necessary steps such as support for small and mid-sized firms depending on the situation ahead.”

Carmakers Toyota Motor and Mazda Motor, and electronics conglomerate Panasonic Corp all halted operations at certain plants on Monday due to heavy rain.

Mazda cancelled the second shift at its plants in Hiroshima, and Hofu, Yamaguchi Prefecture, on Tuesday, with plans to open on Wednesday. Panasonic said its sensor plant in Kagoshima was operating normally on Tuesday.

Toyota said it would keep all three of its Kyushu plants closed on Tuesday after halting production the previous evening for safety reasons, with plans to restart on Wednesday.