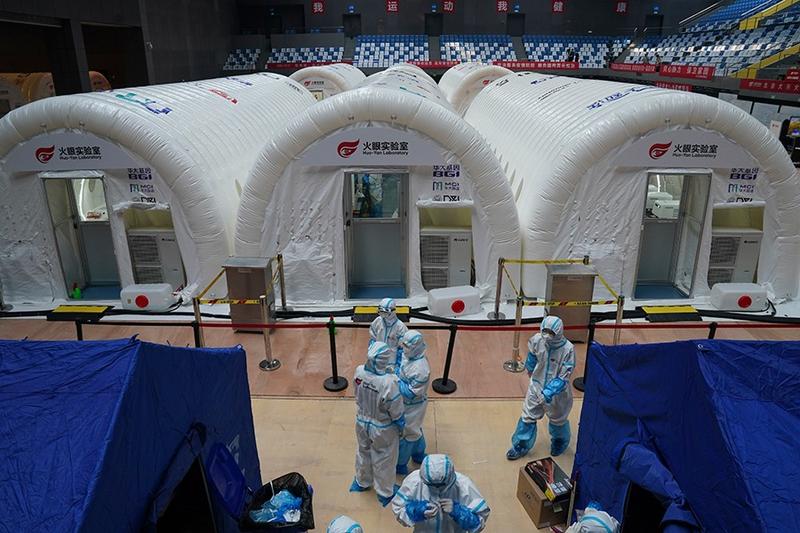 A 56-year-old Beijing resident was taken by ambulance from Beijing Ditan Hospital to a quarantine location on the morning of June 29.

The man, surnamed He, was the first COVID-19 patient in the capital to recover since a new cluster of infections was reported on June 11.

He was discharged from the hospital after being given two nucleic acid tests－both negative－on June 21 and June 26.

I just want to remind everyone to wear a face mask properly. If you have to go to a crowded place, make sure you are protected

He, the first patient in Beijing to recover since the new cluster of infections was reported

Wearing a black T-shirt and blue shorts, He was accompanied by Xu Yanli, the doctor in charge of his case.

A crowd of reporters covering the event was told by He: "I just want to remind everyone to wear a face mask properly. If you have to go to a crowded place, make sure you are protected."

The patient looked well and spoke in a low but powerful voice.

Another hospital employee present when He was discharged wore a full protective suit, on the back of which were four handwritten characters that translate as "welcome home".

When He visited the Xinfadi wholesale market, where all the cases in the new cluster were detected, he pulled his face mask to one side to get some fresh air. 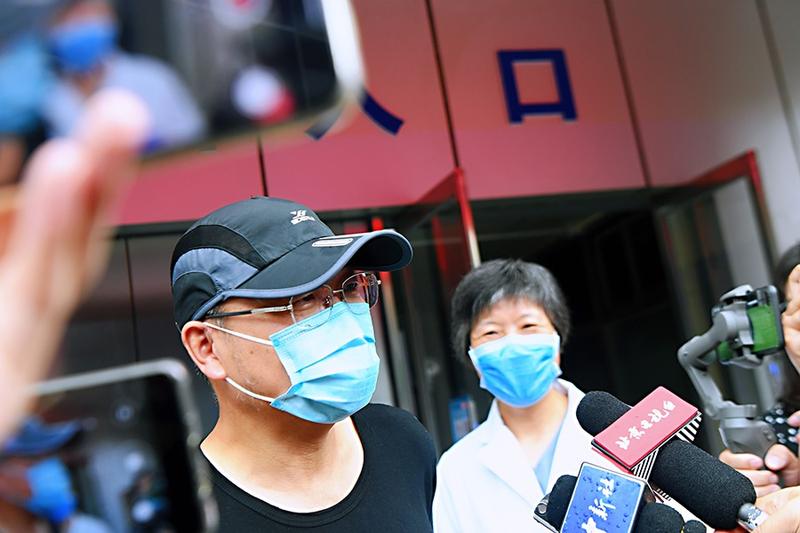 A patient, surnamed He, the first in the capital to recover since the new cluster of infections was reported, is discharged from Beijing Ditan Hospital on June 29, 2020. (YAN TONG / FOR CHINA DAILY)

He remembers going to the market on June 3 to buy mutton, and staying there for about 20 minutes.

The beef and mutton trading hall at the market was later found to be the source of the most of the new infections.

"Two days later, I started feeling tired, but never thought I was infected until I developed a fever on June 12," He said.

Later that day, He went to the hospital when his temperature rose to 38 C, and it was confirmed that he had COVID-19.

Xu, the doctor, said the patient's temperature returned to normal on June 16 and his symptoms, body imaging and laboratory indicators gradually improved.

"He will be quarantined for 14 days and has been asked to return to the hospital for new checks 14 days and 28 days after being discharged," she said.

The patient had been on leave from his job as a bus driver at Beijing Capital International Airport, as shuttle bus services at the facility had been suspended.

Speaking at a news conference on June 30, when the second patient in the cluster to recover was discharged, Wu Guoan, deputy head of Beijing Ditan Hospital, said, "Gradually, more patients will recover and leave hospital.

"All of them will have to undergo centralized quarantine for 14 days before they can return home. So far, we haven't seen any human-to-human infection caused by patients who have recovered."

Xu Hejian, a spokesman for the Beijing municipal government, said that as of Saturday afternoon, nine patients had been discharged from hospital. 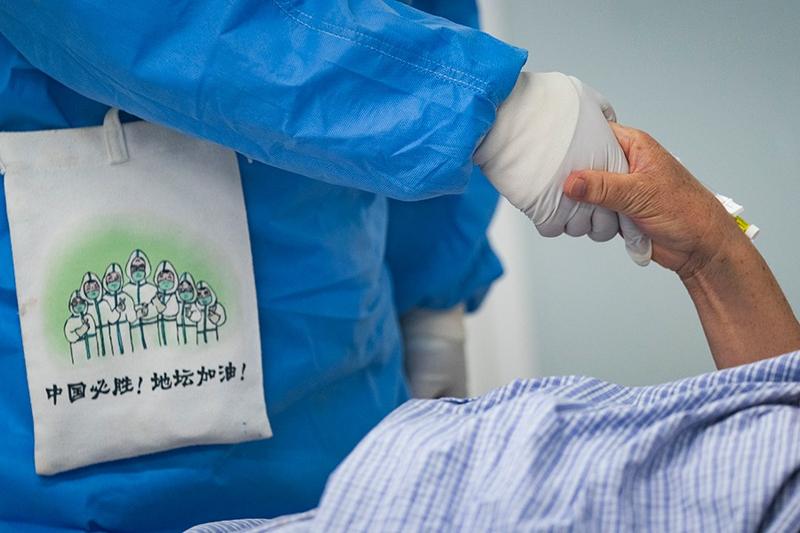 A doctor offers comfort to a patient at the hospital. (TAO RAN / FOR CHINA DAILY)

The capital reported one new infection on Friday, bringing the number of confirmed cases to 332 since the first case in the cluster was detected on June 11, Xu said.

"The number of new local cases has been kept at single digits for six days in a row, which shows that Beijing has contained the spread well," Xu added.

All COVID-19 patients have been sent to Beijing Ditan Hospital in the capital's Chaoyang district. Affiliated to Capital Medical University, the facility is well-known for dealing with infectious diseases.

However, it is not easy receiving a large number of COVID-19 patients in a short period of time and preventing any possibility of nosocomial infections－those caught in a hospital and potentially caused by organisms resistant to antibiotics.

Five days after the hospital received the first case from the cluster, the number of confirmed cases exceeded 100.

On June 16, Beijing raised its public health emergency response from the third to the second level.

On June 18 and June 19, the hospital cleared its inpatient wards to handle COVID-19 cases. The inpatients were transferred to other hospitals in the capital with the help of the city's health authority.

A total of 108 medical workers from other hospitals were sent to Beijing Ditan to help treat patients.

The hospital raised the number of beds for COVID-19 patients to 1,070, with 1,000 for non-severe cases and 70 for those in critical condition. 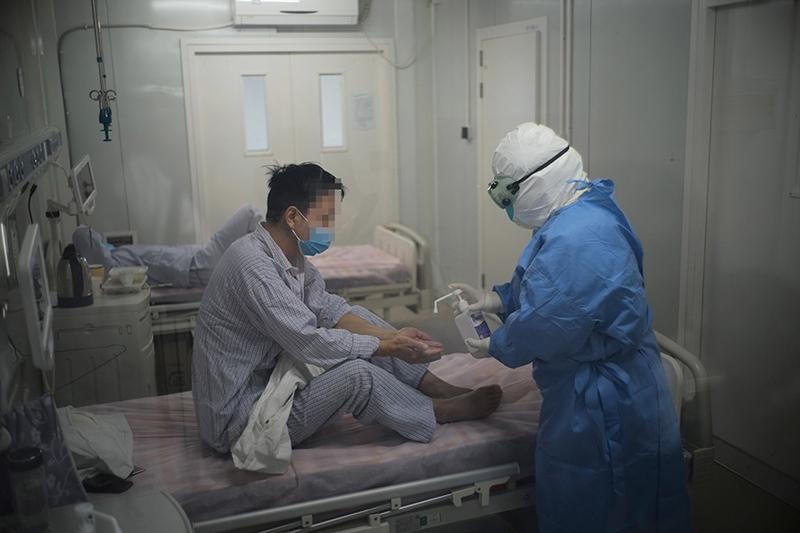 A nurse disinfects a patient at the hospital. (PHOTO / XINHUA)

On the evening of June 18, it rained heavily, with loud claps of thunder.

Someone yelled: "Put testing boxes in safe places. Find somewhere to get medics out of the rain."

At a residential community in Fengtai district, where the Xinfadi market is located, medics took samples from residents, making full use of every second even though it was raining hard.

From time to time, community workers reminded people in the line to keep a distance of at least 1 meter apart.

Next day, the temperature in the area rose to 35 C.

As the temperature rose, community workers delivered 50 large ice bricks to the sample collection site, placing them under medics' feet.

After the new infections occurred, the Fengtai district government suspended operations at the Xinfadi market and swiftly blocked access to 11 residential communities. Schools and kindergartens near the market were closed.

Initially, the main task for the district was to conduct testing to identify those at risk of infection.

By noon on June 19, samples had been taken from more than 300,000 Fengtai residents, as medics worked day and night.

By Thursday, across Beijing, more than 10.41 million residents had received nucleic acid tests since the new cluster of locally transmitted cases emerged in the city. 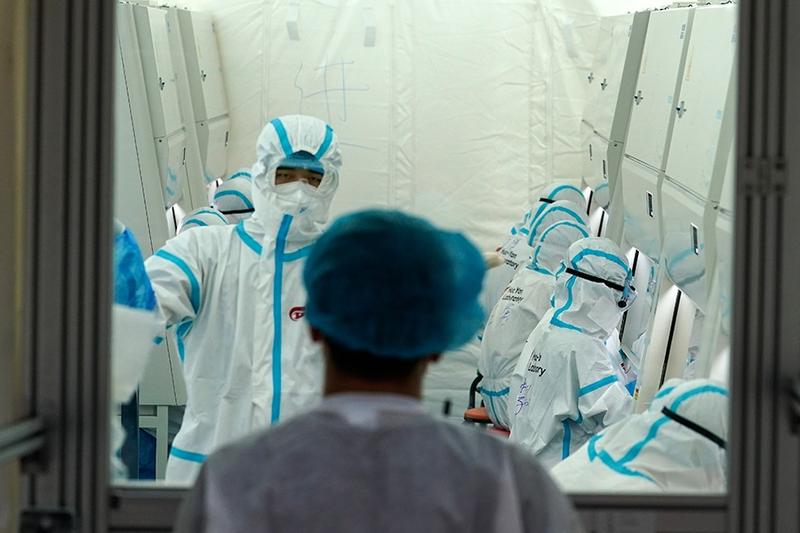 This total was reported at a news conference on Friday by Zhang Qiang, a member of the city's epidemic control office who oversees nucleic acid testing.

About half of the confirmed cases were discovered through testing, according to the authorities.

Zhang said, "The tests are highly instrumental in discovering the source of infection, cutting off transmission channels and stopping the epidemic spreading."

After the first case reported on June 11 was found to be linked to the Xinfadi market, the city government quickly identified people at high risk who had been to the venue. Tests were swiftly carried out on all of them.

The city also introduced strict measures such as rapid detection and screening, centralized and home medical observation for those at high risk, as well as second tests after an observation period.

By June 16, tests had been carried out on 578,000 residents, including traders and workers at the Xinfadi market, residents in the area and people who had contact with the market.

Before the new cluster occurred, the number of nucleic acid testing centers in Beijing had risen from 75 to 170. The centers can now test more than 458,000 samples a day, up from 40,000 early last month.

A total of 2,224 sampling points are in operation every day at 443 locations across the city, 7,589 medical workers have been mobilized, and the number of daily samples has reached 1.21 million.

The city has also mobilized some 400,000 community staff members and volunteers to assist testing sites and provide services.

Zhang said, "Beijing will continue to offer tests to all those who should have them and also to people who want to be tested." 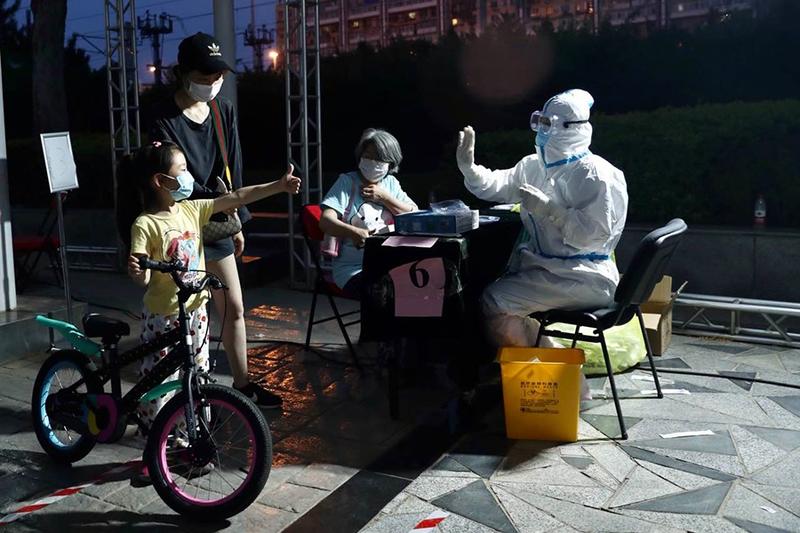 Su Beini, 7, gives the thumbs up to doctors after being tested at a residential area in Dongcheng district last month. (ZOU HONG / CHINA DAILY)

With strict measures taken and prevention work carried out to contain the outbreak, life in the capital is gradually returning to normal.

On Friday, the authorities said that from the following day residents in low-risk areas of the city no longer needed to present negative nucleic acid test results when leaving Beijing.

Pan Xuhong, deputy director of Beijing Public Security Bureau said, "The daily number of new confirmed cases in the city has fallen from 36 at the peak to single digits."

The number of new reported cases has remained at a low level, he added.

On June 30, the access ban at residential communities near the Xinfadi market was lifted, with residents able to enter and leave by showing a pass card and undergoing a temperature check.

Pang Xinghuo, deputy head of the Beijing Center for Disease Control and Prevention, said that since June 11, confirmed COVID-19 cases had been found at 47 communities in 11 districts in the city. At the peak, there were five high-risk communities and 39 with a medium level of risk.

By 3 pm on Saturday, there were two high-risk areas and 26 medium-risk communities in the city.

Searches for flights and train tickets from Beijing to other cities quintupled within 30 minutes of the capital announcing that people could leave without a test result, according to online travel agency Ly.

Liu Lin, an office worker in her 30s, who immediately booked a ticket to Sanya, a tourist destination in Hainan province, said she had been waiting too long for this trip.

"I believe Beijing will get everything back to normal soon," she said.

Li Yuan, chief executive of a technology company in Beijing, who is also in his 30s, said he was glad to hear news of the relaxed policy, as it would enable marketing managers to take business trips without spending time on tests.

"Hopefully, sales for my businesses can recover soon," he said.