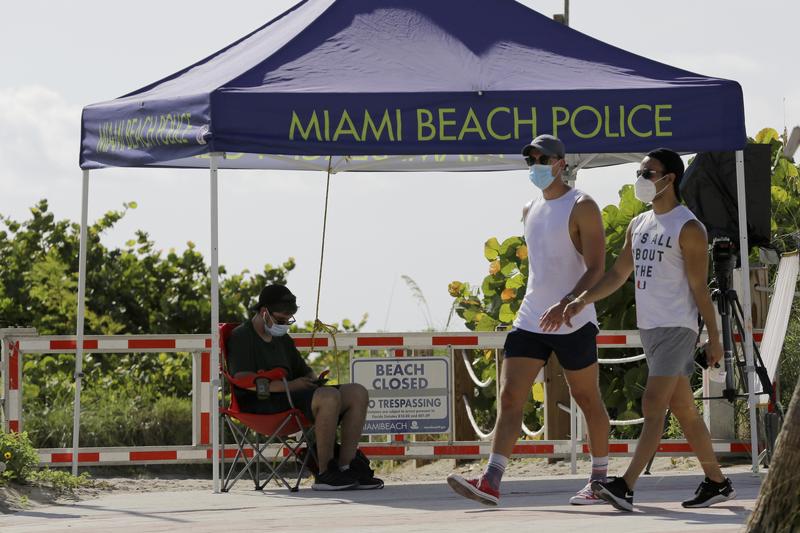 North Carolina, South Carolina, Tennessee, Alaska, Missouri, Idaho and Alabama all registered new daily highs in cases of COVID-19, the illness caused by the novel coronavirus. Texas hit a new peak for hospitalizations, with one doctor calling for a "complete lockdown" in the state to get the virus under control.

Active coronavirus infections in Italy dropped to 14,884 on Friday from 15,060 a day earlier, the Health Ministry stated in its daily bulletin

The recent surge, most pronounced in southern and western states, has alarmed public health officials, who urged caution ahead of a July 4th holiday weekend to celebrate the Declaration of Independence of the United States in 1776.

North Carolina, for one, reported 951 hospitalizations and 2,099 cases, both record highs.

Despite the jump in infections, the average daily death toll in the United States has gradually declined in recent weeks, a reflection of the growing proportion of positive tests among younger, healthier people who are less prone to severe outcomes.

However, US Surgeon General Jerome Adams warned that the impact on fatalities from the recent surge, which started in mid-June, had yet to be seen. "Deaths lag at least two weeks and can lag even more," he told "Fox & Friends" on Friday.

Kimberly Guilfoyle, the girlfriend of US President Donald Trump’s eldest son and a top fund-raising official for the Trump re-election campaign, tested positive for the coronavirus on Friday before a Fourth of July event at Mount Rushmore, New York Times reported, citing a person familiar with her condition. Trump campaign later confirmed Guilfoyle has contracted the virus.

Global confirmed COVID-19 cases topped 11 million on Friday, reaching 11,031,905 as of 6:33 pm (2233 GMT), according to data compiled by the Center for Systems Science and Engineering (CSSE) at Johns Hopkins University.

A total of 523,777 people worldwide have died of the disease, the data showed.

The United States suffered the most from the pandemic, with 2,788,395 cases and a death toll of 129,306, the tally showed. The country's daily new cases kept breaking record in recent days, adding over 52,000 on Thursday.

Countries with more than 250,000 cases also include Brazil, Russia, India, Peru, Chile, Britain, and Spain. Cases outside China has exceeded 10.9 million, according to the CSSE. 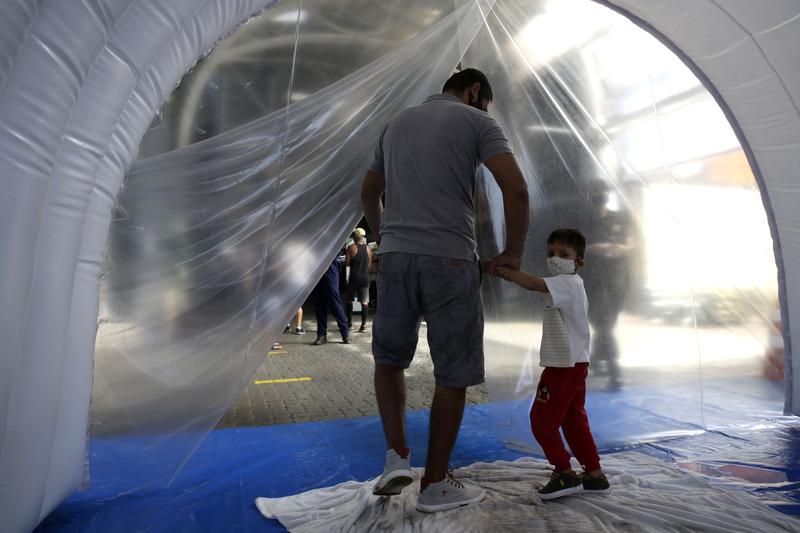 A father and son pass through a disinfection tunnel amid the COVID-19 pandemic before entering a market of imported products in Brasilia, Brazil, July 3, 2020. (ERALDO PERES / AP)

Brazil registered 42,223 additional coronavirus cases in the past 24 hours, the Health Ministry said on Friday, bringing the total tally to 1,539,081, the second-worst outbreak in the world behind the United States.

Brazilian President Jair Bolsonaro has exercised his veto power to water down parts of a national law that would require the use of face masks on public transportation, in commercial and religious establishments and other enclosed public spaces, the nation's Official Gazette reported on Friday.

The law, approved by Congress on June 9, stipulates fines for those who do not wear masks in public places, but this part was vetoed by Bolsonaro, who argued that it may violate the rights of those meeting in their homes for business or other purposes.

The president also vetoed a paragraph that obligated the government to provide masks to economically vulnerable sectors of the population, as well as a clause requiring companies to provide free masks to employees.

Several local governments have adopted the mandatory use of masks in public places, but no law had previously been enacted at the national level.

Local authorities are digging mass graves at cemeteries across Bolivia to receive a new wave of victims from COVID-19, unnerving Bolivians as the outbreak rips across the Andean nation.

Bolivia has registered 35,500 cases of the virus and 1,200 deaths. Though the tally is low in comparison with neighbors Peru, Chile and Brazil, new cases have spiked in recent weeks, overwhelming the country´s fragile health care system in some areas.

Cochabamba, a central Bolivian city, has been especially hard hit. Back-hoes and trucks there are opening up large pits in which to bury the most recent casualties.

The landlocked country of 11.7 million people registered its first novel coronavirus infections on March 10. But cases have since spiked as the country eased up restrictions to allow its ailing economy to revive.

Egypt reported on Friday 1,412 new COVID-19 infections, bringing the total cases in the country to 72,711, said the Health Ministry.

According to Health Ministry spokesman Khaled Megahed, 81 patients died from the novel coronavirus, raising the death toll to 3,201.

Some 402 patients were completely cured and discharged from hospitals, taking the total recoveries to 19,690, the spokesman said.

Megahed underlined Egypt's close cooperation with the World Health Organization regarding the pandemic.

Egypt announced its first confirmed COVID-19 case on Feb. 14 and the first death from the highly infectious virus on March 8. 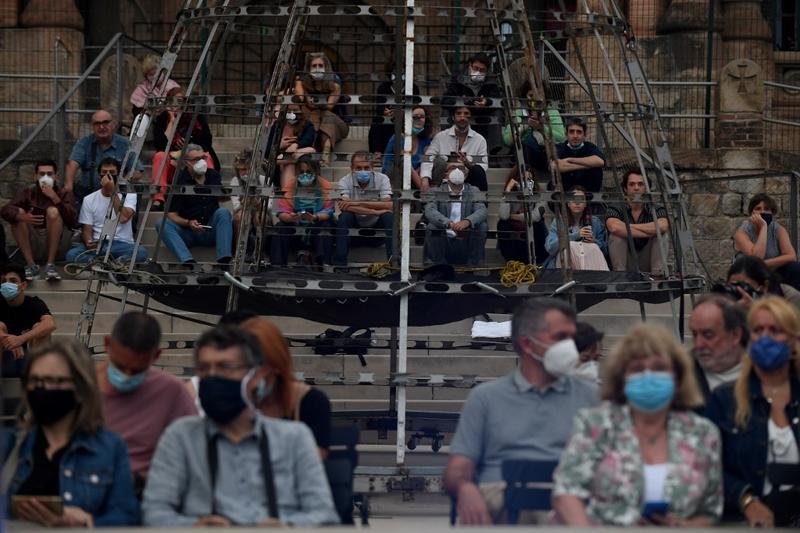 The number of deaths in France from the new coronavirus has risen by 18 over the last day to 29,893, the country's health department said on Friday.

The number of people in intensive care units fell by 13 to 560, continuing a weeks-long downtrend.

The number of confirmed coronavirus cases in Germany increased by 422 to 196,096, data from the Robert Koch Institute (RKI) for infectious diseases showed on Saturday.

The reported death toll rose by 7 to 9,010, the tallyshowed.

Active coronavirus infections in Italy dropped to 14,884 on Friday from 15,060 a day earlier, the Health Ministry stated in its daily bulletin.

It marked the lowest figure since March 13, according to official statistics.

Of all those actively infected, the vast majority, or 13,849, are isolated at home because they are asymptomatic or with mild symptoms, while 956 patients are hospitalized with symptoms, and 79 are in intensive care units.

However, the total number of COVID-19 cases overall assessed in the country grew by 223 to 241,184 compared to the previous day, the ministry said.

Totally 15 new fatalities were registered over the last 24 hours, which brought the country's death toll to 34,833.

Those recovered since the pandemic broke out in the northern regions on Feb 21 have reached 191,467.

Mexico on Friday reported 6,740 new coronavirus infections, taking the country's total to 245,251 cases, more than Italy and the ninth-highest tally worldwide, according to a Reuters count.

Friday's new cases were just one less than the record number reported on Thursday in Mexico.

More than two months after President Andres Manuel Lopez Obrador said Mexico had tamed the pandemic, the country has in recent weeks been posting some of the highest daily death tolls worldwide alongside Brazil and the United States.

The health ministry has said examinations of recent fatalities in Mexico could bump up the numbers further, especially as the country tries to revive its battered economy.

Mexico's government has said the real number of infected people is likely significantly higher than the confirmed cases.

A total of 319 new COVID-19 cases were confirmed in Morocco on Friday, bringing the total number of coronavirus cases in the country to 13,228.

The number of the patients cured increased to 9,160 with 70 new recoveries, said Hind Ezzine, head of the Department of Epidemic Diseases of the Ministry of Health, at a regular press briefing.

Ezzine said that the country's COVID-19 death toll stood at 230, as one new fatality was recorded in the last 24 hours.

Some 719,206 diagnostic tests for COVID-19 have been carried out in Morocco since the start of the outbreak in the country on March 2, she said, adding that the number of active cases stands at 3,898, including 19 cases in intensive care units.

Russia on Saturday reported 6,632 new cases of the novel coronavirus, raising the nationwide tally of infections to 674,515.

The authorities said that 168 people had died in the last 24 hours, bringing the official death toll to 10,027.

The country recorded 9,063 new cases in the past 24 hours, bringing the tally to 177,124, according to the latest figures released by Health Minister Zweli Mkhize.

The death toll has reached 2,952, of which 108 have been reported since Thursday.

The country has witnessed sharp rises in both confirmed cases and related deaths since the relaxation of lockdown restrictions on May 1.

This prompted calls for pushing the lockdown to higher levels in areas hit hard by the pandemic.

The Spanish Health Ministry on Friday reported that 21 people have died of the COVID-19 over the past seven days in the country, and 2,028 new cases have been detected over the same period.

The new figure is higher than the 1,758 new infections reported in the previous seven days.

The ministry also said that 42 localized outbreaks of the COVID-19 are now active in Spain, twice as many as that on June 26. 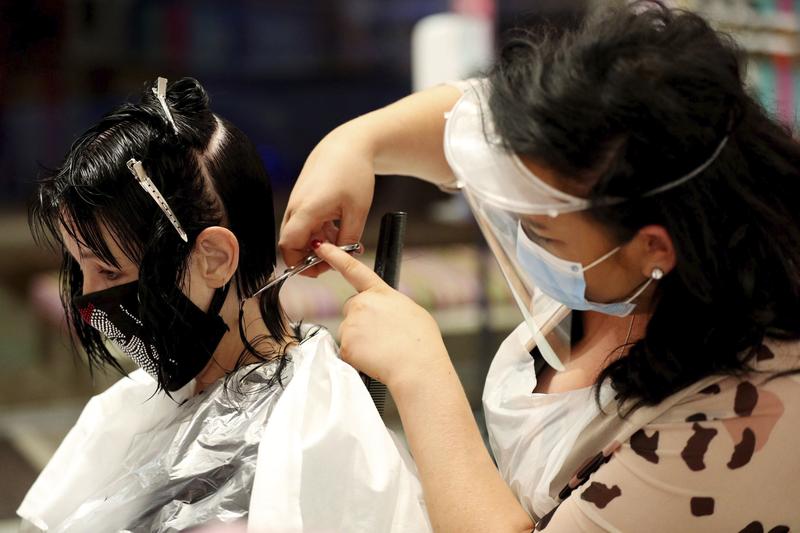 A stylist, right, cuts the hair of a client at Tusk Hair in Camden, London, after opening at midnight to the first post-lockdown customer as restrictions are eased across England, July 4, 2020. (JONATHAN BRADY / PA VIA AP)

England takes its biggest steps yet towards resumption of normal life on Saturday as people are finally allowed to drink in a pub, get a haircut or have a meal in a restaurant for the first time in over three months.

Prime Minister Boris Johnson said everybody had to behave responsibly and maintain social distancing to support businesses and not risk a second wave of the coronavirus.

Some hairdressers were reported to have opened at the stroke of midnight while pubs will be allowed to start serving from 0500 GMT on so-called "Super Saturday", sparking worries of pent-up over-indulgence.

READ MORE: England's schools to re-open from Sept in boost for economy

Johnson said his message was to "enjoy summer safely" and not undo the progress made in knocking back the pandemic.

He said workers in pubs, restaurants, hairdressers and other businesses had made an heroic effort to prepare for reopening.

"The success of these businesses, the livelihoods of those who rely on them, and ultimately the economic health of the whole country is dependent on every single one of us acting responsibly," he said. "We must not let them down."

Police said they were "absolutely prepared" for the pubs reopening.

But customers might find the atmosphere inside rather different from the usual Saturday-night scrum.

Numbers will be limited, no one will be allowed to stand at the bar and there will be no live music. Patrons will also have to give their details to allow tracers to identify them if anyone later tests positive.