By Cao Desheng in Beijing and Chen Weihua in Brussels 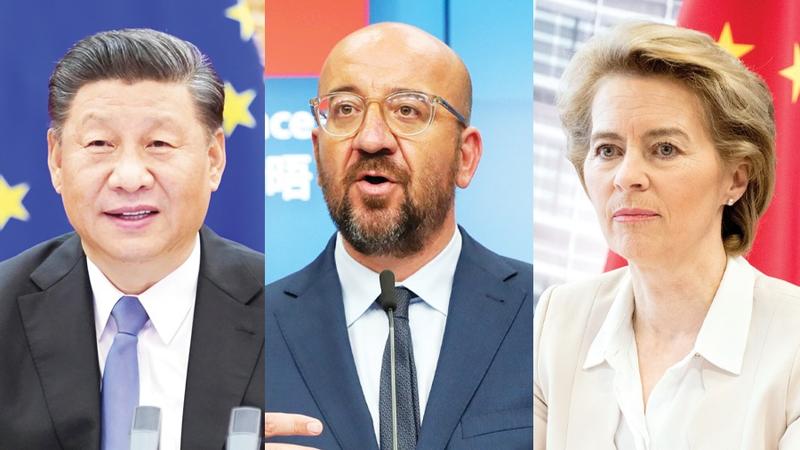 The just-concluded first official meeting between Chinese leaders and the new European Union leadership via video link has demonstrated the commitment of the two major global players to support each other in upholding multilateralism and an open economy for world peace and development, officials and experts said.

In the virtual meeting with European Council President Charles Michel and European Commission President Ursula von der Leyen on June 22, President Xi Jinping called on China and the EU to build a more stable and mature relationship in the post-COVID-19 era and lift their ties to a new height.

Saying China is “a partner, not a rival” to the EU, Xi said there is no conflict of fundamental interests between China and the EU, and cooperation far outweighs competition and consensus far outweighs disagreement.

He underlined the need for China and the EU to act as two major players to maintain global peace and stability, two major markets to promote global prosperity and development, and two major civilizations to uphold multilateralism and improve global governance.

Wang Lutong, director-general of the European Affairs Department of the Ministry of Foreign Affairs, said the meeting produced a series of important consensuses between the Chinese and EU leaders that “fully demonstrate the strategic, comprehensive and mutually beneficial nature of the China-EU relationship”.

As one of the most important outcomes of the meeting, the Chinese and EU leaders agreed to conclude the negotiations on a “comprehensive, balanced and high-level” bilateral investment agreement sometime this year, Wang said, adding that the two sides have held 29 rounds of negotiations on the agreement and substantial progress has been made.

Both agreed to sign the China-EU Agreement on Geographical Indications in the near future, he said. They also reached consensus on upholding multilateralism and free trade, opposing unilateralism and protectionism, jointly pushing for global economic recovery and ensuring the stability of global industrial and supply chains.

A news release issued by the EU after the meeting described the China-EU relationship as a “complex and vital partnership”. While speaking about EU-China relations, Michel said economic interdependency between the two sides is high, and “we must work together on global challenges like climate action, meeting the (United Nations’) Sustainable Development Goals or dealing with COVID-19”.

“Engaging and cooperating with China is both an opportunity and necessity,” Michel was quoted by media as saying.

Von der Leyen, while addressing a news conference after the meeting in Brussels on June 22, said it’s “not possible to shape the world of tomorrow without a strong EU-China partnership”. She said it was time to accelerate on the very crucial areas of the relationship.

Experts said the intensive interactions between China and the EU in the months since the novel coronavirus outbreak began have sent a message that cooperation remains the overarching principle in their ties, despite differences.

Fraser Cameron, director of the EU-Asia Centre, said the meeting was a good opportunity for the new EU leadership team to get to know their Chinese partners and have a frank and open discussion on many areas of agreement, such as the Iranian nuclear issue and climate change, as well as areas of disagreement, such as market access and industrial subsidies.

“If the strategic partnership is going to bear fruit, it will be important to follow up and achieve concrete results, especially on the trade front,” Cameron said.

Lin Gai, secretary-general of the EU-China Friendship Group in the European Parliament, noted that COVID-19 has damaged the economy of many countries.

“The EU and China need each other more than ever before, especially in medical care, biological sciences, big data, artificial intelligence, food and commodities trade, tourism, culture and other fields,” he said.

“A deeper, broader, more scientific and effective cooperation relationship will help both sides resume economic development in the post-epidemic period,” he said.