The Smart City movement began in the 1990s. It is gaining urgency as the global population by 2050 is projected to exceed 9 billion, of which 85 percent will reside in cities, according to the European Commission’s website. Today, cities make up just 3 percent of the planet’s landmass, housing 55 percent of the population, but consume 80 percent of Earth’s natural resources, according to data from the United Nations. Cities also generate carbon emissions and plastic waste, which pollute the air and the oceans. A better way to manage urbanization for humanity and planet Earth has to be found, and fast.

“Internet of Things” connectivity is the backbone for smart cities to optimize public assets and services; upgrade the economy, society, healthcare, the environment, and the quality of life; and boost commercial value. IoT streams data between related sensors, devices, and networks within dedicated clouds for real-time big data analysis to trigger timely alerts and action. The sensors can be light- and temperature-sensitive, optical, audio, or use radio-frequency identification to monitor and automate response.

But IoT development is too recent. Manufacturers of devices and sensors have no international benchmarks to meet for security, accuracy, and interoperability. Without a globally agreed standard for IoT implementation, networks will remain isolated, lacking data compatibility and sharing, trapped in proprietary hardware and software. That is suboptimal, uneconomic, and wasteful.

Hong Kong, at 37th, significantly trails Singapore, which takes the No 1 position in the IMD Smart City Index 2019 — the only global index of its kind — which factors a “citizen-centric” measurement of how a city’s infrastructure and smart technology balances efficiency and economic value with quality of life for its people.

Fortunately, the pioneering work of Dr Tsang Kimfung at City University of Hong Kong is about to resolve the IoT standardization challenge. In 2018, the IEEE Standards Association appointed Tsang to chair the international working group to develop the IEEE P2668 Standard for IoT technology. It will factor security, latency, interference and interoperability. Tsang expects the world’s first IoT performance standard to be available by mid-2021.

Hong Kong Science Park, Cyberport, the Hong Kong Productivity Council, and some large corporations are already testing the prototype IEEE P2668 to benchmark their respective IoT systems. “A worldwide standard will boost Hong Kong’s IoT market by accelerating the development of the industry value chain,” Tsang told China Daily. “When the standard is available, IoT technology solution providers can launch products for Hong Kong and the world. The government can rely on the standard to procure IoT services.”

Tsang teaches and conducts research at the Department of Electronic Engineering at City University. Tsang has designed a host of wireless IoT infrastructure designs for residential and office buildings to manage energy, track locations, automation, healthcare, etc. In 2016, the Hong Kong IoT Industry Advisory Council and GS1 Hong Kong, the barcode organization, awarded Tsang the title of “Hero of IoT” for his considerable body of work and his leadership.

“Hong Kong’s IoT industry is still quite fragmented. There is no clear use-case model by industry,” said Marcos Chow, KPMG China partner and Hong Kong head of technology enablement. “Many entrepreneurs are still searching for which industry vertical they should focus on — logistics, construction, traffic, buildings, or manufacturing.”

Chow said IoT companies need to consider the issues of security, privacy and trust when launching their services. How these factors weigh on client businesses depend on the industry, regulations, firm size, technology readiness, organization complexity, and the support from executive management. It is a complex matrix for enterprises to negotiate on their own. They need guidance and networks to succeed.

Industry experts say Hong Kong has several advantages in infrastructure for IoT deployment. It is powered by efficient telecommunication networks to cope with the smart city IoT generation of 24/7 data flows. The city had 36,300 wireless networking technology networks by the end of 2019 that enable local telecommunication carriers to transmit data. That will be further enhanced with the launch of 5G services and blockchain technology.

The government will release Blueprint 2.0 soon on the progress of 76 ongoing initiatives in six selected categories of the Smart City Blueprint 1.0 of December 2017. A further 100 initiatives will be set out in Blueprint 2.0. The Hong Kong Science Park has already nurtured 60 startups to provide more than 100 end-to-end IoT technology solutions.

Under the Smart City Blueprint, sensors are deployed at all strategic roads for traffic data; remote sensing devices monitor air pollution, and cleanliness of streets and public spaces; RFID and Bluetooth technologies track vital data on patients for public healthcare management in smart hospitals; and smart lampposts track weather, environment, and traffic at the district level.

The government will also launch a trial program to develop a smart drainage/flood monitoring system in Sha Tin and Tai Po with the application of the governmentwide Internet of Things Network. A Long-Range Wide Area Network Smart Toilet Sensing System detects occupancy, odor level, water leakage, toilet faults, toilet supplies, temperature, and the humidity of public toilets in the city.

Isolating infection risk is an urgent and critical task for Hong Kong. Infected residents and incoming visitors must be quarantined 14 days to prevent the spread of COVID-19. A low-energy Bluetooth wristband paired with a dedicated mobile app and geo-fencing technology monitors the quarantine isolation effectively.

The system is from Compathnion, a Hong Kong Science Park incubated startup, which developed its proprietary fusion technology device, combining Global Positioning System technology and Wi-Fi. Compathnion claimed its device does not compromise data privacy because it does not track the location of the individual.

Compathnion Technology’s founder and lead data scientist, Arthur Chan Chi-chuen, hopes an international IoT standard will be available for local technology companies to compete internationally. “Without these standards, local players will tailor solutions only to cater to the domestic Hong Kong market, crimping their competitiveness for the international market. Startups must proactively think how their products can be applied to other business and technology contexts.”

On construction sites, IoT networks can more efficiently utilize the expertise of engineers and technicians to deploy the best engineering practices remotely with online data and analytics. Worker safety can also be safeguarded with critical detection sensors in danger zones.

To enhance Hong Kong’s competitiveness, diversify its economy, and upgrade the value chain, Hong Kong is embarking on Industry 4.0 Reindustrialization. The Hong Kong Science and Technology Parks Corp is developing its data technology hub and the advanced manufacturing center, scheduled to be opened in the first half of this year and 2022 respectively.

The government injected HK$2 billion ($258 million) to build a microelectronics center to provide smart production and advanced assembly of high value-added manufacturing products and IoT devices by 2022. It will be located over a 1.1 million-square foot zone at the Tseung Kwan O Industrial Estate. A fund-matching subsidy program will be available for manufacturers. Guidelines for application are expected by July from the Technology and Innovation Bureau.

The most ambitious, and yet untested, component of Hong Kong’s reindustrialization program is the 87 hectare Hong Kong-Shenzhen Innovation and Technology Park at the Lok Ma Chau Loop, on the northern border, to tap Shenzhen’s digital and manufacturing strengths as well. Already, HK$20 billion has been allocated to pour concrete there to establish a world-class manufacturing base over the next decade. Cyberport, an incubator for digital startups, has also been allocated HK$5.5 billion in the recent budget to expand its scope.

All these multipronged reindustrialization infrastructure investments are Hong Kong’s long-overdue measures to capture new technology leadership, where data privacy can be trusted by international trading partners and consumers.

Hong Kong’s respected independent judiciary, integrity of legal contracts, and protection for intellectual property rights, long taken for granted, are now being questioned by its European and US trading partners. If that bedrock foundation is damaged, the whole reindustrialization program could unravel.

An Innovation and Technology Bureau spokesperson responded to China Daily queries by saying: “Our ultimate goal is to respond more promptly and effectively to changing circumstances and needs of the public so that they can experience in a tangible way the efficiency and convenience of living in a smart city.” 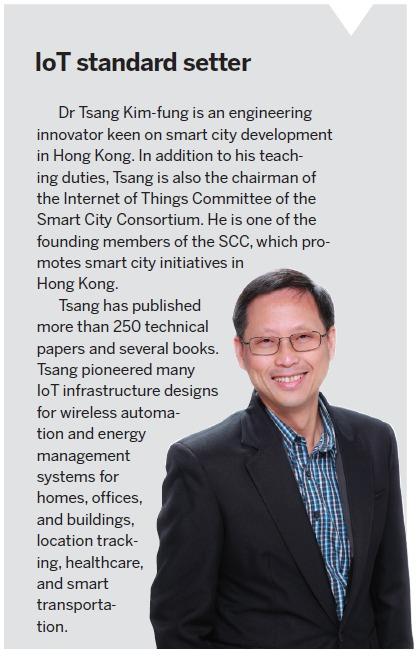