Envoy: US Indo-Pacific strategy not in line with regional interests 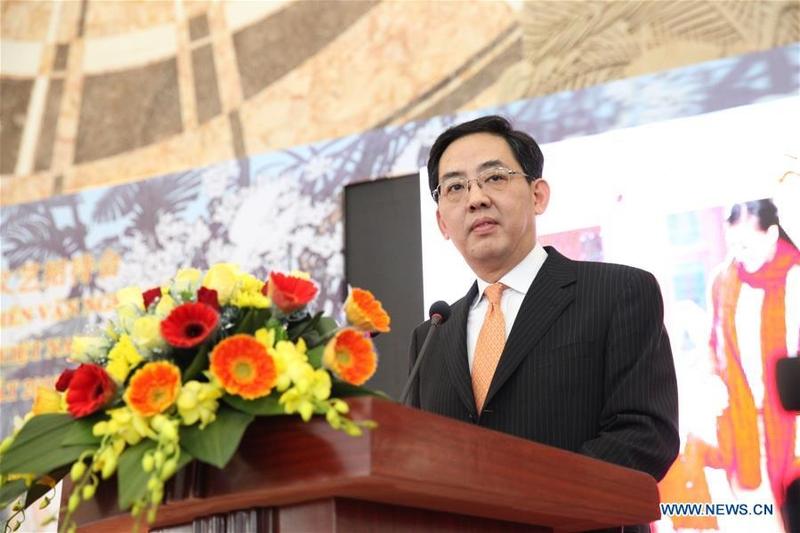 Hong Xiaoyong, then-Chinese Ambassador to Vietnam, addresses a reception marking the 68th anniversary of the establishment of diplomatic relations between China and Vietnam as well as the upcoming Spring Festival in Hanoi, Vietnam, Jan 20, 2018. (PHOTO / XINHUA)

SINGAPORE - The so-called "Indo-Pacific strategy" does not fit with the common interests of the region and is just a US effort to create regional divisions to contain China, Chinese Ambassador to Singapore Hong Xiaoyong said in an article published on Monday.

The article published in The Straits Times and titled "Cooperation or confrontation? The way ahead for the region" is in response to an article by US Secretary of Defence Mark Esper claiming about the "goodness" of the strategy, published by the same media on June 15.

By labelling China as a threat in the region and declaring the US intention to join forces with its partners to deter China, the United States showed its attempt to cause friction between major powers and add to the tension in the region, Hong said

Hong said that Esper's article firstly flaunts the powerful military presence of the United States and its deployment of advanced weapons in the region.

Secondly, by labelling China as a threat in the region and declaring the US intention to join forces with its partners to deter China, the United States showed its attempt to cause friction between major powers and add to the tension in the region, he added.

The so-called strategy revives the Cold War mentality in an effort to create divisions along the lines of ideology, Hong said.

The South China Sea issue, Hong said, is again used by Esper to sow discord between China and the regional countries, with blatant disregard for the general stable and positive state of affairs, and ignoring the fact that China and ASEAN member states are focused on resolving their differences through dialogue.

Reality has proven that such geopolitical strategies, coloured by militarism and self-interest, do not fit with the common interests of the region, and run contrary to the stance of cooperation and working towards development for all, the diplomat said.

Noting that the US strategy came at a time when the country launched a trade war with China and escalated containment against China, Hong pointed out that its goal is to localize US deterrence policies and divide the regional countries into groups.

"Should the region adopt a framework for unity and cooperation, or one of confronting camps?" He raised the question in the article.

Recalling the disastrous results of similar US strategies in recent years in other regions of the world, he said, "As the Indo-Pacific Strategy comes to this region, a big concern comes to all."

"Unity, cooperation and development for all is the right direction for our times," he said, adding that "manoeuvring superpowers against each other for one's sole interest will not solve any problem - it will only harm everybody's interest."

"China is committed to maintaining peace and stability, and advancing development and prosperity in foreign diplomacy," he said.

"China's development is never a threat to peace in the region," he stressed, adding that "China looks forward to propelling a China-US relationship based on coordination, cooperation and stability."