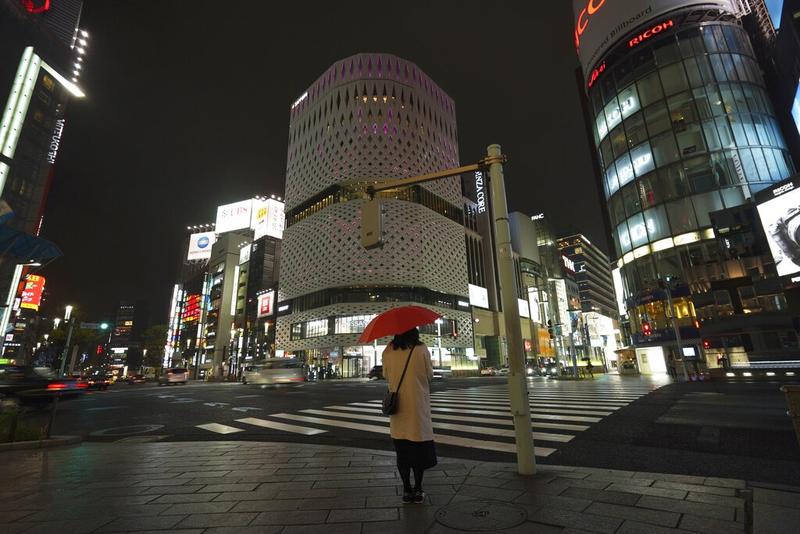 In this March 28, 2020 file photo, a woman stands at an empty Ginza shopping district in Tokyo, Japan. (EUGENE HOSHIKO / AP)

TOKYO - Japan's economy braced for its worst postwar slump even as first-quarter gross domestic product (GDP) contracted less than initially thought, as the cornonavirus crisis slams the brakes on global growth and raises pressure on Tokyo to cushion the blow to business and consumers.

Banks are doing their bit to help as lending rose at the fastest annual pace on record in May, a sign companies were tapping loans to meet immediate funding needs to survive slumping sales from the pandemic.

While US and European policymakers have shifted from crisis-response to efforts to prop up growth, Japan is struggling to do so as it continues to focus on preventing a second wave of infection.

A series of recent data including exports, factory output and jobs figures suggested Japan is facing its worst postwar slump in the current quarter

But few analysts were hopeful about the outlook for the year since capital spending data used to calculate the revised figures lacked enough responses - most struggling firms appear not to have participated in the survey - and will be updated in July.

On the whole, Monday's revised GDP estimate confirmed Japan had slipped into recession - defined as two straight quarters of contraction - for the first time in 4-1/2 years, even before lockdown steps to contain the virus was put in place in April.

"The upward revision to Q1 GDP displayed in the revised estimate is cold comfort given that output is plummeting this quarter," said Tom Learmouth, economist at Capital Economics.

Senior economist at Oxford Economics, Stefan Angrick, concurred: "With the bulk of the impact from the coronavirus pandemic to be felt in Q2, the outlook for 2020 thus remains extremely challenging."

A series of recent data including exports, factory output and jobs figures suggested Japan is facing its worst postwar slump in the current quarter, a period when Prime Minister Shinzo Abe announced a state of emergency requesting citizens to stay home and businesses to close.

Although the emergency was lifted in late May, the economy is expected to recover only moderately in coming months, underlining the pandemic's sweeping impact.

The surge in bank lending, shown in BOJ data also released on Monday, suggests companies are being forced to hoard cash just to stay afloat - and that the worst is yet to come.

The head of Japan's ANA Holdings Inc said the airline will cut unprofitable international routes to cope with the hit from the pandemic, according to the Asahi newspaper.

Tokyo policymakers are moving fast to stop the bleeding.

Japan's parliament will begin deliberating on Monday a second supplementary budget to fund part of a fresh US$1.1 trillion stimulus package that includes loan schemes and a framework to inject capital into struggling firms.

The central bank will scrutinize at its rate review next week whether additional steps are needed. But it is seen maintaining its projection of a moderate economic recovery in the latter half of this year, sources said.

A surprise calm in markets could offer Japanese policymakers some breathing space before considering bolder steps.

Japanese shares climbed to a 3-1/2-month high on Monday after an unexpected increase in US employment gave investors further confidence of a swift global recovery.

"If you look at the Japanese stock market, it certainly suggests that additional monetary easing is not necessary," said Ayako Sera, market strategist at Sumitomo Mitsui Trust Bank.

"The BOJ has already done a lot to respond to the immediate crisis."