Crimes by juveniles on rebound

The white book reviewed judicial protection work of minors from 2014 to 2019.

From 2014 to 2019, procuratorial organs investigated and arrested more than 284,000 juvenile suspects, of which nearly 89,000 were dismissed after investigations.

The principle of "educating first and punishing second" is the basic policy for juveniles involved in crimes, said Shi Weizhong, director of the SPP's ninth procuratorial office.

Shi said that protection, education and control are indispensable when dealing with minors.

For those who committed minor crimes, the procuratorates give priority to education or lenient punishment or conditionally exempt them from prosecution, Shi said.

ALSO READ: China to severely punish use of minors in organized crime

For minors who have not reached the age of criminal responsibility, the procuratorate takes measures including judicial admonition, pushing compulsory family education and guidance to parents and urging minors involved in serious crimes to be either sent to special schools or taken into custody so that they will not commit crimes again, Shi said.

The procuratorate is gradually establishing and improving a hierarchical intervention system for delinquent minors and strengthening judicial protection for juveniles involved in crimes, the director said. 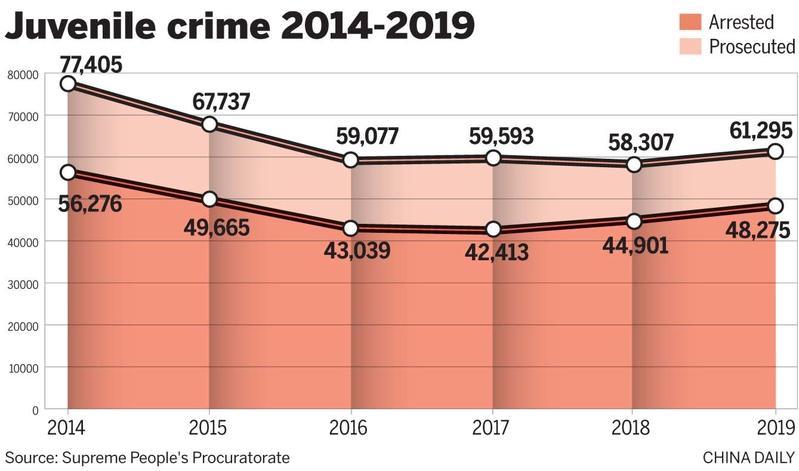 The SPP, together with eight other departments, issued a trial document on May 29 on the establishment of a compulsory reporting system to strengthen the judicial protection of minors and punish those who commit crimes against them in a timely and effective manner.

The procuratorate is actively promoting the establishment of a database on criminals who have sexually assaulted minors, and an employment enquiry system to prevent people with a history of such crimes having close contact with minors.

Procuratorial organs across the country, in collaboration with competent education authorities, inspected 38,600 primary and middle schools and kindergartens last year, and supervised the rectification of more than 6,600 safety problems, Shi said.

Li Xiaoxia, director of the legal committee on education and juvenile protection of the Nanjing bar association in Jiangsu province, said that juveniles involved in crime are a special group, considering they may have mental, growth and cognitive deficiencies, and procuratorial organs are usually urged to be lenient if they commit minor crimes.

READ MORE: Prosecutors to focus on rights of kids

"In general, juvenile delinquency has its roots in family, social and environmental reasons," she said.

"When helping young offenders, we need to understand their growth situations and social experiences and help them with behavior correction and counseling."

To prevent crimes against minors, Li suggested parents, schools and communities work together to participate in children's education and growth.

She also called for more opportunities for children to integrate into society, communicate with their peers and improve their sense of responsibility and self-protection.