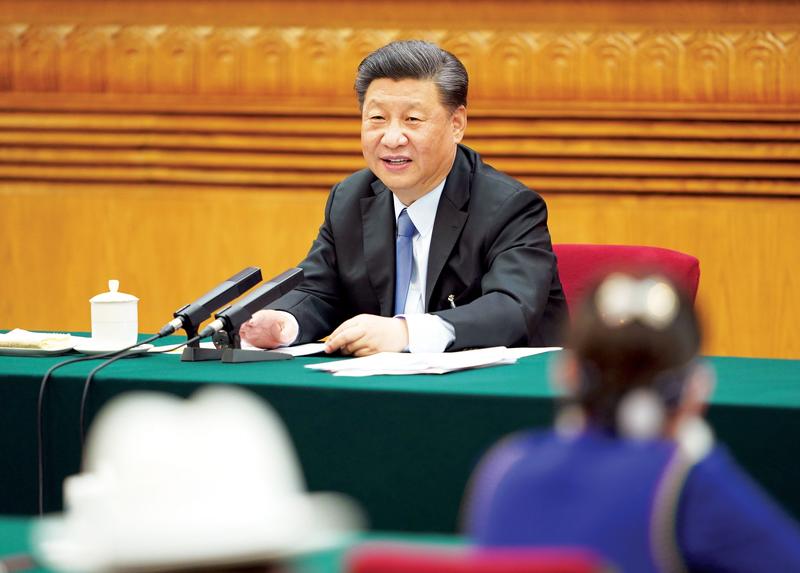 President Xi Jinping takes part in the Inner Mongolia autonomous region delegation’s discussion of the Government Work Report during the third session of the 13th National People’s Congress in Beijing on May 22. (LI GANG / XINHUA)

Yu Cheng, a deputy of the National People’s Congress from Hubei province, was a participant in delegation panel discussions attended by President Xi Jinping on May 24, during which she and fellow deputies talked about the people’s war on the novel coronavirus outbreak in what was the hardest-hit region in China.

“We all feel that our country puts people’s life, health and safety as the top priority in the face of the unprecedented epidemic,” Yu said.

She added that the country’s epidemic response is a reflection of the governing philosophy of the Communist Party of China, which was highlighted by Xi, who is also general secretary of the CPC Central Committee, as “putting people first”.

While joining discussions with the NPC deputies from Hubei province, Xi showed his great care about issues that matter to people’s livelihoods in the epidemic-stricken province, such as employment, schooling, social welfare, poverty relief and the legitimate concerns of people who have suffered great losses due to the epidemic.

While taking part in a deliberation with NPC deputies from the delegation of the Inner Mongolia autonomous region on May 22, Xi particularly stressed adhering to “people first” in coordinating epidemic control and economic and social development.

He mentioned a story told by another NPC deputy from Hubei province, Luo Jie — president of Taihe Hospital in the city of Shiyan — who told reporters how medical workers in his hospital spent 47 days saving an 87-year-old COVID-19 patient.

“About 10 medical workers meticulously took care of the patient for dozens of days, and finally saved the patient’s life,” Xi said. “I am really impressed.”

Amid the spread of COVID-19, the CPC has, from the very beginning, stated clearly that people’s lives and health are the top priority.

“We mobilized from around the nation the best doctors, the most advanced equipment and the most needed resources to Hubei and Wuhan, going all out to save lives,” Xi said during the deliberations, adding that the oldest patient to be successfully treated is 108.

“We are willing to save lives at all costs. No matter how old the patients are and how serious their conditions have become, we never give up,” he said.

Wu Fan, a member of the National Committee of the Chinese People’s Political Consultative Conference, the nation’s top political advisory body, said that as a disease prevention and control professional, she witnessed the country’s all-out efforts to mobilize all available resources to save lives.

When delivering this year’s Government Work Report to the NPC session, Premier Li Keqiang said China’s economy posted negative growth in the first quarter of this year, but that was “a price worth paying” to contain COVID-19, since life is invaluable.

He added that “it is only by overcoming enormous difficulties that China has been able to contain COVID-19 in such a short time while also ensuring our people’s basic needs”.

He said the ultimate goal for advancing socioeconomic development is to meet people’s increasing needs for a better life.

Huo Zhaoliang, an NPC deputy and also governor of the autonomous region’s Xilin Gol League, said Xi always bears in mind people’s livelihoods, and he added that he will faithfully carry out Xi’s requirements in his future work and lead the people to have a better life.

The Party’s long-term governance rests on always maintaining a close bond with the people, Xi told the NPC deputies, and “we must always remain true to our aspiration and work in concert with the people through thick and thin”.