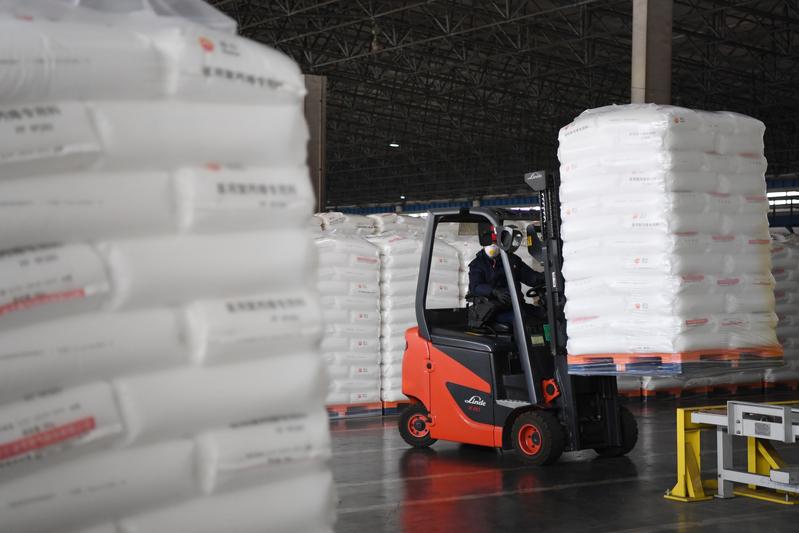 In this Feb 12, 2020 photo, an employee transfers polypropylene material for medical use with a forklift at Lanzhou Petrochemical Company in Lanzhou, northwest China's Gansu Province. (CHEN BIN / XINHUA)

NEW YORK – China's economy is expected to rebound in the second quarter following the country's effective efforts to contain the novel coronavirus, a J.P. Morgan economist has said.

"We do believe that China was very aggressive and successful in containing the crisis," said Bruce Kasman, chief economist and head of global economic research at J.P. Morgan, adding that the world's second largest economy "should rebound this quarter."

China "has done a good job in putting itself in a position for being the first out in terms of generating recovery," Kasman said earlier this week at an event themed on global economic outlook sponsored by the New York Foreign Press Center.

"It's been impressive here so far how well they have gotten that initial step towards stronger activity," he said.

Meanwhile, the economist said challenges remain for China's economic recovery, including an external drag from the rest of the world, given that other economies are "both being weak in the second quarter and not having a full recovery beyond that."

Analysts at J.P. Morgan forecast the global economy will suffer a deep downturn in the first half of the year as the COVID-19 pandemic engulfed the world, followed by a quick, very strong yet partial recovery, said Kasman.

He warned that lingering virus-tied restrictions, big income losses and policy fatigue are likely to have lasting impact on the global economy.