Thailand had no foreign tourists in April after closing borders 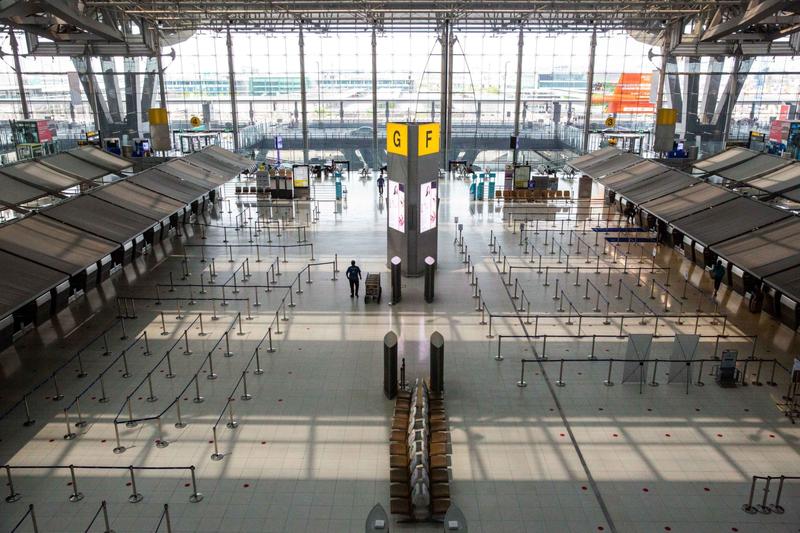 Airport staff walk through an empty Suvarnabhumi Airport departure hall after Thailand's government announced that the country would be suspending all international arrivals on April 3, 2020 in Bangkok, Thailand. (PHOTO / BLOOMBERG)

Thailand received no foreign tourists or related spending in April after closing its borders and banning most incoming international flights to fight the novel coronavirus outbreak.

Tourism accounted for about a fifth of gross domestic product before the pandemic, as holidaymakers flocked to sample azure waters, sandy beaches, gastronomic delights and Bangkok’s sometimes infamous nightlife

Visitors stranded in the country because of lockdowns around the world weren’t counted in the numbers, the Tourism Ministry noted in data released Friday in Bangkok. There were almost 3.2 million arrivals in the same month last year, generating receipts of 146 billion baht (US$4.6 billion).

The latest report is the first to slump to zero in data compiled by Bloomberg stretching back to the 1990s. Incoming international flights are banned through June 30 and it remains unclear whether visitors will be willing or able to rush back when curbs are lifted.

Tourism accounted for about a fifth of gross domestic product before the pandemic, as holidaymakers flocked to sample azure waters, sandy beaches, gastronomic delights and Bangkok’s sometimes infamous nightlife. Chinese visitors were the biggest source of foreign receipts.

The crash in the industry is one reason why the economy is now on course for its worst contraction in about two decades.

The nation remains under a state of emergency but is loosening a partial lockdown in stages to kickstart its economy after virus cases dwindled. Some provinces have allowed hotels to open their doors again, though domestic tourism is sputtering because of COVID-19 restrictions.