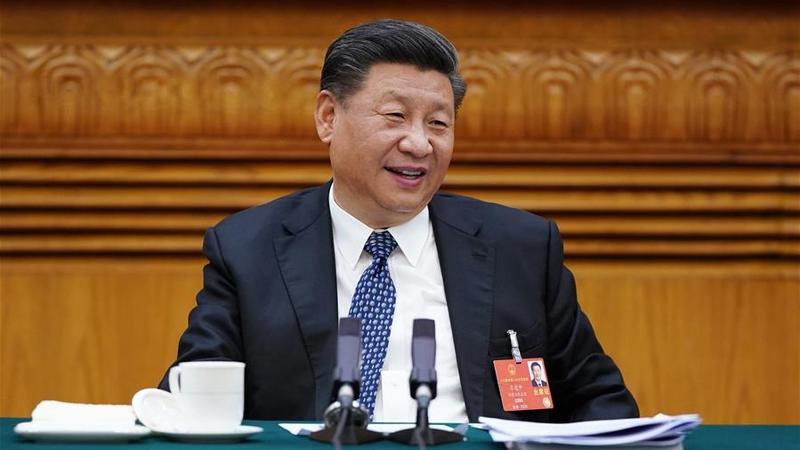 Chinese President Xi Jinping, also general secretary of the Communist Party of China Central Committee and chairman of the Central Military Commission, participates in a discussion with National People's Congress deputies from Hubei province. In Beijing, on May 24, 2020 (PHOTO / XINHUA)

Yu Cheng, a deputy to the 13th National People's Congress from Hubei province, was a participant in a deliberation attended by President Xi Jinping on Sunday. She and her fellow deputies from the province talked about the people's war on the novel coronavirus in what was the hardest-hit region in China.

"We all feel that our country has made people's lives, health and safety the top priority in the face of an unprecedented epidemic," she said.

Yu, who works at Wuhan Second Light Industry School, volunteered to help community workers in a neighborhood in Wuhan, Hubei's capital, to combat the contagion after the epidemic struck the city.

She called the country's epidemic response a reflection of the governing philosophy of the Communist Party of China, which was highlighted by Xi, who is also general secretary of the CPC Central Committee, as "putting people first".

We all feel that our country has made people's lives, health and safety the top priority in the face of an unprecedented epidemic.

Yu Cheng, a deputy to the 13th National People's Congres from Hubei, China

While joining discussions with the NPC deputies from Hubei, Xi showed his great concern for issues that matter to people's livelihoods in the epidemic-stricken province, such as employment, schooling, social welfare, poverty relief and the legitimate concerns of people who have suffered great losses due to the epidemic.

"People" has become a key word in Xi's everyday work since he became general secretary of the CPC Central Committee in 2012. He said on various occasions that "the people's desire for a better life is the goal we strive to realize".

While taking part in a deliberation with NPC deputies from the delegation of the Inner Mongolia autonomous region on Friday, Xi particularly stressed adhering to "people first" in coordinating epidemic control and economic and social development.

Xi mentioned a story told by another NPC deputy from Hubei, Luo Jie－president of Taihe Hospital in the city of Shiyan－who told reporters how medical workers in his hospital spent 47 days saving an 87-year-old COVID-19 patient.

"About 10 medical workers meticulously took care of the patient for dozens of days, and finally saved the patient's life," he said. "I am really impressed."

Amid the spread of COVID-19, the CPC has, from the very beginning, stated clearly that people's lives and health are the top priority.

"We mobilized from around the nation the best doctors, the most advanced equipment and the most needed resources to send to Hubei and Wuhan, going all out to save lives," Xi said during the deliberations, adding that the oldest patient to be successfully treated is 108.

"We are willing to save lives at all costs. No matter how old the patients are and how serious their conditions have become, we never give up," he said.

In Hubei alone, more than 3,600 COVID-19 patients over the age of 80 have recovered thanks to medical care. In Wuhan, seven centenarian patients have recovered.

Wu Fan, a member of the 13th National Committee of the Chinese People's Political Consultative Conference, the nation's top political advisory body, said that as a disease prevention and control professional, she witnessed the country's all-out efforts to mobilize all available resources to save lives.

Amid the spread of COVID-19, the CPC has, from the very beginning, stated clearly that people's lives and health are the top priority

The CPC's "people-first" philosophy is reflected in the nation's emphasis on improving admission and recovery rates and reducing the infection and mortality rates to the maximum extent, Wu said.

While delivering this year's Government Work Report to the ongoing NPC session, Premier Li Keqiang said China's economy posted negative growth in the first quarter of this year, but that was "a price worth paying" to contain COVID-19, since life is invaluable.

"It is only by overcoming enormous difficulties that China has been able to contain COVID-19 in such a short time while also ensuring our people's basic needs," Li said.

He said the ultimate goal for advancing socioeconomic development is to meet people's increasing needs for a better life.

Xi, while talking to NPC deputies from Inner Mongolia, said the ultimate goal for advancing socioeconomic development is to meet people's increasing needs for a better life

Xi urged Party and government officials to have a correct perspective on political achievements and prudently exercise the power that people grant to them. He called for firm efforts to combat corruption and oppose the practice of formalism and bureaucracy.

The Party's long-term governance rests on always maintaining a close bond with the people, Xi told the NPC deputies, and "we must always remain true to our aspiration and work in concert with the people through thick and thin".

Experts said that understanding the CPC's people-centered philosophy holds the key to knowing Chinese politics as well as the core value of the Party in governing the world's most populous country.

It is the original aspiration and mission of the CPC to take people's pursuit of a better life as its greatest value and to translate the country's development results into people's sense of fulfillment, happiness and security, Xin Ming, a professor at the Party School of the CPC Central Committee, said in an article published by the Study Times newspaper on May 22.

Sticking to a people-centered development philosophy reflects the prominent strength of China's political system and is also a marked advantage of the nation's governing system and capacity, Xin said.

Huo Zhaoliang, an NPC deputy and head of Xilingol League in the Inner Mongolia autonomous region, said Xi always bears in mind people's livelihoods, and he added that he will faithfully carry out Xi's requirements in his work and lead the people to secure a better life.

Song Huaying, a CPPCC member and also deputy secretary of the CPC Xingtai city committee in Hebei province, said she will strive to turn the aspiration of serving the people into concrete action, and lead the local people to advance efforts in poverty reduction and rural vitalization to secure the goal of eliminating absolute poverty.

All rural poor will bid farewell to poverty this year as part of the nation's goal of building a moderately prosperous society in all respects.