Locust swarms head for India ahead of planting season 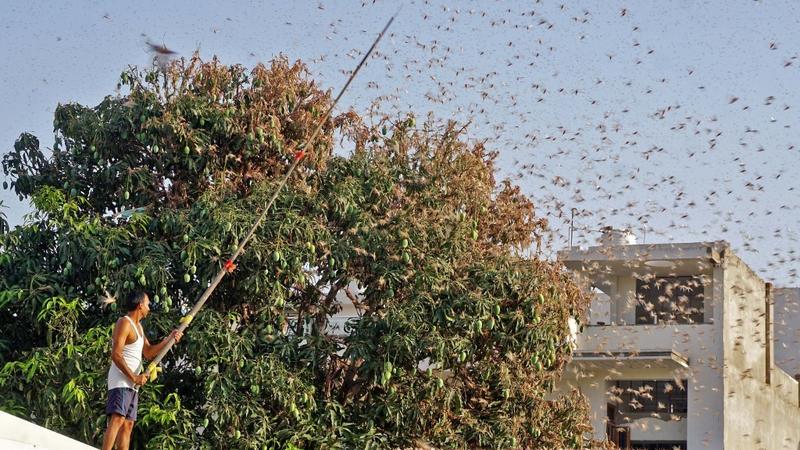 In this photograph taken on May 25, 2020 a resident tries to fend off swarms of locusts from a mango tree in a residential area of Jaipur in the Indian state of Rajasthan. (VISHAL BHATNAGAR / AFP)

Indian authorities are helping farmers mount a pesticide spraying campaign to fight the swarms of desert locusts which have already devastated crops across Pakistan and East Africa.

As many as 700 tractors, 75 fire engines and almost 50 other vehicles are engaged in spraying pesticides to kill the locusts, Trilochan Mohapatra, director general of the state-run Indian Council of Agricultural Research in New Delhi said on Tuesday. Drones will also be employed.

At this point it’s manageable, but if it continues it will be a problem

“At this point it’s manageable, but if it continues it will be a problem” for monsoon-sown crops, said Mohapatra, who’s also the top bureaucrat at the department of agricultural research and education. The impact will be lessened by the current spraying campaign and the fact that the harvest of the winter crop is mostly over, he said.

About 42,000 hectares (104,000 acres) of cotton, summer pulses and vegetable crops have been affected by locusts across six states, mainly in Rajasthan, said Mohapatra. Farmers grow rice, pulses, cotton, sugar cane and soybeans on over 106 million hectares in the monsoon season, according to the farm ministry.

Swarms of desert locusts occur irregularly in North Africa, the Middle East and South Asia, usually when drought is followed by heavy rain. Normally, with the arrival of the monsoon, locust swarms enter the desert areas of India via Pakistan for breeding in June-July, but this year pink adult swarms were reported as early as April 30 in Rajasthan and Punjab, the farm ministry said. 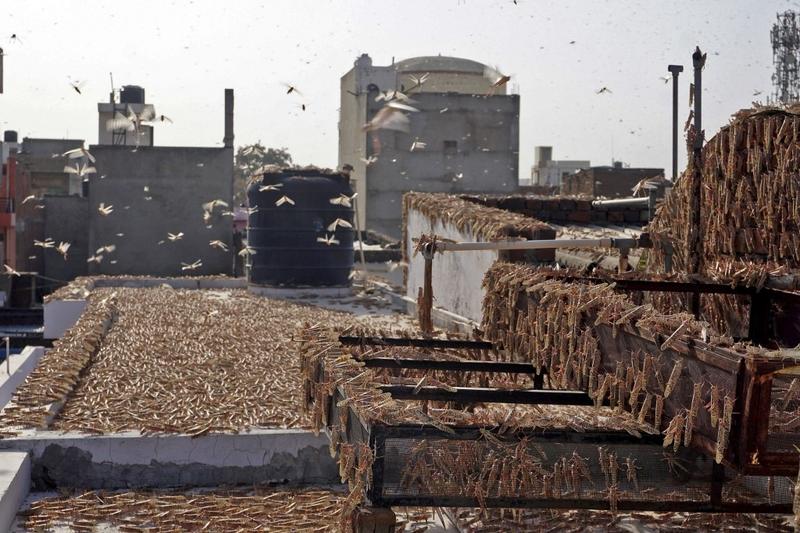 In this photograph taken on May 25, 2020 swarms of locusts are seen atop a residential building in Jaipur in the Indian state of Rajasthan. (VISHAL BHATNAGAR / AFP)

This is in part because of the uncontrolled swarms in Pakistan that breed continuously, the ministry said earlier. Swarms of pink immature adults fly high and travel long distances with strong winds coming from Pakistan. Most of them settle on trees during the night and mostly fly during the day, it said.

The hoppers and pink swarms have been controlled in 14,299 hectares in some areas of Rajasthan and Punjab as of May 11, according to the farm ministry.

In January, the biggest locust swarm to hit India’s Gujarat in over a quarter of a century resulted in more than 25,000 hectares of wheat, rapeseed, cumin and potatoes being attacked, with at least a third of the crops damaged in 75 percent of the affected areas, according to the state’s directorate of agriculture.

Overall, growth in India’s agriculture sector will likely be positive in the fiscal year that began on April 1, said Ashok Gulati, a professor at the Indian Council for Research on International Economic Relations in New Delhi. “It will have some impact on horticulture crops, but not much,” he said.

India’s massive locust attack 2019-20 saw about 403,488 hectares treated with pesticides, according to the farm ministry.