Authorities call for Pakistan, China to unite on locust swarm 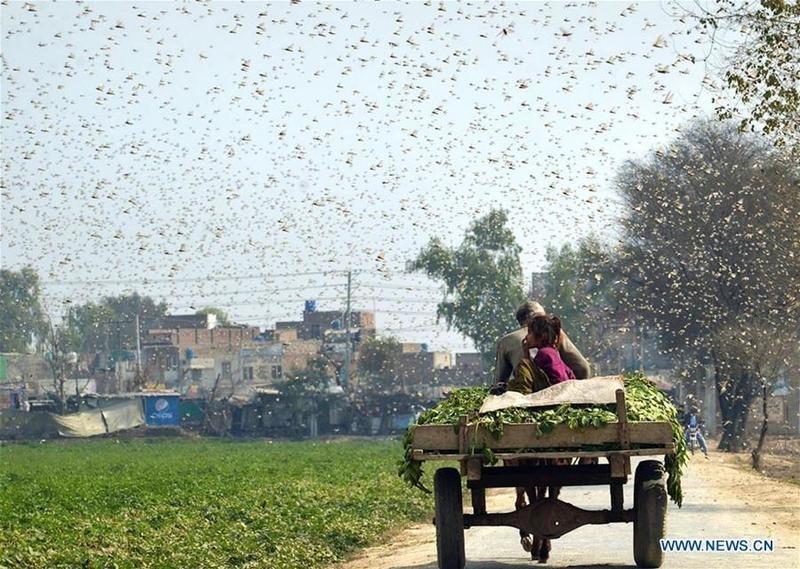 This photo taken on Feb 15, 2020 shows a farmer riding a cart as locusts swarm in the Okara district in eastern Pakistan's Punjab province. (PHOTO / STR / XINHUA)

The agricultural authority is calling for a cooperative mechanism between China and Pakistan to enhance communication on desert locust control to prevent the current plague from worsening in Pakistan while reducing the threat to China.

an expert from the Ministry of Agriculture and Rural Affairs

"The desert locust situation is critical in Pakistan as most of the swarms are now in the mating season and their eggs will pose a great threat to crops in autumn after they hatch," according to an expert from the Ministry of Agriculture and Rural Affairs.

"China and Pakistan should build a mechanism as part of the two country's agricultural cooperation and organize a regular conference to boost information exchanges and encourage more technology training," said Wang Fengle, leader of a Chinese team of experts that traveled to Pakistan in February.

As part of cooperation efforts, Wang said, China and Pakistan should establish a monitoring system on the desert locust migration and conduct research on its biocharacteristics.

Also, he said the countries will build a pest control laboratory to develop new technologies for pest control and prevention.

"Moreover, China will further assist Pakistan in building factories for the production of pesticides and spraying equipment," Wang said. "Training bases for relative personnel will also be built."

The locust swarm invaded Pakistan in March last year and has grown to threatening proportions since November, when the Food and Agriculture Organization issued a warning that the swarm had started to leave its reproducing grounds in the Cholistan Desert to the eastern Pakistani district of Tharparkar.

In early February, Pakistani authorities declared a national emergency to battle the swarms of desert locusts that are eating crops on a large scale and raising fears of food insecurity.

According to Pakistan's food security department, about 38 percent of the country's 30 million hectares of land has been invaded by the locust, which initially came from East Africa, West Asia and the area around the Red Sea.

"Surveillance of the locust eggs hatching is crucial," Wang said. "To use pesticides before the locust has gained the ability to fly will effectively control its future threats to the crops."

According to the ministry, it is very unlikely that desert locusts will directly migrate into China's inland areas due to differences in climate and geographic conditions.

There are two main migrating routes for desert locusts entering China from bordering countries. One is from Pakistan and Nepal to the Xinjiang Uygur autonomous region and Tibet, while another is from Myanmar to Yunnan province.

"The barrier of the Qinghai-Tibet Plateau blocks the first route, and the climate there, as well as the rainforest in Yunnan, is not suitable for the desert locust," said Zhang Zehua, a researcher at the Institute of Plant Protection of the Chinese Academy of Agricultural Sciences.

Earlier this month, the National Forestry and Grassland Administration released a notice calling for cross-regional communication and cooperation on desert locust prevention and control.

Though there is a lower risk of a massive locust plague coming to China, the administration noted that the country may face some uncertainties regarding control efforts. It urged all related departments to treat possible threats seriously.

The desert locust is the most destructive migratory pest in the world. They are ravenous eaters that consume their own weight in crops every day, according to the FAO.

Just a single square kilometer of a swarm can contain up to 80 million adults, with the capacity to consume the same amount of food in one day as 35,000 people. Large swarms pose a major threat to food security and rural livelihoods.