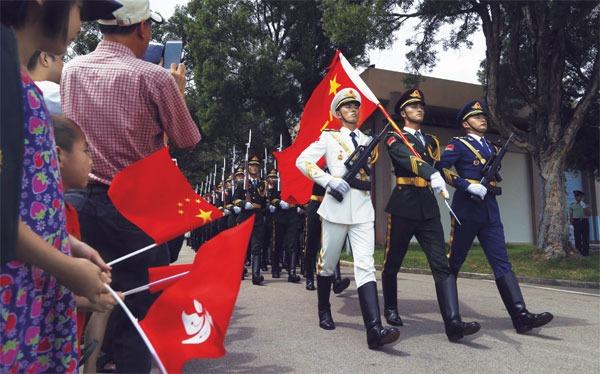 Soldiers from the People's Liberation Army Hong Kong Garrison march while visitors look on during the open day of the garrison to celebrate the 19th anniversary of the Hong Kong Special Administrative Region at the barracks in July 2018. (ROY LIU / CHINA DAILY)

The garrison's troops will uphold the principle of "one country, two systems" and complete missions given by the Communist Party of China and the Chinese people, Major General Chen Daoxiang said

Chen, also a deputy to the 13th National People's Congress, the top legislature, was quoted by China National Radio as saying in a report published on Tuesday that the PLA Hong Kong Garrison is a major force in protecting the national security in the special administrative region and it strongly supports the draft decision proposed by the Standing Committee of the 13th NPC concerning measures on national security in Hong Kong.

"This decision will help to curb and punish any attempt to jeopardize the national unity, deter separatists and foreign interference, and show our unwavering resolution of safeguarding the national sovereignty and territorial integrity," the officer said.

A draft decision on establishing and improving the legal system and enforcement mechanisms for the Hong Kong Special Administrative Region to safeguard national security was submitted to the NPC for deliberation at the third plenary session of 13th NPC.

The garrison's troops will uphold the principle of "one country, two systems" and complete missions given by the Communist Party of China and the Chinese people, Chen said.

"We have the determination, confidence and capability to protect our national sovereignty, security and development interests, as well as the long-term prosperity and stability of Hong Kong," he said.