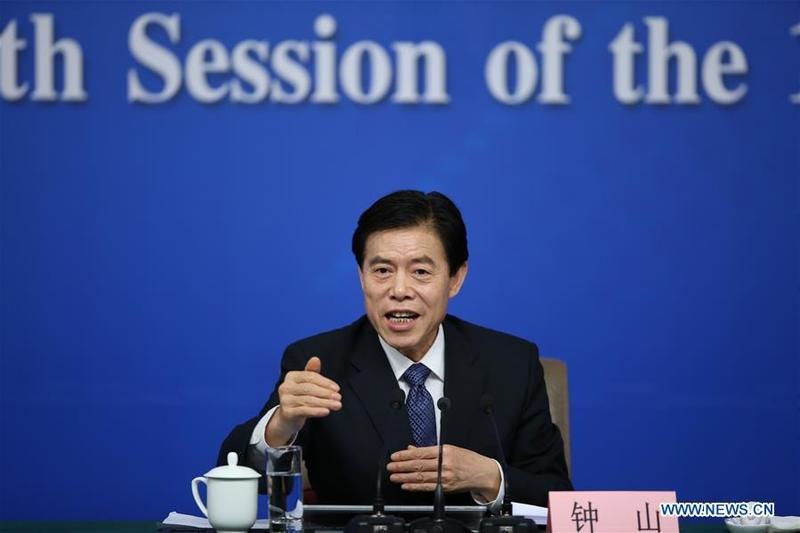 Chinese Minister of Commerce Zhong Shan answers questions at a press conference on structural adjustments and innovation for the fifth session of the 12th National People's Congress in Beijing, capital of China, March 11, 2017. (JIN LIWANG / XINHUA)

BEIJING - China will beef up efforts to maintain stable foreign trade and investment as the COVID-19 pandemic has dealt a heavy blow to the world economy, a minister said Monday.

The country will work to energize foreign trade entities and further improve its business environment, Minister of Commerce Zhong Shan told a press conference on the sidelines of the annual national legislative session.

To ensure stable foreign trade, China will expand its opening up with efforts including easing market access and shortening the negative list for foreign investment, he said.

China has been prudent and restrained in taking trade remedy measures, China's commerce minister said, while pointing out that anti-dumping and anti-subsidy investigations into Australian barley had been conducted in accordance with Chinese laws and World Trade Organization rules

China has been prudent and restrained in taking trade remedy measures, Zhong said Monday on the sidelines of the annual national legislative session.

He made the remarks when answering a question regarding China's anti-dumping and anti-subsidy measures on Australian barley.

The anti-dumping and anti-subsidy investigations into Australian barley, conducted in accordance with Chinese laws and World Trade Organization (WTO) rules, were launched at the end of 2018, and the decision to impose duties was made on May 18, Zhong said.

"During the investigations, we guaranteed rights of both sides, and listened to opinions from stakeholders," he said, adding that the probe confirmed the dumping and subsidizing by Australia, which incurred substantial damage on China's domestic industry.

Zhong said the barley case was the only one trade remedy probe launched by China against Australia since diplomatic relations had been established, while Australia had initiated 100 investigations against China.

Since the beginning of this year, China has not initiated any trade remedy investigation against any country, while Australia has launched three probes against China, the minister said.

He called on WTO members to use trade remedy measures with caution amid joint efforts in fighting the COVID-19 pandemic.Comm