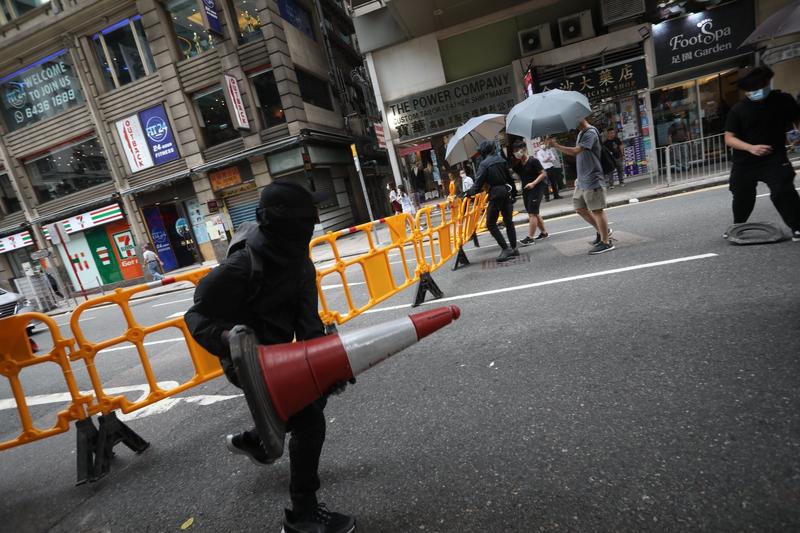 A black-clad protester carries a traffic cone as other protesters set up a road barricade with metal railings during an illegal assembly in Causeway Bay, Hong Kong, May 24, 2020. (PHOTO/CHINA DAILY)

The unlawful assemblies as well as the very violent and illegal acts are extremely irresponsible, as they did not only affect the commercial activities nearby, they might also increase the risk of the spread of the virus.

The spokesman said the rioters took part in unlawful assemblies and engaged in violent and illegal acts in the vicinity of Causeway Bay and Wan Chai, where they blocked roads with miscellaneous objects, set fires, vandalized shops and public facilities, from dismantling railings, trashing traffic lights to prying up drainage covers and bricks and assaulting people with different views.

While some rioters invaded into a flyover to disrupt the traffic, some even threw glass bottles from the rooftop of buildings and assaulted police officers with bricks and splashed them with unknown liquid, injuring at least four officers who had to be sent to hospital.

“These violent acts pose a serious threat to public safety and are outrageous,” the spokesman said, adding that the police are duty-bound to use appropriate force to conduct dispersal and arrest operations.

Since June last year, rioters have launched activities to breach the public peace for months on end on the pretext of protesting against the legislative exercise of the Fugitive Offenders Bill, bringing about tremendous harm to Hong Kong. Although the violent and illegal acts subsided amid the epidemic earlier, the rioters have all along been eyeing opportunities to act. As the epidemic eases, the rioters, once again, on the pretext of opposing the legislation on national security.

The National People's Congress will deliberate the draft decision on establishing and improving the legal system and enforcement mechanisms for the HKSAR to safeguard national security. The fundamental objective of the decision is to safeguard national security and the prosperity and stability of Hong Kong, thereby better protecting the legitimate rights and freedoms of all members of the public in Hong Kong.

“The violent acts in Causeway Bay and Wan Chai today show that advocates of "Hong Kong independence" and rioters remain rampant, reinforcing the need and urgency of the legislation on national security,” the spokesman stressed.

The spokesman added that given that the epidemic has not been over, the restrictions on group gatherings in public places are still in effect to safeguard public health and that Hong Kong, whose economic situation has been severe amid the epidemic, cannot withstand further blows.

The unlawful assemblies as well as the very violent and illegal acts are extremely irresponsible, as they did not only affect the commercial activities nearby, they might also increase the risk of the spread of the virus.

“The HKSAR government urges members of the public to dissociate themselves from the rioters and abide by the law, and the majority of residents who treasure Hong Kong should also condemn these violent acts together,” the spokesman said.