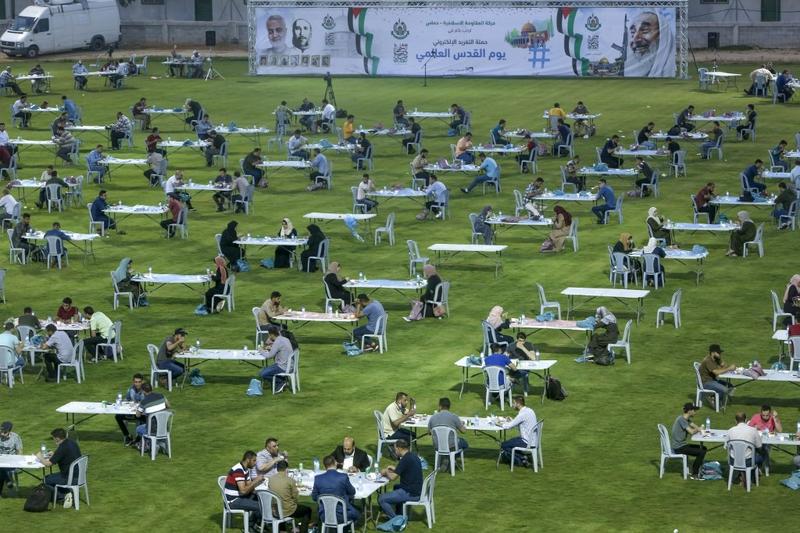 Palestinians break their Ramadan fast during an Iftar meal set-up to respect social distancing measures amid the COVID-19 pandemic, organized by the Islamic Hamas movement which runs the besieged Gaza Strip, at the Palestine football stadium in Gaza city on May 21, 2020. (MOHAMMED ABED / AFP)

Singapore's Ministry of Health reported 642 new COVID-19 cases on Saturday, bringing the total confirmed cases in the country to 31,068

Blockaded and short on medical facilities, Gaza, run by the Islamist group Hamas, has reported only 55 coronavirus infection cases among its population of two million. Meanwhile, in the Israeli occupied West Bank, where Palestinians have limited self-rule, there have been two deaths and 423 cases.

The Gaza health ministry described the fatality as a 77-year-old woman who had entered via the Egyptian border on May 19 and had been kept in quarantine since. She suffered from a prior chronic illness, the ministry said.

Hamas, which has run Gaza since 2007, has closed crossings with Egypt and Israel except for essential traffic, but unlike in the West Bank it said a full lockdown was not yet needed.

Afghanistan Public Health Ministry has confirmed 782 new cases of COVID-19 over the past 24 hours, bringing the total number of cases to 9,998 in the country, spokesman for the ministry Tawhid Shakohmand said Saturday.

According to the official, eight patients died over the past 24 hours, bringing the death toll to 216 since the outbreak of the virus in Afghanistan in February.

A total of 1,040 patients, including 44 in the past 24 hours, have recovered, the official added.

Australia’s Victoria state will reopen galleries and museums and allow bigger outdoor gatherings in a week as the rate of new coronavirus infections remains flat.

Skate parks, outdoor gyms and playgrounds will reopen from Tuesday, while as many as 20 people will be allowed to gather inside a home or outside from just before midnight on May 31, Premier Daniel Andrews said Sunday.

If community transmission rates remain low, there will be a further easing of restrictions from June 22, including allowing as many as 50 people inside cafes, restaurants, and for the first time, cinemas and theaters. People should continue to work from home until at least the end of June, Andrews said. 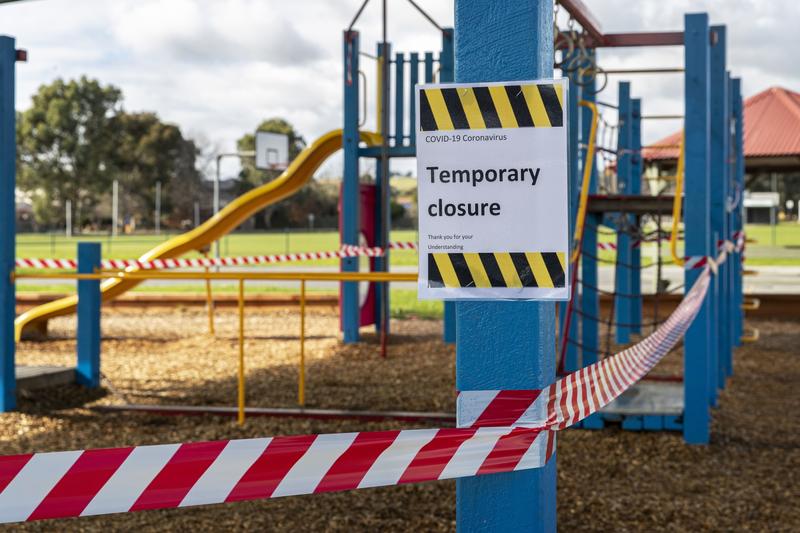 Closed school playground areas are seen ahead of opening next week at Lysterfield Primary School on May 22, 2020 in Melbourne, Australia. (DANIEL POCKETT / GETTY IMAGES VIA BLOOMBERG)

India's federal health ministry Sunday morning said 147 new deaths due to COVID-19, besides fresh 6,767 positive cases were reported since Saturday in the country, taking the number of deaths to 3,867 and total cases to 131,868.

This is the highest one day spike in COVID-19 cases so far in the country, showed the data.

“As on 8:00 am (local time) Sunday, 3,867 deaths related to novel Coronavirus have been recorded in the country," reads information released by the ministry.

According to ministry officials, so far 54,441 people have been discharged from hospitals after showing improvement.

"The number of active cases in the country right now is 73,560," reads the information.

Sunday marks the 61st straight day of ongoing Lockdown across the country announced by the Centre Government to contain the spread of the pandemic.

The Lockdown, announced on March 25, was again extended last week till May 31. The fourth phase began from Monday. 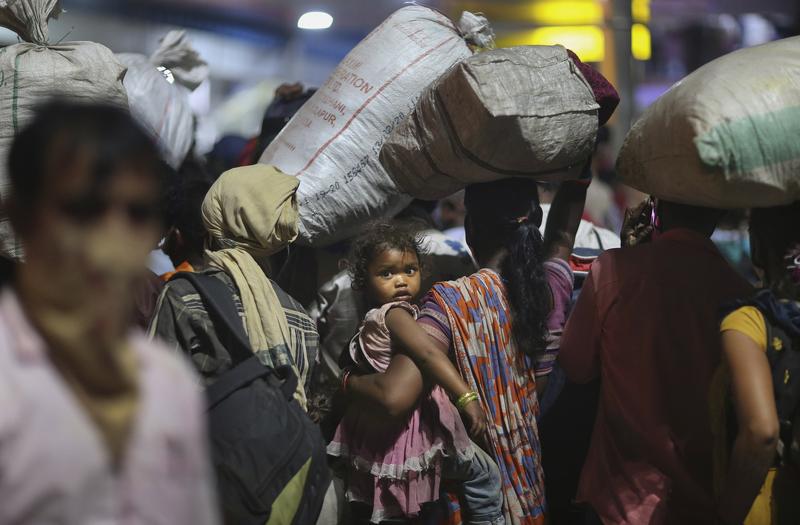 Migrant workers line up to board trains to their home states as others sleep, at Hyderabad Railway Station in Hyderabad, India, May 23, 2020. (MAHESH KUMAR A / AP)

The Iraqi Health Ministry on Saturday said that the daily increase of COVID-19 cases in the country jumped to 308, the highest record so far, bringing the total number of infections to 4,272.

The new cases included 274 in the capital Baghdad, seven in Sulaimaniyah, six each in Basra and Wasit, five in Muthanna, three each in Diyala and Karbala and one each in Erbil, Duhok, Najaf and Salahudin, the statement added.

Five more people died during the day in Baghdad's hospitals, bringing the death toll in the country to 152, while 2,585 have recovered so far.

The new cases were recorded after 6,352 test kits were used across the country during the past 24 hours, and a total of 182,182 tests have been carried out since the outbreak of the disease, according to the statement.

Japan’s government has decided to lift the state of emergency in Tokyo, its surrounding regions and the northern island of Hokkaido as new virus cases tail off, public broadcaster NHK reported.

The government will put the issue to a meeting of a panel of advisers on Monday, NHK reported, with the move set to bring the state of emergency in the country to an end a week ahead of schedule.

Tokyo reported 14 new coronavirus cases Sunday, the highest since May 16, after just two cases were confirmed on Saturday. The total for the past seven days is 50, below the threshold of 70, or 0.5 people per 100,000, which the government has outlined as being needed to lift the emergency.

“The number of infections is decreasing day by day. That can be seen even in areas where the state of emergency is still in effect,” Health Minister Katsunobu Kato said Sunday morning on NHK. “The situation of the outbreak is improving, and the pressure on the medical system is being relieved.”

The number of fatalities remained unchanged at 115, it said.

With the single day spike of 68 new cases, the number of COVID-19 cases in Nepal had reached 584, the Nepali Ministry of Health and Population said Saturday.

Nepal has been witnessing a rapid rise in the cases of the COVID-19 in recent days. On Friday, the number of cases in Nepal crossed 500 mark and it was close to 600 on Saturday.

"COVID-19 cases in the country have reached 584," said Bikas Devkota, spokesperson at the Ministry Health and Population, said in a regular press briefing.

"Tracing of those who had come into contact with the newly infected people is underway," the spokesperson said.

Nepal has so far reported three deaths from the COVID-19.

As the number of COVID-19 cases keeps rising, the Nepali government has extended the nationwide lockdown till June 2, suspending ground and air transports and shutting down most of the businesses and industries except medical, food and construction related industries.

The Philippines’ tally of coronavirus cases surpassed 14,000 on Sunday and the number of fatalities rose to 868, the health ministry said.

Singapore’s health ministry said on Sunday it had confirmed 548 more coronavirus cases, taking its tally of infections to 31,616.

The vast majority of the newly infected people are migrant workers living in dormitories, the ministry said in a statement. Three are permanent residents.

Eleven new COVID-19 cases were reported in Syria on Saturday, bringing the overall number of infections in Syria to 70, the Health Ministry said in a statement.

The ministry said there are 29 active cases in Syria, 24 of which came from outside the country.

It said the overall number of cases includes 37 recoveries and four deaths.

All the new cases were from Syrians who were brought recently from Kuwait as part of the Syrian government efforts to bring back Syrians stranded abroad due to the coronavirus crisis, it added.

The Syrian government has recently eased the measures undertaken against the spread of the COVID-19 virus, but kept a partial curfew in place while urging civilians to take precautions and maintain social distancing.

Passengers wearing facemasks ride the city commuter train as they sit on seats marked for social distancing as a preventive measure against the spread of the COVID-19 coronavirus in Bangkok on May 23, 2020. (Romeo GACAD / AFP)

Thailand on Sunday reported no new coronavirus cases and no new deaths, maintaining the total to 3,040 confirmed cases and 56 fatalities since the outbreak began in January.

Sunday was the fourth day in this month that there were no new daily cases, said Panprapa Yongtrakul, a spokeswoman for the government’s coronavirus task force.

There are 2,921 patients who have recovered and returned home since the outbreak started.

Thailand on Saturday began testing a vaccine against the coronavirus on monkeys after positive trials in mice, an official said.

Thailand’s minister of higher education, science, and research and innovation, Suvit Maesincee, said researchers had moved testing of the vaccine to monkeys and hoped to have a “clearer outcome” of its effectiveness by September.

Thailand announced on Wednesday that it was developing a vaccine - one of at least 100 potential vaccines in the works worldwide - and hoped to have it into production by next year.

The Thai vaccine uses messenger RNA, which prompts body cells to produce antigens, molecules on the surface of viruses, that spur the immune system into action.

Vietnam reported no new COVID-19 cases for the fifth consecutive day on Saturday, and no local transmission of COVID-19 for 37 straight days, with its total confirmed cases remaining at 324, according to its Ministry of Health.

There are over 14,700 people being monitored and quarantined, with no deaths from the disease reported so far.

Meanwhile, as many as 267 patients in the country have totally recovered from the disease, said the ministry.