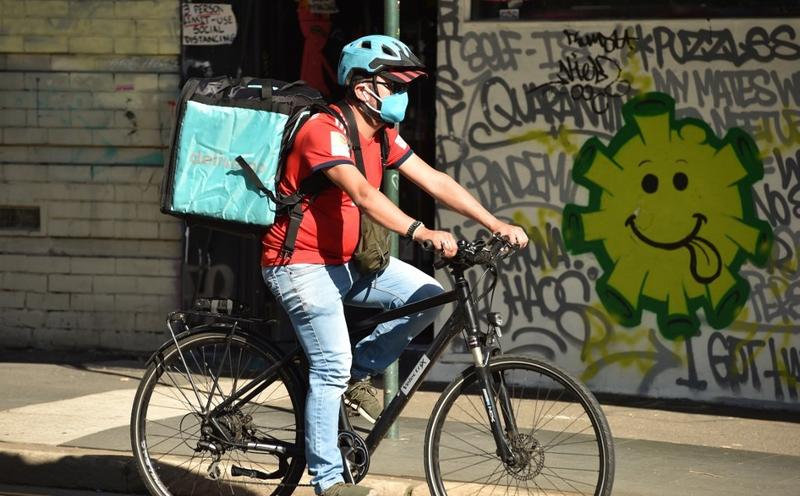 A delivery man cycles past a street art in Sydney on May 8, 2020. Australia's government unveiled a three-stage plan to get the economy back to a new "COVID-safe" normal by the end of July. (PETER PARKS / AFP)

Prime Minister Scott Morrison on Friday outlined plans to remove most curbs by July in a three-step process to get nearly 1 million people back to work, as the country has reined in new COVID-19 infections to less than 20 a day with strict lockdowns.

The nation’s capital, Canberra, and some states, on Saturday allowed people to start visiting each other again, with indoor and outdoor gatherings, including weddings, of up to 10 people allowed.

In South Australia, outdoor dining at restaurants and cafes will be allowed from Monday for up to 10 people, and in the Northern Territory, pubs, bars and restaurants will reopen next Friday.

However the states of New South Wales and Victoria, which make up more than half the country’s population and nearly two-thirds of the country’s COVID-19 cases, plan to outline plans for easing business restrictions only next week.

ALSO READ: Australia, New Zealand work to open borders to each other

New South Wales Health Minister Brad Hazzard said on Saturday nearly 300,000 people have been tested for coronavirus in the state, and while 3,000 of those had tested positive, 82 percent of them were already well again.

Australia and New Zealand Banking Group, Australia’s fourth largest bank, told staff it was preparing for a staged return to work, with no more than 35 percent of its people to be in the office at any one time.

New Zealand reported two new COVID-19 cases on Saturday, taking the country’s total to 1,492 cases. There have been 21 deaths linked to the coronavirus.

The vast majority of the newly infected people are migrant workers living in dormitories, the health ministry said in a statement. Nine are permanent residents. 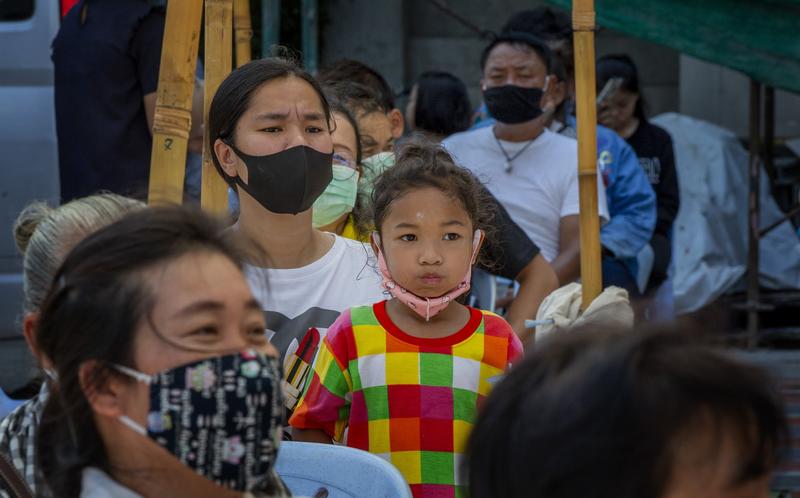 People from the low-income neighborhood of Klong Toey wait to get tested for the coronavirus in Bangkok, Thailand, May 6, 2020. (GEMUNU AMARASINGHE / AP)

Thailand reported four new coronavirus cases and one more death on Saturday, bringing the total to 3,004 cases and 56 deaths since the outbreak started in January.

Of the new cases, two are from the southern province of Yala, where the authorities are aggressively testing people due to high infection rates. One was linked with previous cases and one had a risk history from public places, he said.

Slowing numbers of new cases have prompted Thailand to cautiously allow some businesses to reopen after weeks of semi-lockdown.

Tokyo reported 36 new cases of coronavirus infections on Saturday, TV Asahi said, three less than a day earlier and the seventh consecutive day that new infections have remained below 100.

The latest figures, for which the broadcaster cited unnamed sources, bring total coronavirus infections in Japan’s capital city to 4,846 cases.

Malaysia health authorities on Saturday reported 54 new coronavirus cases for a total of 6,589.

Yurianto reported 16 more have died from the disease, taking the total number of death to 959, while 2,607 have recovered.

Nearly 108,700 people have been tested as of Saturday, he added, while urging Indonesians to continue obeying the stay-at-home order to prevent further spread of the virus.

The Philippines’ health ministry reported on Saturday that coronavirus deaths have reached more than 700.

The country recorded eight new coronavirus deaths, bringing the total to 704, the health ministry said in a bulletin. Infections increased by 147 to 10,610 while 108 patients have recovered, bringing total recoveries to 1,842.

Inbound international chartered flights will be permitted to land at Ninoy Aquino International Airport on Mondays and Thursdays, while commercial ones will be allowed on the other days of the week, the civil aviation authority said in a statement. That schedule will last for a month, until June 10.

The Philippines suspended all commercial passenger flights to and from the country on May 3 because of the coronavirus outbreak, while allowing outbound flights to resume the next day. It cited congested quarantine facilities for Filipino workers returning from overseas as the reason for the suspension.

India's federal health ministry Saturday morning reported 95 more deaths and 3,320 new COVID-19 cases since Friday in the country, taking the number of deaths to 1,981 and total cases to 59,662.

According to ministry officials, 17,847 people have been discharged from hospitals after showing improvement.

"The number of active cases in the country right now is 39,834," read the information.

A new case of coronavirus has been discovered in Yemen’s Sanaa, which was transmitted from Aden, Houthi’s health ministry said in a statement early on Saturday.

This brings the total cases of coronavirus in areas under Houthi’s control to two, including a Somali national who was found dead in a hotel.

Early on Friday, the internationally-recognized government reported nine new coronavirus cases in Aden and two deaths, bringing the total count in areas under control of the government to 34 infections with seven deaths. 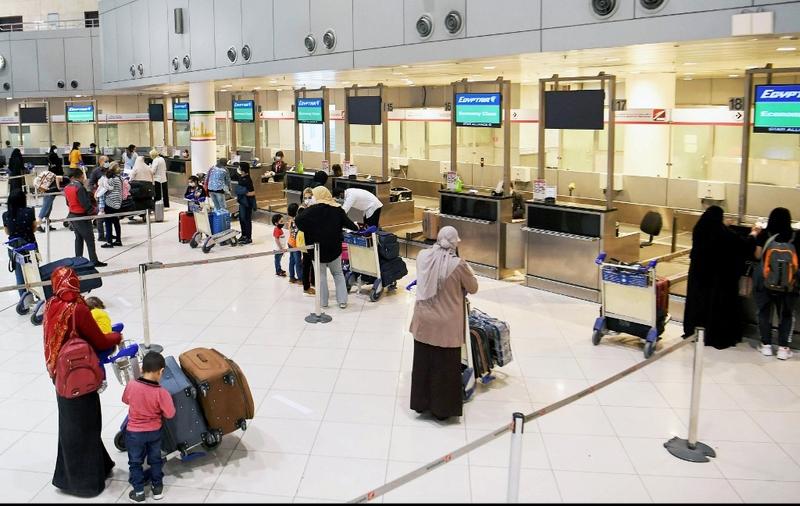 Egyptian citizens queue at Kuwait International Airport before boarding a repatriation flight to Cairo, in Kuwait City on May 5, 2020. (YASSER AL-ZAYYAT / AFP)

Kuwait will enact a “total curfew” from 4pm (1300 GMT) on Sunday through to May 30 to help to curb the spread of the new coronavirus, its cabinet said in a statement on Friday.

During the curfew, public sectors will work remotely and private sector activities, excluding vital ones, will be suspended, the statement said

During the curfew, public sectors will work remotely and private sector activities, excluding vital ones, will be suspended, the statement said. All banks will be closed, but will continue to provide services electronically.

Essential sectors like health, security, electricity, oil and municipal services, as well as private sector companies providing vital services like maintenance will be exempt from the curfew, interior minister Anas al-Saleh said in a televised news conference later on Friday.

Kuwait on April 20 expanded a nationwide curfew to 16 hours a day, from 4pm to 8am, and extended a suspension of work in the public sector, including government ministries, until May 31.

Cooperatives and grocery stores will remain open during the curfew. People will have to book an appointment in advance and one person from each family will be allowed out for shopping.

People will be required to wear protective masks and will be able to go out for walks between 4:30 and 6:30 pm without using any vehicles.

In addition, print newspapers will be suspended and home deliveries will be allowed only for essential food and pharmaceutical supplies.

On Friday the Gulf state announced 641 new coronavirus cases and three deaths, bringing its total number of confirmed cases to 7,208, with 47 deaths.

The number of cases in the six Gulf Arab states has risen steadily to almost 86,000, with 486 deaths, despite containment measures including curfews, the grounding of passenger flights and the closure of most public venues.

The number of coronavirus cases in Saudi Arabia exceeded 35,000 on Friday.

The total number of confirmed cases in the country has climbed to 135,569 while the death toll surged to 3,689, Koca tweeted

The total number of confirmed cases in the country has climbed to 135,569 while the death toll surged to 3,689, Koca tweeted.

In addition, 86,396 patients have recovered from COVID-19, while 1,219 are being treated at intensive care units and 653 intubated, according to the minister.

"There is a decrease in the number of cases, deaths, intensive care and intubated patients in the last 24 hours," Koca said.

The Iraqi health ministry said on Friday that 2,603 COVID-19 cases have been confirmed and 104 deaths recorded in the country.

In addition, 60 new cases were recorded after 2,337 testing kits were used across the country during the past 24 hours, the ministry said in a statement.

The new cases were 34 in the capital Baghdad, 12 in Basra, nine in Maysan, two in Dhi Qar and Salahudin each and one in Diyala, the statement added.

So far, 1,661 have recovered, according to the statement.

With detection of 253 more COVID-19 positive cases over the past 24 hours, the number of patients infected with the virus has risen to 4,033 in Afghanistan, Public Health Ministry spokesman Wahidullah Mayar said Saturday.

Four new positive cases have been confirmed in Kabul, 71 in Herat and the remaining 178 are in other provinces of the country, Mayar added.

Six patients have died due to the disease over the past 24 hours, totaling the deaths to 115 since the outbreak of the COVID-19 in February in Afghanistan.

Altogether 502 people have recovered from the disease in the country, Mayar added.