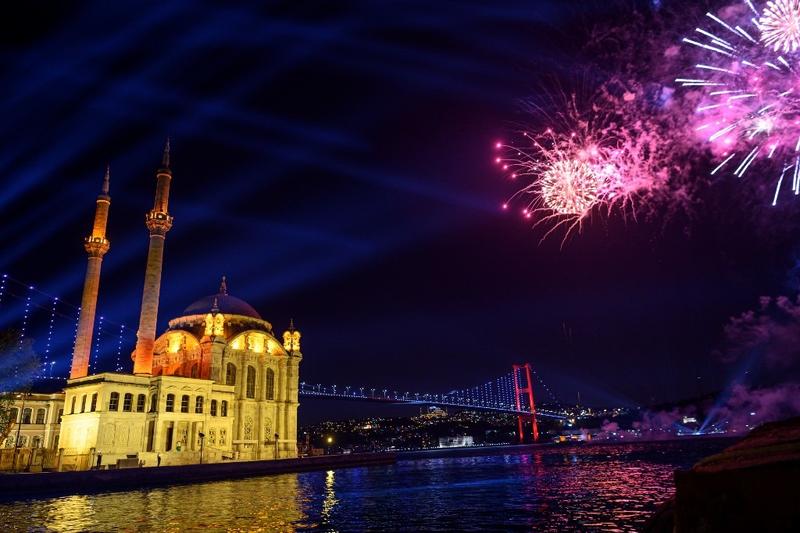 Fireworks explode above the Bosphorus bridge and the Ortakoy mosque to mark the Youth and Sports Day in Istanbul on May 19, 2020 during a four-day curfew aimed at curbing the spread of the COVID-19 pandemic, caused by the novel coronavirus. (OZAN KOSE / AFP)

The government is also talking with Australian universities about allowing the return of some international students, a sector that contributes more than A$30 billion (US$19.6 billion) to domestic coffers.

New South Wales, the country’s most populous state, will allow people to resume recreational travel from next month, effectively reopening tourist regions on its southern coast that were badly damaged by huge bushfires before the epidemic.

Australia has reported just over 7,000 infections, including 100 deaths, among its population of 25 million.

Australia’s states and territories are implementing a three-step federal government plan to unwind lockdown measures at a staggered pace, meaning different areas of the country have different restrictions.

The Afghan Ministry of Public Health on Wednesday said that 492 people, including 262 in the capital city Kabul, have been tested positive for COVID-19 over the last 24 hours.

The ministry said in a statement that 1,003 suspected cases have been tested during the period across the country, bringing the national tally to 8,145.

The number of confirmed COVID-19 cases in Bangladesh has reached 26,738 as 1,617 new cases were confirmed in the last 24 hours, the biggest daily jump since March 8, a senior health ministry official told a media briefing on television on Wednesday.

Cambodia has lifted a ban on entry of visitors from Iran, Italy, Germany, Spain, France and the United States that had been put in place to curb the spread of coronavirus, the health ministry said on Wednesday.

Despite the easing, foreign visitors would still need to have a certificate no more than 72 hours old confirming that they are not infected with the novel coronavirus and proof of US$50,000 worth of health insurance while in Cambodia, the ministry said.

They also would be quarantined for 14 days after arrival at government designate place and tested for the coronavirus, a ministry statement said, but did not specify where.

Cambodia has reported 122 cases of the virus that causes COVID-19 and no deaths from the disease.

India's health ministry said Wednesday morning that 140 new deaths due to COVID-19, besides fresh 5,611 positive cases were reported since Tuesday in the country, taking the number of deaths to 3,303 and total cases to 106,750.

This is the highest one-day spike in COVID-19 cases so far in the country.

Wednesday marks the 57th straight day of a nationwide lockdown announced by the Indian government to contain the spread of the pandemic.

Indonesia reported on Wednesday 693 new coronavirus infections, the Southeast Asian nation’s biggest daily rise and taking the total number of cases to 19,189, according to the website of Indonesia’s COVID-19 task force.

The task force reported 21 additional deaths, taking the total to 1,242, while 4,575 people have recovered.

The Iranian health ministry on Wednesday reported 2,346 new cases of the novel coronavirus, bringing the total number in the country to 126,949 since the outbreak in late February, state TV reported.

Kianush Jahanpur, head of Public Relations and Information Center of the Ministry of Health and Medical Education, said 64 patients died over the past 24 hours, taking the death toll to 7,183.

The Iraqi Health Ministry on Tuesday recorded 57 new cases of COVID-19, bringing the total number of infections to 3,611 in the country.

The new cases were 51 in the Iraqi capital of Baghdad, four in Basra and one in each Najaf and Sulaimaniyah, the ministry said in a statement.

The number of active COVID-19 cases in Israel has dropped below 3,000 for the first time since March 27, Israeli Ministry of Health said Tuesday.

The number of active cases in Israel decreased to 2,946, while the tally of confirmed cases rose to 16,659 after 16 new cases were reported.

The death toll from the respiratory virus rose from 276 to 278, while the number of patients in serious condition dropped from 52 to 50. 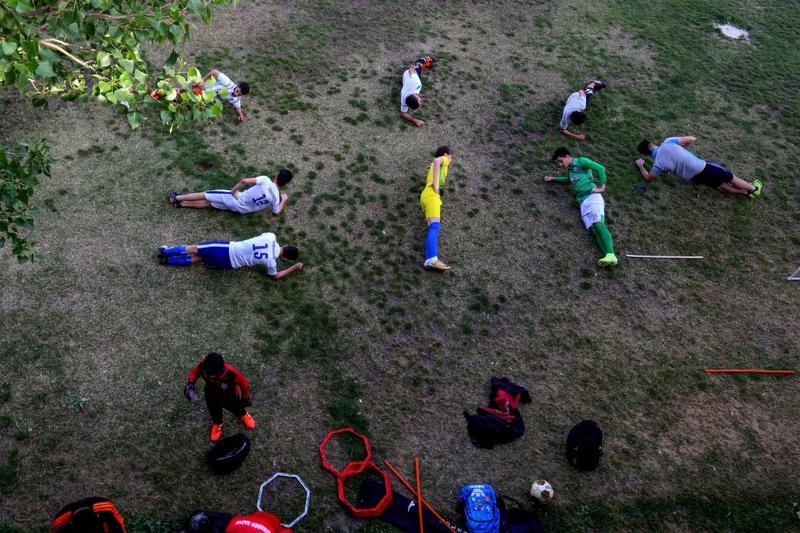 Iranian boys take a break around the Azadi stadium which remains closed due to the COVID-19 pandemic in Iran's capital Tehran, on May 18, 2020. (ATTA KENARE / AFP)

The Japanese government is considering lifting a state of emergency in Osaka, Kyoto and Hyogo prefectures as the number of COVID-19 infections there has remained low, the Asahi newspaper reported, citing an unidentified government official.

According to the Japanese government, the rate of new infections in the three western prefectures has fallen below 0.5 per 100,000 people in the past week, meeting a benchmark set by the government for the emergency declaration to be lifted.

However, the capital of Tokyo, the epicenter of Japan's outbreak, and its three prefectural neighbors Chiba, Saitama, Kanagawa as well as the northernmost prefecture of Hokkaido will remain under the state of emergency. The government will continue to carefully assess the numbers of infections in these areas.

Japanese Prime Minister Shinzo Abe will make the decision on Thursday after hearing opinions from health experts, according to government officials.

The minister said the current pandemic situation is under control and that the more economic sectors are opening up.

Kuwait reported 1,073 new COVID-19 cases and three more deaths, raising the total infections to 16,764 and the death toll to 121, the Kuwaiti Health Ministry said in a statement.

The Lebanese cabinet agreed on Tuesday to end the academic year for schools and cancel official exams amid increases in COVID-19 infections in the country, the National News Agency reported.

Students will take no official exams but continue their online education until the end of this month, it said.

The academic year in Lebanon was disrupted on multiple occasions, with schools closing during the mass protests last October and later as of March in accordance with coronavirus lockdown measures.

Lebanon's total number of COVID-19 infections increased by 23 cases to 954 on Tuesday, while the death toll remained unchanged at 26.

With an addition of 27 new cases confirming on Tuesday, the number of COVID-19 cases in Nepal has crossed 400 mark, the country's Ministry of Health and Population said.

The number of cases has now reached 402, ministry's spokesperson Bikas Devkota said at a regular press conference on Tuesday.

The number of COVID-19 cases in Malaysia totaled 7,009 after 31 new cases were reported, the Health Ministry said on Wednesday.

Health Ministry Director-General Noor Hisham Abdullah said that no new fatalities had been reported, leaving the total at 114 deaths.

Meanwhile, Defense Minister Ismail Sabri Yaakob told a separate press conference that 3,212 vehicles attempting to cross state borders to celebrate Eid al-Fitr had been turned back in the past day.

Ismail Sabri reminded the public that interstate travel is only allowed for emergency reasons.

New Zealand will progressively allow more freedoms within its current virus alert level as it tries to boost domestic demand and protect jobs, Prime Minister Jacinda Ardern said, as the Ministry of Health formally released the NZ COVID Tracer app on Wednesday to support contact tracing in the country.

The nation moved out of lockdown and into Alert Level 2 last week, allowing shops, restaurants, schools and public venues to open.

Ardern has faced criticism for stalling the economy after she imposed one of the most stringent lockdowns in the world in late March, but is now able to point to just 1,503 confirmed or probable cases of COVID-19, and only 21 deaths, as justification for her elimination strategy.

Oman on Tuesday announced 292 new COVID-19 cases, bringing the total number of confirmed cases in the country to 5,671.

All the new cases, including 119 Omanis, are related to community contacts, the Omani Ministry of Health said in a statement.

A Pakistani local legislator died on Wednesday after contracting COVID-19, hospital officials said, marking the first death of a political figure in the South Asian nation from the disease at a time the country has lifted its countrywide lockdown.

Pakistan has recorded 45,898 infections and 985 deaths to date from the respiratory disease caused by the novel coronavirus. Tuesday saw the most deaths in a single day reported, at 46.

Meanwhile, despite rising rates of infections and deaths, Pakistan continued to open up the country on Wednesday, with cross-country train operations restarting after almost two months.

Qatar's Health Ministry announced 1,637 new cases of COVID-19 infection, increasing the tally of confirmed cases in the Gulf state to 35,606. 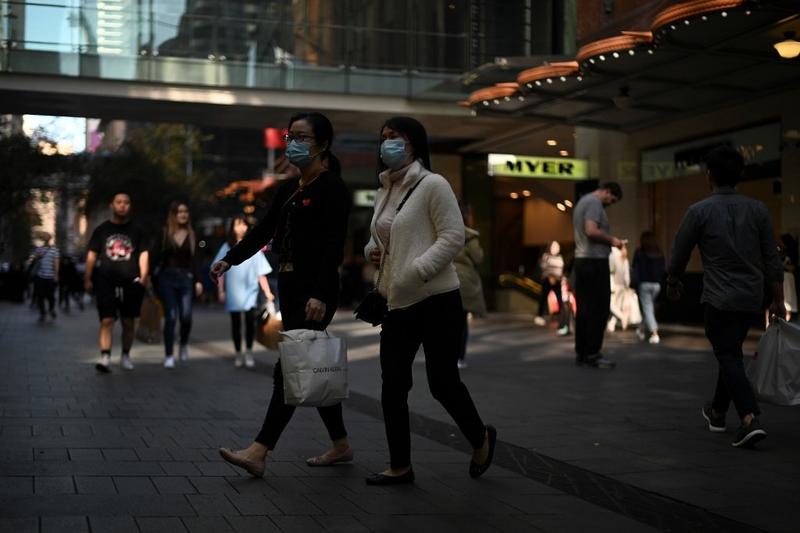 Saudi Arabia is preparing to use electronic wristbands to monitor people quarantined inside their homes as it seeks to facilitate home quarantine instead of medical isolation in quarantine facilities, Saudi Gazette reported.

Meanwhile, the death toll from the virus reached 329, with the registration of nine new deaths.

Singapore Trade & Industry Minister Chan Chun Sing said a faster economic recovery from the pandemic would depend on the availability of affordable, rapid test kits and the rollout of a vaccine.

“If either one of these or both come about in the next few months, then I think there’s a much better chance of us recovering faster,” Chan said Wednesday.

South Korea reported 32 new cases in 24 hours, the most since May 11, according to data from the Korea Centers for Disease Control & Prevention website. The total number of infected rose to 11,110 while nightclub-related cases in Seoul climbed to 193.

The discovery of new coronavirus cases in two students marred the reopening of South Korean schools on Wednesday, forcing 75 high schools to turn pupils away amid fears among some teachers that it was unsafe for classes to resume.

But with daily coronavirus cases sharply down since a February peak, most of South Korea’s 2,356 high schools reopened under new health protocols to prevent the spread of the disease. All schools will reopen in stages between May 20 and June 1.

The total number of positive COVID-19 patients in Sri Lanka crossed the 1,000 mark on Tuesday after 28 new patients were detected during the day, the government information department said in a statement here.

According to official figures, the country's total COVID-19 patients stand at 1,020, and 569 patients have recovered and been discharged from hospitals.

Thailand expects to have a vaccine for the novel coronavirus ready next year, a senior official said on Wednesday, after finding positive trial results in mice.

Thailand has reported a total of 3,034 cases of the coronavirus and 56 deaths.

The Philippines is considering downsizing lockdowns to villages from regions, as it balances further reopening its economy with stemming the virus outbreak.

Stricter curbs may be brought back should a second wave of infections occur, President Rodrigo Duterte said, as the government prepares for the arrival of more returning overseas workers. Malls and some businesses have been allowed to open in the capital since May 16. 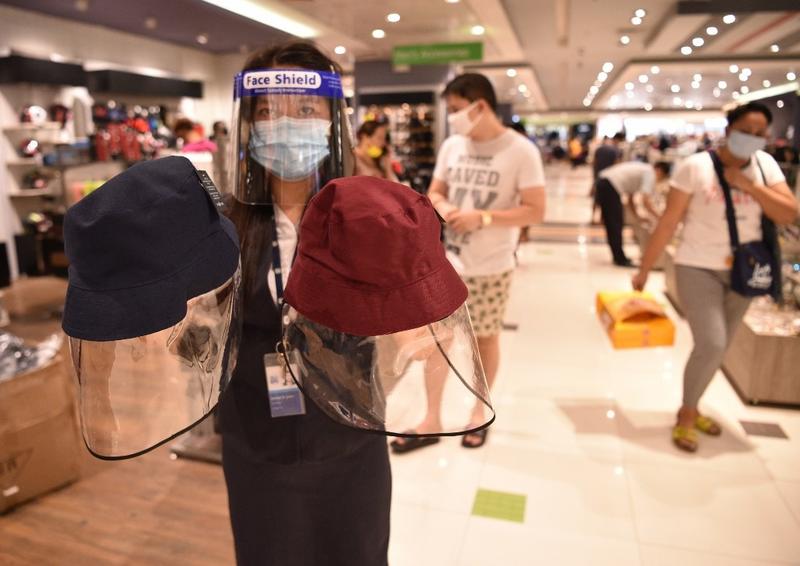 An employee displays face shields, amid concerns of the COVID-19 coronavirus, for sale at a retail store in Manila on May 18, 2020. (TED ALJIBE / AFP)

Turkish citizens ferried from abroad were spending 14 days under quarantine in student dorms where they were monitored for possible symptoms of COVID-19 disease.

The total number of confirmed cases in the country has climbed to 151,615 while the death toll surged to 4,199, Koca tweeted.

Turkey conducted 25,382 tests for the coronavirus in the last 24 hours, bringing the overall number of tests carried out to 1,675,517, he stated.

In addition, 112,895 patients have recovered from COVID-19 since the outbreak, while 882 are being treated at intensive care units and 455 intubated, according to the minister.

An Etihad Airways plane flew from the United Arab Emirates to Israel on Tuesday to deliver coronavirus supplies to the Palestinians, a spokeswoman for the Abu Dhabi airline said, marking the first known flight by a UAE carrier to Israel.

The UAE Ministry of Health and Prevention said that 1,214 patients fully recovered from the virus, taking the tally of the UAE's recoveries to 10,791, while the death toll rose to 227 after three fatalities were added.

The number of COVID-19 cases in Yemen increased to 167, after 37 new cases were confirmed on Tuesday.

The Yemeni health ministry said in a statement that during the past 24 hours, "37 new cases were officially recorded in six provinces controlled by the government."

It said that the number of recoveries increased to five since the outbreak of the novel coronavirus in the war-torn country on April 10.