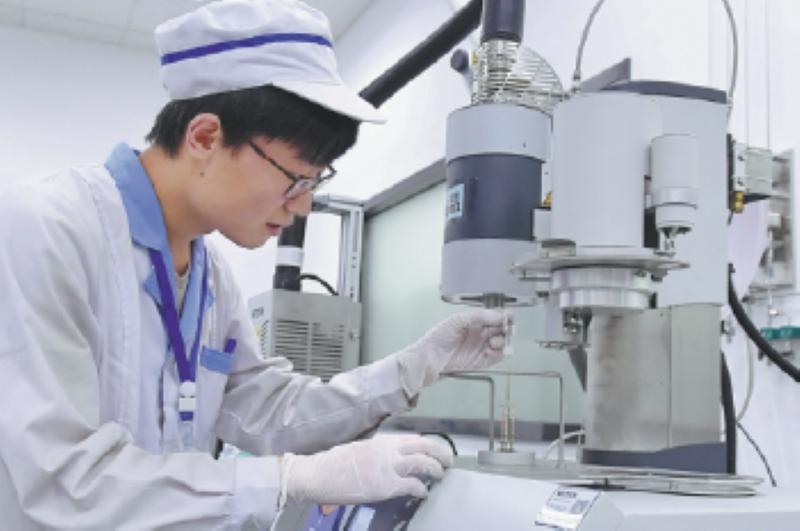 A technician tests the batteries at a CATL lab in Ningde, Fujian province. (PHOTO / XINHUA)

China's new energy vehicle initiative started in earnest in 2009 and in six years it became the world's largest market.

Some analysts believe that CATL and BYD's falling market share in the quarter was mainly because of the coronavirus pandemic, which hit China especially hard in February

The sector's meteoric development has generated behemoths of battery makers in the country, which had been sitting atop globally until very recently.

For three years since 2017, CATL headquartered in Ningde, a small Chinese city known for yellow croaker, ranked No 1 on the list of global battery producers in terms of market share, leaving behind traditional giants including Panasonic, LG Chem and Samsung. Another Chinese company BYD was high on the list as well.

Things took a turn in the first quarter of this year. According to SNE Research, South Korean battery maker LG Chem CATL's took throne with a 27.1 percent market share in the three months. LG rose to second position, boasting a 25.7 percent share.

According to SNE Research, LG Chem's installed capacity of 5.5 GWh in the first quarter, up from 2.5 GWh in the same period last year, was mainly thanks to the outstanding sales of the Tesla's Model 3s, Renault's Zoe as well as Volkswagen's electric cars.

Globally, Tesla saw its Model 3 deliveries rise more than 13 percent in the first quarter. Its China plant started to sport LG Chem's batteries from February, and the Model 3 was the best-selling electric car in the country in February and March, according to the China Passenger Car Association.

Some analysts believe that CATL and BYD's falling market share in the quarter was mainly because of the coronavirus pandemic, which hit China especially hard in February.

CATL Chairman Zeng Yuqun said last week that the pandemic did affect its production and operations for a while, but added that the market is recovering as China has been effective in curbing the spread of the coronoravirus.

Cui Dongshu, secretary-general of the China Passenger Car Association, said the pandemic was just one factor in the fast-evolving global battery market, and other changes deserve attention as well.

For example, Tesla wants to produce batteries itself. Volkswagen, which aims to sell 1.5 million electric vehicles a year in China by 2025, is planning to acquire a stake in smaller Chinese battery maker Guoxuan. And Panasonic and LG Chem are building plants and partnerships in China.

CATL and BYD have long been pushing the technological frontiers of the sector, with a number of new products.

Zeng said CATL is scheduled to provide batteries for Tesla starting later this year, and their cooperation is not limited to China and not even to battery procurement.

" (Elon) Musk told me that Tesla wants to produce batteries itself, and as far as we know, their method will not affect ours.

"And we are discussing how to make better batteries together," he said, adding that CATL is also making progress in other technological trends including cobalt-free batteries.

Pan Jian, vice-chairman of CATL, said the company is not fearful of any rival.

"We are convinced in our long-term dedication and capabilities of innovation. Our product quality, cost advantage and service thanks to our manufacturing experience and scale of production will become more evident globally." Over the past few years, CATL has been a sought-after battery maker, sitting on the list of suppliers for carmakers ranging from BMW to Daimler and Volkswagen.

BYD is coming up with new products and partnerships as well. It has reached several deals with Toyota in terms of electric vehicles, besides deals for battery supplies to a number of Chinese carmakers including Changan, Chinese partner of Ford and Mazda.

In late March, it unveiled a new blade-shaped battery, saying that many carmakers have shown interest in the space-saving and safer product.

He Long, president of BYD's battery business unit FinDreams, said, "Almost all carmakers you have heard of are in talks with us in terms of technical cooperation."

He said the company has started mass production of the blade battery at its Chongqing plant.

Thanks to its structure, the battery can better use the space in the battery pack that drives an electric vehicle.

BYD said it can increase the energy density per unit of volume by 50 percent.

The structure and the materials used make lithium iron phosphate batteries much safer than the commonplace ternary lithium batteries, which outperform in range but have poor thermal stability.

BYD Chairman Wang Chuanfu said lithium iron phosphate batteries were mainstream products in the early development stages of the electric car sector, but as customers wanted cars with longer ranges, many carmakers have gradually replaced them with ternary lithium products.

"But their widespread use has resulted in the rise of electric vehicle fire accidents," said Wang said.

He said that BYD will not keep the technology to itself, and hopes the product can attract carmakers to go back to lithium iron phosphate products.

BYD's first model to sport the new blade battery will be a sedan called Han. Scheduled to hit the market in June, it will have a range of 600 km on one charge.