The novel coronavirus is forcing more stranded passengers to use private jets despite the high cost of flights. Edith Lu reports from Hong Kong. 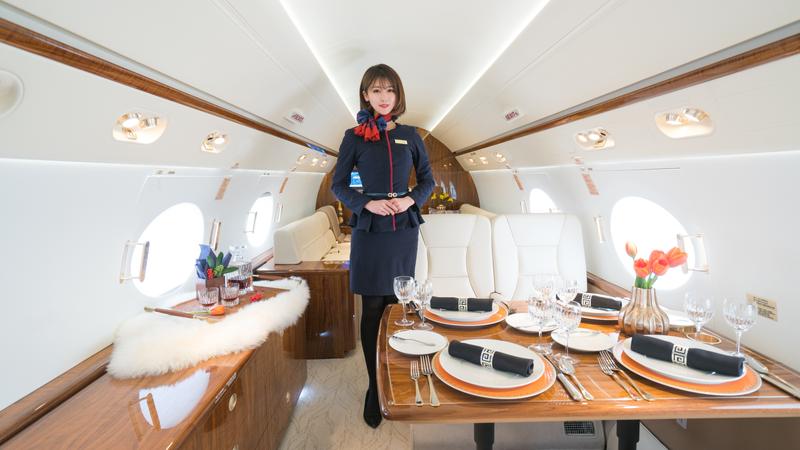 “It’s the most expensive air ticket I’ve ever paid for in my life,” recalls a young student, ostensibly from one of the ultra-rich Chinese mainland families, as he tells about how his family dished out a staggering 2.5 million yuan (US$353,000) to fly him back from the United States to the mainland on a specially chartered private aircraft early last month.

It was at the peak of the scramble by thousands of panic-stricken people to get out of coronavirus-ravaged Europe and the US.

People realize they’ve to spend money to avoid being cooped up in large commercial aircraft, or at airports swamped with people they don’t know. The advantages of a private jet have really come to the forefront

Sharing his experience on Shanghai-based Xiaohongshu — one of the world’s largest social e-commerce platforms for users to review products or relate their escapades with the community — the New York University student recounted the 17-hour flight from Big Apple aboard the 12-seater Bombardier Global 6000 jet, which landed in Hong Kong on April 7 after a stopover in Anchorage, Alaska.

As a Hong Kong resident, he was allowed to enter the city, and made his way back to Shenzhen across the boundary after completing his mandatory 14-day quarantine in the SAR.

There’s a similar story about two months ago of a flurry of people clamoring for a seat on a private jet from London to Shanghai with a price tag of 180,000 yuan as the COVID-19 pandemic brought the world’s commercial aviation market to its knees.

The coronavirus turmoil has suddenly thrust what’s traditionally seen as exclusive, swank private-jet travel out into the open, seemingly no longer an ultimate luxury for the super-rich or something out of passion or improvidence, but an absolute necessity in times of crisis. It has caught up with Chinese students and businessmen alike in Europe and the US, clambering to get home for fear of contracting the coronavirus, with China seen as safe ground as infections are reduced to a trickle.

Due to locked borders and crippled commercial flights, they haven’t got much of a choice but to pay through their nose to hop onto flights that come just once a week, or opt for private flights that are safer and more convenient, but cost a pretty penny.

The quest for short-notice, on-demand private-jet charters has gone through the roof, particularly long-haul flights, with private aviation companies’ phones ringing off the hook for inquiries.

Sino Jet — a business jet management company headquartered in both Hong Kong and Beijing — has 45 aircraft under its wing. It said it has been on the receiving end of some 2,000 requests lately for business-jet flights from students and anxious parents, and the company is running out of resources.

Malta-based VistaJet, whose fleet boasts more than 70 ultra-long-range Bombardier Global 6000 business jets, is among a handful of private-jet companies with offices in Hong Kong and on the mainland. It saw a 16 percent, year-on-year surge in the number of times its aircraft had taken to the air in the first two-and-a-half months of this year. In China, the increase in flights during the same period was 19 percent, mostly to and from Hong Kong and Macao.

The Hong Kong Business Aviation Centre, which operates business aircraft round the clock, providing technical support, ground handling and passenger and crew services, said business-jet flights have gone up 3 percent in the first quarter, compared to the same period a year ago. The demand has been greater since the Spring Festival in late January, with a big portion being charter flights.

“This time round, people realize they have to spend money to avoid being cooped up in large commercial aircraft, or at airports swamped with people they don’t know. The advantages of a private jet have really come to the forefront,” Ian Moore, chief commercial officer of VistaJet, told China Daily.

According to Moore, for the greater part of February, they flew clients out of Asia which, at the time, was most severely affected by the outbreak. But, subsequently, it was the other way round. The huge air traffic volume was Asia-bound in March, with Italy emerging as the hotspot of the global pandemic after the coronavirus changed course and took on the rest of the world.

“Moving into March, it was probably one of the easiest times (to get clients) and the busiest time in terms of operations,” said Moore. He added that he saw the demand at its peak in China in March.

The HKBAC also confirmed that the majority of recent flights involved repatriating people stranded in some of the worst-hit countries and regions in Europe and from the US.

The list of perks involving private-jet travel is long — privacy, comfort, flexibility, VIP-like escorts at airport terminals, free baggage handling on top of the prestige that comes with it.

These days, many passengers on chartered flights are newcomers to the private jet age. According to VistaJet, in the first two weeks of March, they flew many regular members and their families back to their homes or “safe” places. The situation took a twist from the second half of March, with more new and one-off customers seeking charter flights to various locations. VistaJet then started offering more “individual repatriation flights”, which the company, normally, wouldn’t do.

A Sino Jet spokesperson said it was the first time for most of the Chinese students in Europe and the US to fly on private business aircraft. The company had to be particularly careful in transferring them to airports to make sure they wouldn’t be exposed to the virus.

“The skyrocketing prices may not seem reasonable in terms of the cost-to-income ratio. But, it’s inevitable with aircraft in short supply,” said Lin Zhijie, an aviation industry analyst.

Usually, the cost of air-charter travel is dictated by a host of factors — the type of jet preferred, reposition locations, the availability of take-off and landing airports, as well as the flight hours to be consumed.

A large majority of the air-charter market supply is made up of inactive aircraft owned by the ultra-rich, said Moore. As the pandemic escalated, many aircraft that had been in the market earlier in the year have been “retrieved” by owners who want to keep them for themselves, or they are reluctant to let strangers use them.

With a dearth of planes at departure locations, private-jet operators are forced to find new resources and use empty aircraft to pick up clients. This is a key element in the rising cost of air-charter services, according to Sino Jet.

The private jet company expects demand to stay high in the coming two months as the coronavirus threat in many countries remains grave. By the end of March, the so-called repatriation surge in air travel had ended with stricter measures in place in various countries.

To contain the risk of imported COVID-19 cases, the Civil Aviation Administration of China has enforced stringent regulations on the number of inbound private-jet flights, with just up to five flights permitted to land in cities on the mainland each day. However, the actual number of daily flights could be three.

According to the latest statistics released by WingX — a data analytics data firm specializing in the business-jet industry — global business aviation activity has dwindled by 68 percent from April 1 to May 5.

“Most people have got home or arrived in safe locations by now. So, you’re seeing a downward push on pricing given the fact that not many people are flying as they were before,” said Moore.

Considering the economic shock from the pandemic, he expects the wealthy elite to use air-charter services more instead of buying their own jets in future after the virus is gone.

With the cautious and gradual relaxation of virus-suppression policies, the entire private aviation market is looking for signs of recovery in various regions of Asia, especially in their domestic markets.

Sino Jet sees the demand for China’s domestic private-jet flights possibly making a rebound in the next three months as people shake off their virus nightmares and return to work.