Despite a 2016 law, lenient punishments and a reluctance to prosecute mean attacks continue. Yao Yuxin reports. 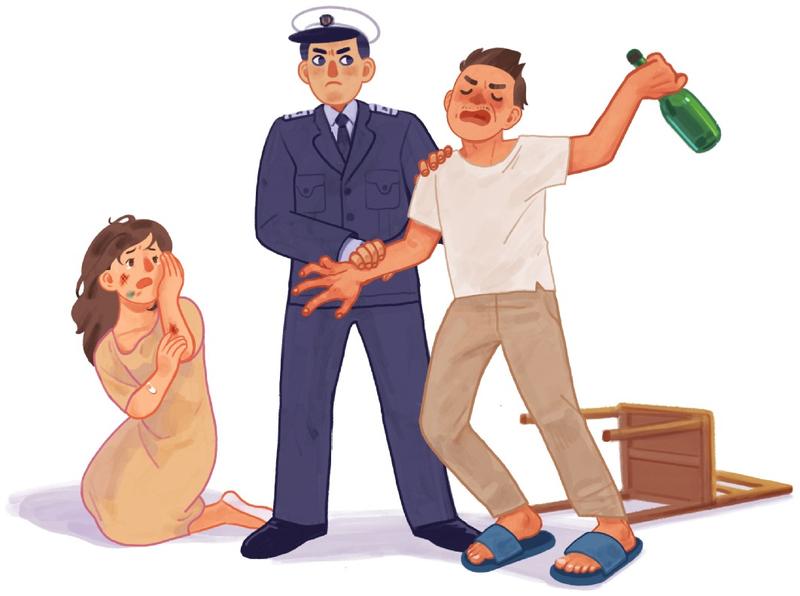 In 2009, Dong Shanshan was beaten to death by her husband. Before the fatal attack, the 26-year-old Beijing resident had unsuccessfully tried every available option to end the domestic violence that had plagued her 10-month marriage.

She called the police eight times. She sued for divorce. She escaped to her parents' home to shelter. She twice ran away from family and friends in attempts to hide. None of these actions saved her life.

The family should not become a cover for crime. The law should give people confidence in justice

She faced increasingly severe beatings at home. During the fatal attack, her husband hit and kicked her all over her body, beating her so many times that he could not remember the number of blows when questioned by police.

With several fractured ribs and ruptured internal organs, Dong's abdomen was so full of blood that it swelled as though she had a full-term pregnancy. The doctor who treated her said it looked as if she had been assaulted by a gang.

Dong was so badly injured that she received considerable attention the minute she arrived at the police station. Nevertheless, when the officers heard that she had been attacked by her husband, they quickly changed their tune, according to Li Ying, a public interest lawyer and director of the Yuanzhong Gender Development Center in Beijing, who acted on Dong's behalf.

They told her to think carefully, because the complaint could send her husband to prison, and asked if she really wanted him to go to jail.

Li added that instead of allowing Dong to file an official report, the police urged her to go to the hospital and said the case could be discussed later. She added that Dong's condition deteriorated so rapidly that she lost her last opportunity to press for action, which led to lenient treatment of her husband.

Many victims of domestic violence are trapped in a similar dilemma, and they are often blocked when they seek help.

On Feb 19, a woman surnamed Cao in Shenzhen, Guangdong province, pleaded unsuccessfully for her boyfriend to stay home and not go drinking with friends because of the threat posed by the novel coronavirus.

When the boyfriend returned, he was drunk. He beat the 27-year-old, slapping her face, grabbing her by the throat and banging her head against the wall. He also threatened to kill her.

When Cao tried to prosecute her boyfriend, a police officer asked: "Is that necessary? You really want to destroy him? Have you thought about his future?" Cao recorded the interview on her phone and posted it on the internet as proof of the problem.

Li, the lawyer, said: "Many victims feel helpless and lonely. Sometimes, their failure to break free of abuse is not the result of a lack of legal awareness, but because the authorities have been unhelpful."

Statistics from the All-China Women's Federation show that approximately 30 percent of married women in China have experienced domestic violence.

Meanwhile, the World Health Organization claims domestic violence is not just widespread in China, but across the world. WHO figures show that in 2017 about 30 percent of women worldwide experienced physical or sexual abuse.

"No group is more vulnerable to domestic violence," Li said. Many people believe that attacks on close partners mainly occur among the lower classes, but the incidence rate may not be markedly different among the highly educated or elite groups, she added.

That's because domestic abuse among those groups may happen covertly, such as emotional violence or physical assaults on parts of the body where bruises can't be seen.

In one case Li handled, a doctor usually hit his wife on the head, because her hair would cover the scars. Occasionally, he hit other parts of her body, but he wrapped a towel around his fist to minimize bruising.

"Anyone can be a victim," Li said. 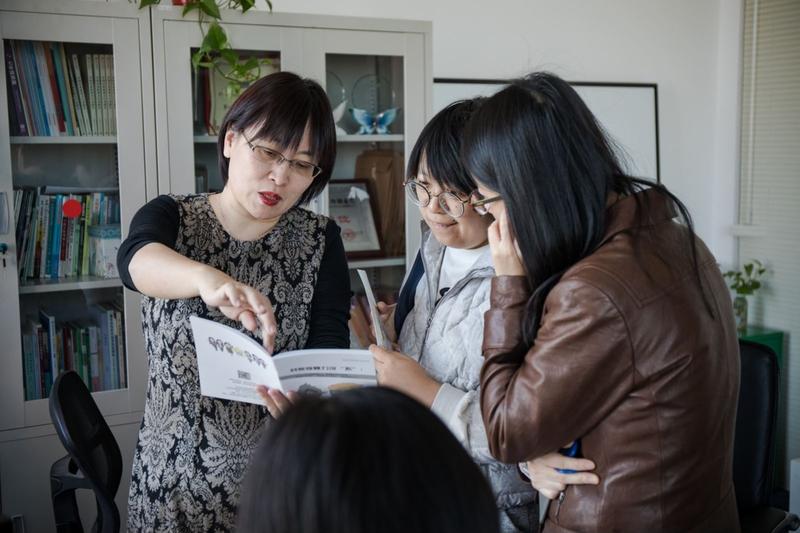 The legislation－a milestone in the country－stipulates that attacks on family members are a violation of their legal rights rather than private affairs.

Moreover, the State, society and the family share a collective responsibility to end such abuse.

Yet the frequent lack of punishment lets down vulnerable women, and they are likely to face another dilemma if they pluck up the courage to call the police.

In China, it is traditional to regard domestic violence as a family scandal, meaning many victims feel ashamed. That often discourages them from seeking help.

On average, women are attacked 35 times before they call the police, according to the All-China Women's Federation.

Li said: "The thinking and capabilities of relevant departments, including the courts, police forces and women's federations, have not kept up (with the times). If they have a poor understanding of the law, they are unable to take appropriate action."

Theoretically, there are no conditions on the application of the law.

In reality, an unofficial threshold has been established that requires the victim to have been assaulted more than once or the blows must result in serious consequences, such as fractures at the very least.

This unofficial restriction has resulted in courts classifying only a small number of cases as domestic abuse.

The same applies to the issuance of protection orders intended to safeguard potential victims. Many judges are reluctant to issue such orders, Li said.

According to the Supreme People's Court, the country's top tribunal, despite the large number of cases of domestic violence, by the end of 2018, just 3,718 protection orders had been issued by courts nationwide from 5,860 applications.

Meanwhile, there is still no recognized format for written warning papers, legally binding documents that can be issued against attackers by the public security authorities.

The documents have proved effective in cases where the police do not consider the situation serious enough for administrative or criminal penalties. However, they are rarely served on assailants, and some areas have yet to issue any.

"These loopholes mean we still fail to take full advantage of the law," Li said. 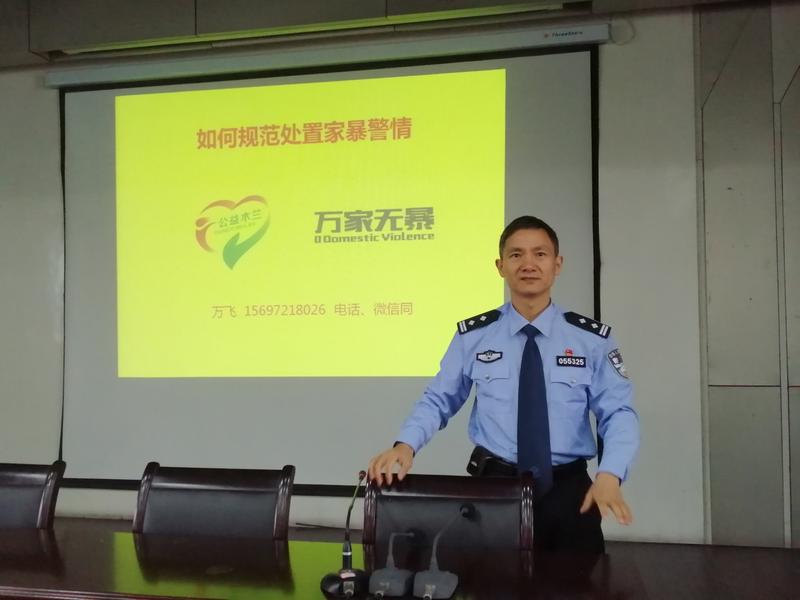 Wan Fei, a police officer in Jianli, Hubei province, noticed that many victims of domestic violence find it difficult to get help from the authorities.

In response, he founded Lantianxia in 2015. The nonprofit organization focuses on the protection of women's and children's rights, and, crucially, also coordinates the work of women's federations, the police and courts to provide a support network for victims.

With real-time access to information provided by police, Lantianxia can advise victims on their rights and options and refer them to services and support organizations.

In June 2018, that cooperation helped a victim of domestic violence in Jianli, when a woman who was pushing for a divorce was seen sitting alone on the edge of a roof. She had one leg hanging over the side and was threatening to jump.

A counselor managed to dissuade the woman, and within 30 minutes, police officers had handed her a written warning that had been served against her husband. The document bore a signed confession of violent behavior.

Within two hours, a court had issued a Civil Mediation Document that sanctioned a divorce.

When Wan founded his NGO, some colleagues and friends questioned whether it was necessary to work so hard on what many people regard as minor issues.

"Many police officers don't realize that domestic abuse has a high fatality rate," he said.

According to the All-China Women's Federation, 60 percent of the average 157,000 female suicides per annum are the result of domestic violence. In Jianli, about 29 percent of all murders committed since 2011 were related to spousal abuse.

A lack of training means many police officers hold outdated views and commonly avoid interfering in "family disputes", which shows a disregard for their legal obligations, according to Li and Wan.

In his training courses for officers who deal with domestic abuse, Wan emphasizes that the high death rate prompts many officers to take action, which benefits both the victims and the officer.

That's because a high mortality rate could affect the officer's career prospects, while any suggestion of negligence could see them lose their job and also face punishment.

There is also a specific process to follow. When a call about domestic abuse is received, police take two warning documents to the scene. The form takes no more than five minutes to fill in, and Wan said there are several scenarios in which officers are obliged to take the alleged perpetrator to the police station.

"Sometimes, the police want to take action, but don't know how to do so," he said. By making it easier to operate in practice, officers are more likely to solve the problem at once, rather than handle repeated calls from the victim.

Li, the lawyer, said abusive relationships are about power and control, so they are a gender issue.

Moreover, the victims are usually blamed. At the very least, they are assumed to be partially responsible as they may have "annoyed" the man or "hurt his pride".

"The attitude is, 'Your husband is wrong to beat you, but you are wrong, too.' Then one side's fault offsets the other," Li said, adding that a patriarchal society will always find excuses to defend male attackers, but the fact is that nothing can excuse such behavior.

She said it is important to adopt a zero-tolerance approach and nip domestic violence in the bud, rather than allowing it to become a vicious spiral of escalating violence until the worst consequence occurs－death.

As representatives of State power, it would deal a big blow to perpetrators if officers took a firm stand against such abuse.

Written warnings are more effective than verbal criticism because they are formal.

Wan has analyzed all 2,400 cases his organization has handled. He said that contrary to concerns that involving the authorities could aggravate the problem, the rate of recurrence falls to 10 percent after an oral warning and to 1 percent after a written warning.

"The heavier the punishment, the stronger the impact," he said.

According to Li, lenient punishments may also be a factor in abuse. It is not just the fact that the attackers are unable to control themselves, but that the cost of breaking the law is negligible.

Wan said that since Lantianxia began coordinating efforts in 2015, the Jianli authorities have received a growing number of calls from victims, indicating a rise in people's confidence in them.

In Jianli, domestic violence is no longer a costless crime, but a shortage of supervision means police often fail to act.

Dong Shanshan's case attracted widespread attention. However, her husband was charged with assault rather than intentional homicide and was sentenced to just six and a half years in prison.

Many other perpetrators of domestic violence are lightly punished and some cases are just buried, according to Li.

"The family should not become a cover for crime," she said. "The law should give people confidence in justice."