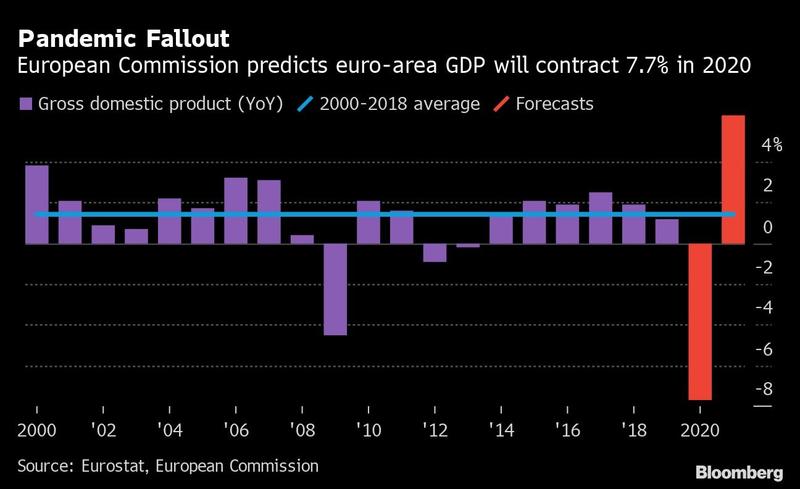 BRUSSELS - The euro zone economy will contract by a record 7.7 percent this year because of the COVID-19 pandemic and inflation will almost disappear while public debt and budget deficits will balloon, the European Commission forecast on Wednesday.

“Europe is experiencing an economic shock without precedent since the Great Depression,” European Commissioner for Economic and Financial Affairs Paolo Gentiloni said.

“Both the depth of the recession and the strength of recovery will be uneven, conditioned by the speed at which lockdowns can be lifted, the importance of services like tourism in each economy and by each country’s financial resources,” he said.

The Commission forecast that, as the economy contracts this year, consumer prices will almost stagnate. The inflation rate will slow to 0.2 percent in 2020, before accelerating to 1.1 percent next year. Investment will plunge 13.3 percent this year, it said.

The effort to keep economies alive will boost budget deficits in the euro zone to an aggregate 8.5 percent of GDP this year from 0.6 percent last year, before the aggregate gap shrinks again to 3.5 percent in 2021.

A surge in public debt, however, will take longer to undo, the Commission said, forecasting that euro zone debt will jump to 102.7 percent of GDP this year from 86 percent last year, and receding only to 98.8 percent in 2021.

Officials warned that the pandemic crisis risks widening the gulf between northern and southern euro nations and pushing the bloc to the breaking point because of differing exposures to the tourism industry and governments’ capacity to support businesses and households. 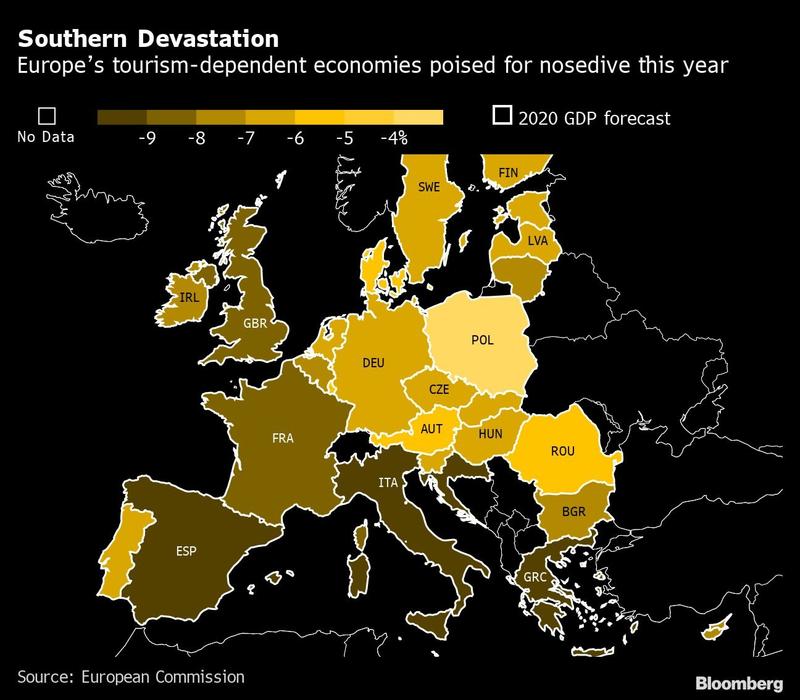 Italy, Greece, Spain and Portugal will be among the hardest hit by the economic effects of the pandemic, while Luxembourg, Malta and Austria are to weather the shock better.

Such divergence poses a threat to the single market and the euro area -- yet it can be mitigated through decisive, joint European action

“Such divergence poses a threat to the single market and the euro area -- yet it can be mitigated through decisive, joint European action,” Economy and Financial Affairs Commissioner Paolo Gentiloni said in a statement.

Greek GDP is to contract the most, by 9.7 percent, with Italy recording the second deepest recession of 9.5 percent and Spain 9.4 percent.

The budget deficit of Italy, the EU country hardest hit by the coronavirus, will surge the most to 11.1 percent of GDP this year from 1.6 percent last year, but will fall back to 5.6 percent in 2021, the Commission forecast.

Spain’s deficit will just exceed 10 percent this year, up from 2.8 percent in 2019 and France will be close behind with a budget gap of 9.9 percent this year. The Commission expects it to fall to 4.0 percent next year.

The forecast came as IHS Markit’s Purchasing Managers’ Surveys showed that Italy and Spain, the two European countries most severely hit by the coronavirus, are suffering even deeper slumps after record contractions in the first quarter.

In Italy, a PMI for services dropped to 10.8 in April. Spain saw its gauge slumping to 7.1, with hotels, restaurants and transport providers particularly badly affected.

The latest projection -- broadly in line with recent IMF numbers -- is still subject to a high level of uncertainty and the risk of an even deeper slump is “very real,” according to Maarten Verwey, the commission’s chief economist.