Up to 2,300 premature deaths blamed on air pollution were recorded in Hong Kong by the Environmental Protection Department last year. The grim figure is, ironically, positive compared with 6,300 people who died prematurely from air pollution in 2014, with a 52 percent decline in medical expenditure to HK$99 million ($12.77 million) in 2019, from HK$205 million five years earlier.

Even more alarming, amid the threat from the COVID-19 pandemic, is the weakening of our natural immune system due to air pollution. By the latest count, more than 2.6 million people worldwide have contracted the novel coronavirus, with many more exposed to the lingering risk.

Although COVID-19 is too recent for data trend analysis and we can’t see the direct relationship between the infections and air pollution at present, global medical experts said that, from different perspectives, polluted air irritates the body’s airway and inflames the lung’s thin tissue layer.

The Hedley Environmental Index, compiled by the University of Hong Kong, found that air pollution was responsible for up to 2.3 million doctor visits, 127,140 hospital bed days and 1,745 deaths in the city in 2019.

“For health risks, we should look to the average eight-hour ozone concentration, recommended by the World Health Organization, as sustained exposure to high concentrations of ozone could cause respiratory damage,” an EPD spokesperson said.

According to the department’s data for last year, only five of the city’s 16 ambient and roadside air monitoring stations recorded levels within the WHO’s guideline. Tap Mun — a small island in the northeastern New Territories with only about 100 inhabitants — had 51 days of eight-hour zone concentration above the recommended level of 160 μg per cubic meters — the highest registered on the island since data records began in 1999. Tap Mun has no local source of air pollution, but is affected by wind-borne toxic air.

The WHO’s ozone guideline allows countries and regions to set their own compliance standards. The Hong Kong government aims to keep the number of days breaching the WHO limit to below nine in a year. The highest daily maximum eight-hour ozone concentration in 2019 was recorded in Tuen Mun, at 337 μg/cu m — more than double the WHO’s recommendation. In 2016, all stations across Hong Kong, except that on Tap Mun, recorded fewer than nine days when the WHO limit was breached.

The EPD said meteorological factors, including typhoons and monsoons, contributed to the ozone surge in 2019. The downdrafts from tropical cyclones turned the city into a vortex for precursors to fully react into ozone. Precursors are chemicals that react to create ozone. The downdrafts hold the ozone from dispersing.

Amos Tai Pui-kuen, associate professor of the Earth System Science Program of the Chinese University of Hong Kong, says “Ozone is a secondary air pollutant. You can’t get to it directly. You can only manage it by controlling its precursors.”

Ground-level, or near-ground level ozone, is the main component of photochemical smog, which develops when the nitrogen oxides (NOx) from vehicle exhaust react with volatile organic compounds (VOCs) from solvents, hair spray, paints, printing, and other sources, catalyzed by sunlight.

How is ground-level ozone formed?

Ground-level ozone is harmful. It is formed when volatile organic compounds (VOCs) react chemically with vehicle fumes of nitrogen oxides (NOx) under sunlight.

Exposure to high levels of ground-level ozone can cause premature death to those already suffering heart or lung disease. Children who play outdoors, risk asthma and bronchitis.

Over 100 VOCs contribute to the ground-level ozone reaction, of which about a third flow naturally from trees and other plant life. That’s why tackling the ozone pollution problem is hard, said Tai. Paradoxically, at an early stage, if the NOx goes down, so does the ozone, but when NOx falls below a certain point, ozone goes up again.

The inter-relationship is non-linear. Nitrogen monoxide (NO) from automobile exhaust can consume ozone in the ambient air, but as NO from vehicle exhaust reduces through fossil-fuel controls, it would also limit ozone consumption in the roadside areas, causing net ozone to increase, explained Tai.

At ground level, ozone is a major pollutant, along with particulate matter (fine dust) of PM10, PM2.5, nitrogen dioxide, carbon monoxide, and sulphur dioxide. The EPD says Hong Kong’s ozone concentrations in 2019 hit their highest level in 21 years, while other pollutants declined between 34 and 82 percent over the same period.

Ozone is one of the greenhouse gases, which increase with global warming. The Intergovernmental Panel on Climate Change (IPCC) said global temperatures rose by 1 C above pre-industrial levels and will rise by another degree Celsius by the end of the century.

“But trees, one of the major sources of VOCs, can also mitigate ozone pollution if we plant the right ones,” said Tai. We need trees with lower emissions of VOCs and higher absorption of ozone in urban areas, to counter-balance the VOCs produced from other sources, he added.

Wang Tao, chair professor of atmospheric environment at Hong Kong Polytechnic University, has done extensive research on ozone over more than two decades. He said extraneous ozone contributes to about half of the city’s air pollution. The university has established an air monitoring station at Cape D’Aguilar on the southeastern tip of Hong Kong Island to monitor cross-boundary ozone.

Wang says ozone drifting in from the Pearl River Delta (PRD) has stabilized over the past decade. The air pollutants blown by monsoons from Southeast Asia, while contributing a small fraction of the city’s overall ozone concentration, have gone up by 20 percent, or about 6 μg/cu m, over the past two decades.

“The background ozone has reached a turning point. With the PRD’s efforts to eradicate precursors further, we can expect a change for the better,” he said.

Wang uses a computer model to examine the interplay of ozone’s precursors, climate, basic chemistry, and physics. He hopes to calculate the precise influence of each factor within the overall problem, so that scientists would be able to offer better guidance for future planning.

Authorities in Hong Kong, Macao and Guangdong province are planning a joint study to combat the rising ozone levels. Hong Kong and Guangdong are adding real-time VOC monitoring to their regional air monitoring network. It includes plans for three-dimensional monitoring, using light detection and ranging (LIDAR) technology to measure concentrations of ozone and PM2.5 at high altitude, to understand how they form and flow into the wider atmosphere.

Data from Guangdong’s Department of Ecology and Environment showed that during 64 percent of the days in 2019, when air pollution exceeded the safety limit, ozone was the prime culprit. Among the 21 prefecture-level cities in Guangdong, seven show ozone concentrations exceeding the WHO guideline.

Guangdong is the industrial powerhouse generating VOCs from refineries, power plants, industrial boilers, printing, and furniture manufacture. The department plans to limit VOCs for ozone reduction. Controlling nitrogen dioxides by reducing the use of fossil fuels will continue.

Wang argued that the most effective remedy for air pollution would be electric vehicles (EVs), which would get rid of the problem altogether.

In days when air pollution is high, and the city is shrouded in hazardous smoke, Hong Kong’s high rises block the dispersal of the bad air. Residents can taste the vehicle exhaust while waiting for buses. Switching to electric for public transport and ferries would be an immediate relief. Roadside air quality would improve. Air pollutants, including ozone, would be reduced, said Wang.

The EPD argues that EVs are still technically immature. The batteries have a disposal problem with a limited lifespan and low energy density. Charging time is long. The EPD is not convinced that electric vehicles are a suitable solution for the hilly streets of Hong Kong.

The government is testing electric ferries and light buses. Apart from over 1,000 e-charging stations to be built in public car parks, the government allocated HK$2 billion to subsidize car parks for EVs in October last year. But that seems a relatively trivial measure to alleviate the rising ozone pollution. 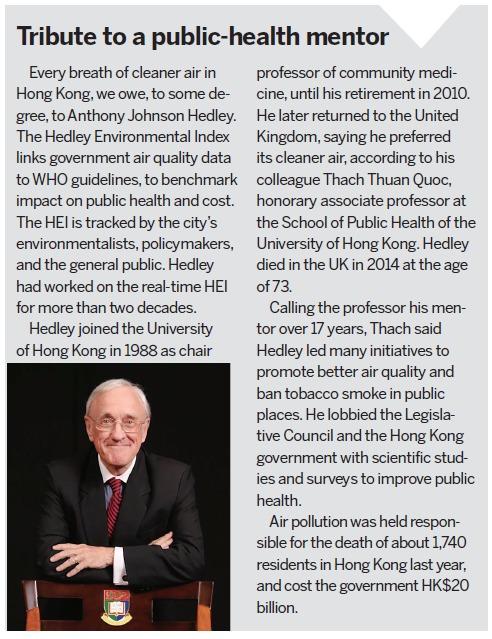