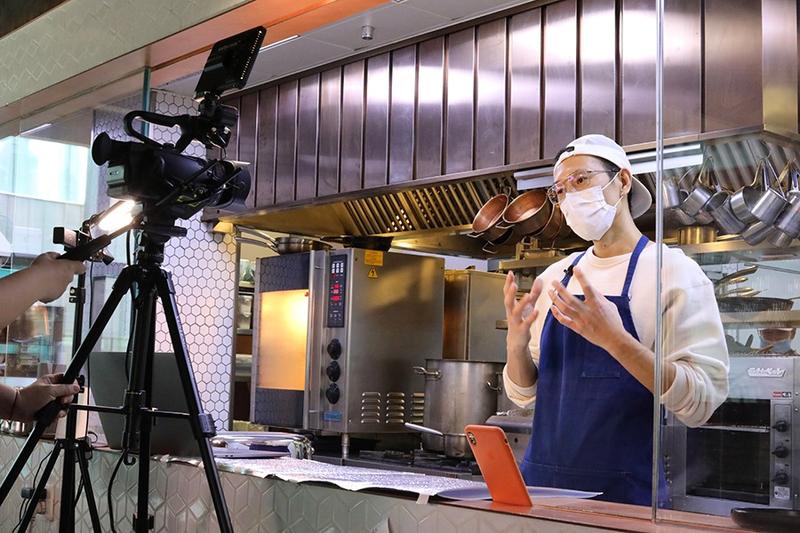 A small, open area is situated in front of In & Out, a restaurant specializing in cuisine from Yunnan province, located in Sanlitun, the prominent restaurant, bar and entertainment area in Beijing.

Every weekend since March 15, restaurant owners, florists and vegetable sellers have flocked to an outdoor market held on the site to sell their products.

The market was organized by In & Out owner Li Gang to help his suppliers sell their produce from Yunnan and for restaurants in Sanlitun to sell their specialties.

"By helping them, I am helping myself. People come to wander around the market, and they may also come to my restaurant to eat," Li said.

The catering industry has been hit hard by the novel coronavirus pneumonia outbreak. Restaurants have developed creative ideas to reduce losses－ranging from livestream broadcasts to community ventures. Some are even sharing their employees' time with factories and other businesses.

According to the National Bureau of Statistics, the industry's income for the first two months of this year was 419.4 billion yuan (US$59.2 billion), down more than 43 percent year-on-year.

The majority of restaurants reopened last month, but the number of customers has been low.

Li said, "The takeout market has been intensely competitive. Thousands of restaurants, which never offered such services before, have joined the market."

Li has been selling semi-cooked products on WeChat since the beginning of February. He offered Yunnan special preserved ribs as his first half-cooked product online, selling more than 300 portions in the first week.

"This is one of the most popular dishes among walk-in diners, and it's easy to cook. All the ingredients are readily available, and customers only have to boil them together to enjoy a meal," Li said.

After seeing that there were no buyers for fruit and vegetables from his suppliers in Kunming, capital of Yunnan, Li decided to sell vegetable gift bags and some local snacks, such as tofu, on WeChat.

"All the raw ingredients are shipped directly from Kunming, and clients can receive them within three days, while they are still fresh," he said.

Li also founded an e-commerce section in February to deal with his new business ventures. "Before the pandemic, my focus was mostly on offline service, such as creating new dishes, but COVID-19 led to me to embrace online activity," he said.

He also plans to provide his clients with seasonal produce from Yunnan throughout the year.

However, due to the outbreak, income from dine-in customers and online sales has fallen by two-thirds, and he has had to apply for a bank loan. 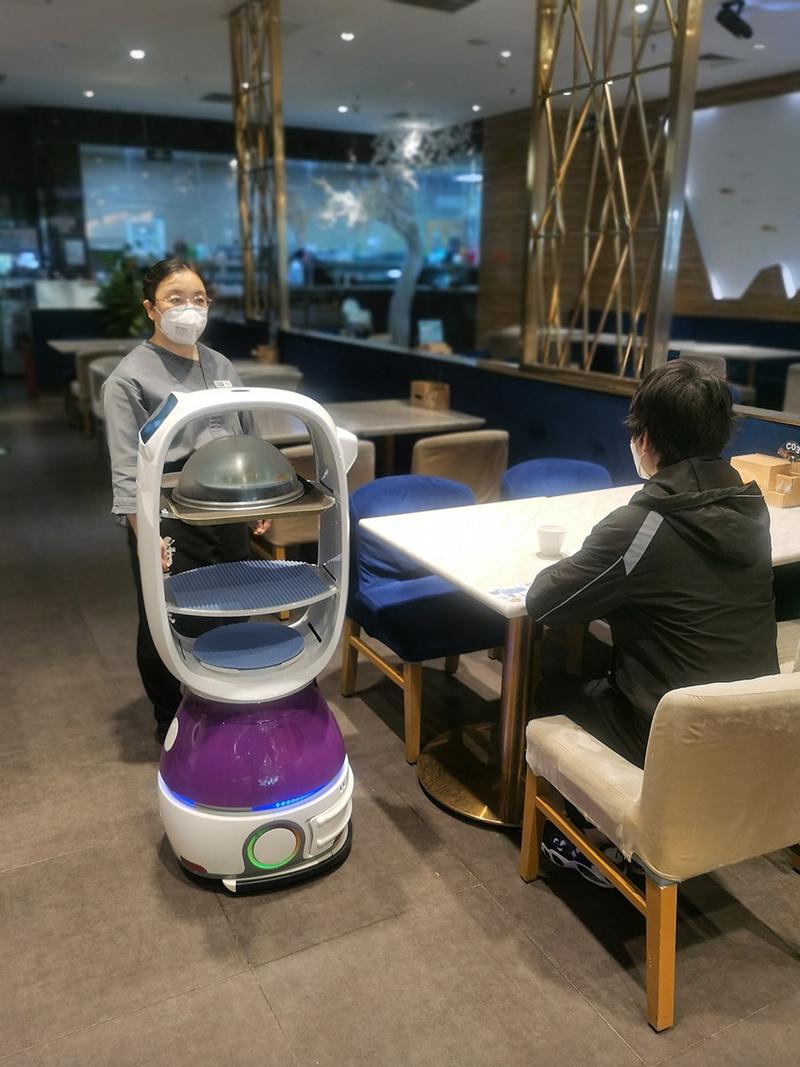 A robot helps serve a customer at Shotamuni, a Japanese restaurant in Beijing. (PHOTO PROVIDED TO CHINA DAILY)

Wang Gang, founder of the Meizhou Dongpo Catering Group, said that from Jan 21 to Jan 30, the group experienced 11,144 cancellations in the 100-plus restaurants it owns nationwide, incurring losses of about 17 million yuan.

The company also has a monthly wage bill of about 50 million yuan and pays rent of 11 million yuan. Wang said that unless the situation eases, it can only survive for another three to six months.

On the second day of Spring Festival, its outlet in Yizhuang, a town in Beijing's Daxing district, began outdoor sales of raw ingredients prepared for Lunar New Year dinners.

Chen Aihong, general manager of the branch, said the vegetable displays have been improved and more produce introduced.

"We also formed a delivery team to take our produce to clients. The team consists of staff members who are not working, as we have few walk-in diners," Chen said.

The team quickly contacted all communities in Yizhuang to set up WeChat groups for residents' orders and supplied them with raw ingredients and semi-cooked products.

"Our staff are taking some additional produce to communities so that when people come to collect their orders, they have more choice," Chen said.

The team delivers boxed meals to employees of the many large companies based in Yizhuang. Orders are also sent to a shuttle bus station so that staff members can collect produce or semi-cooked dishes to take home when they finish work.

Chen has organized livestreaming sessions. She positions her chef in front of a camera, who tells viewers how to cook the restaurant's signature dishes. "It's not only about selling the produce, but also making a connection with our clients," Chen said.

An empty space stands next to the restaurant, where she plans to grow fruit and vegetables, posting updates on livestreaming platforms.

Chen has also sent 30 of her employees to work as "shared staff" for an ice cream factory near the restaurant.

"We don't have sufficient work for them, and the factory doesn't have enough employees returning to work from elsewhere, so it's a win-win solution for both us," Chen said. 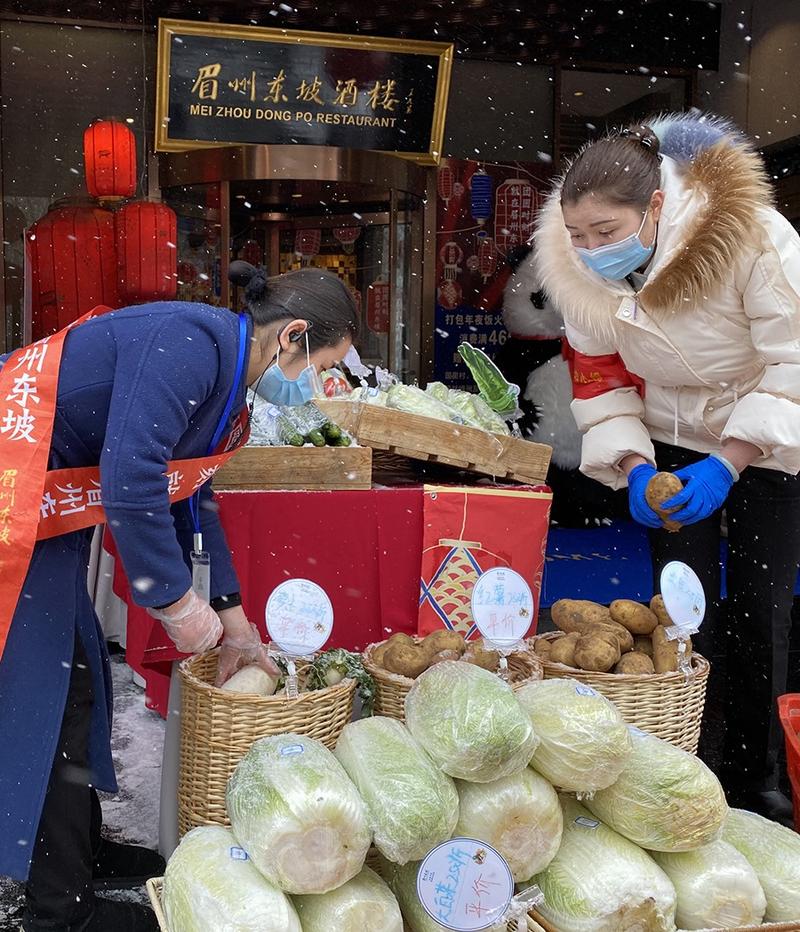 Workers from the Meizhou Dongpo restaurant sell vegetables outside the business. (PHOTO PROVIDED TO CHINA DAILY)

"People have become more interested in cooking for themselves during the pandemic, but occasionally they miss our roast duck," Chen said.

Liu Lingzi, 29, a brand manager in Beijing who used to be too busy to cook, said she has been working from home for two months and this has given her more time in the kitchen.

Last week, she made paella, beef steak and spaghetti with meat paste for her family. She had already bought the half-cooked ingredients, so it only took her 30 minutes to prepare the meal.

"All the ingredients, including seasoning, are included in the package, together with simple step-by-step instructions," Liu said. "They tasted exactly the same as they did in the restaurant (before the pandemic), even though I had never made paella or spaghetti."

Liu said she became tired of ordering takeouts, as she could not see the ingredients. "If I buy ingredients in the supermarket, I usually get more than I need, but with the half-cooked dishes, the amount is exactly right, so I don't waste anything," she said.

Semi-cooked dishes have become something of a tradition for restaurants preparing Spring Festival dinners. More eateries specializing in Chinese cuisine entering this market due to the pandemic have been joined by those featuring Western dishes.

Sun Yuan, founder of the Tiago Catering Group, said the decision to launch semi-cooked dishes was aimed at transferring the dining experience from its restaurants to clients' homes.

"We view it as updating our service, as 80 percent of the cooking is completed in our kitchens, and diners only need to spend 10 minutes preparing the food," he said.

The group sells products through its WeChat account, which has more than 100,000 registered members.

"New customers may not trust this product, but we are targeting members who are familiar with our cuisine," he said.

Sun thinks the pandemic's impact on walk-in diners could last until June, and that as eating habits may change as time passes, the group will need to keep updating online products to meet clients' requirements.

High-end restaurants in Beijing, including those in five-star hotels, are providing takeout meals in fancy packaging amid the pandemic, with some using creative ways to expand their business.

The San Wu Tang Kitchen, a buffet restaurant in Chaoyang district, is selling all its most popular dishes separately.

Hulu by TRB, also in Chaoyang, has launched a wine service, together with meals, while the sommelier at the Opposite House in Sanlitun has started a course on wine tasting.

Saffron, a Western cuisine restaurant in the capital's Wudaoying Hutong, is livestreaming short videos for diners. 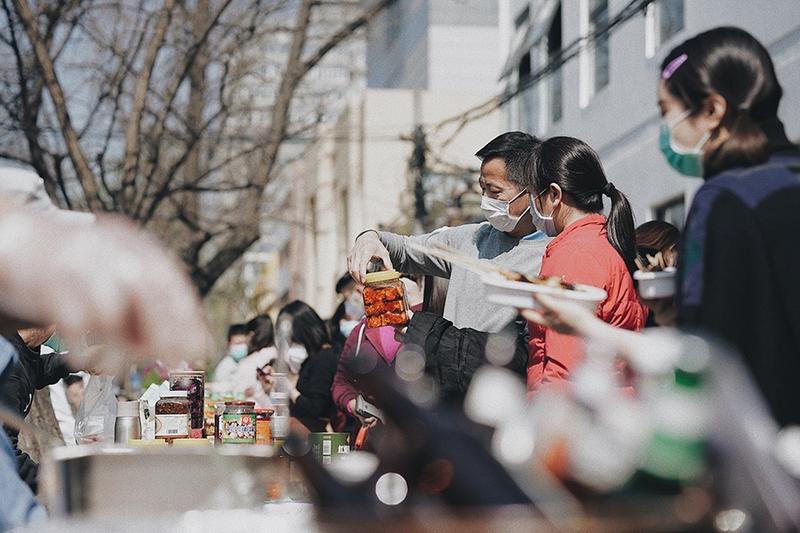 Produce from restaurant owners, florists and vegetable sellers is selected at an outdoor market held every weekend in Beijing's Sanlitun area. (PHOTO PROVIDED TO CHINA DAILY)

Co-founder Li Yang, 41, said the business formed a WeChat group at the beginning of February, sharing its dishes and cookery instruction videos with users. It runs 14 such groups, which have more than 3,000 users.

Li, and her husband, Li Yaoyang, the restaurant's chef, have livestreamed broadcasts, but the frequency of these has fallen from once a day to once a week.

"Livestreaming can shorten the distance between us and our diners, but it's actually quite exhausting to talk for three hours a day. Also, because more people are returning to work, they have less time to watch livestream shows," Li Yang said.

The couple, which owns a total of seven restaurants in Beijing and Beidaihe, Hubei province, offers cookery instructions through short videos.

The pair has incurred losses of 1 million yuan a month during the pandemic. "I have never worked harder than in the past two months, thinking about how to save our restaurants each day and learning new skills," Li Yang said.

Both the Ootoku Changan outlet in the central business district of Beijing, which features kaiseki ryori, a traditional multicourse Japanese meal, and Ootoku Sakabais, a Japanese izakaya in Chaoyang district, have been strongly impacted during the pandemic.

"An izakaya is where friends and colleagues gather together, but with social distancing during the pandemic, people are not venturing out to eat and drink," Liu said.

Meanwhile, he is looking for new opportunities, with many spaces becoming available for rent as some business fail to survive the outbreak.

He has already found a site in downtown Beijing to open a restaurant with the craft beer chain Great Leap Brewing.

"The pandemic has brought restaurant owners closer, as we talk with each other about ways to boost our business. Suddenly, the idea emerged that a combination of Japanese cuisine and craft beer might be a new market opportunity," Liu said.

Shotamuni, in Beijing's Haidian district, which specializes in Japanese cuisine, is operating two robots to help with kitchen deliveries and to take meals to walk-in diners.

The pandemic has also forced some small restaurants to close, with "for rent" signs posted on their doors. Others are doggedly soldiering on.

Wangpopo, or Grandma Wang, which occupies just 40 square meters in Chaoyang district and serves cuisine from Hubei, faces rental payments of 200,000 yuan every three months. However, revenue for the past three months has been only one-tenth of this figure.

Wang Xiaowei, who owns the business, said: "I have many ideas for promoting our restaurant, including running an account on the social media platform Douyin to show how we cook. I need to try these ideas one by one to see if any of them work."

He also plans to promote his mother's signature stew dishes to a wider audience.