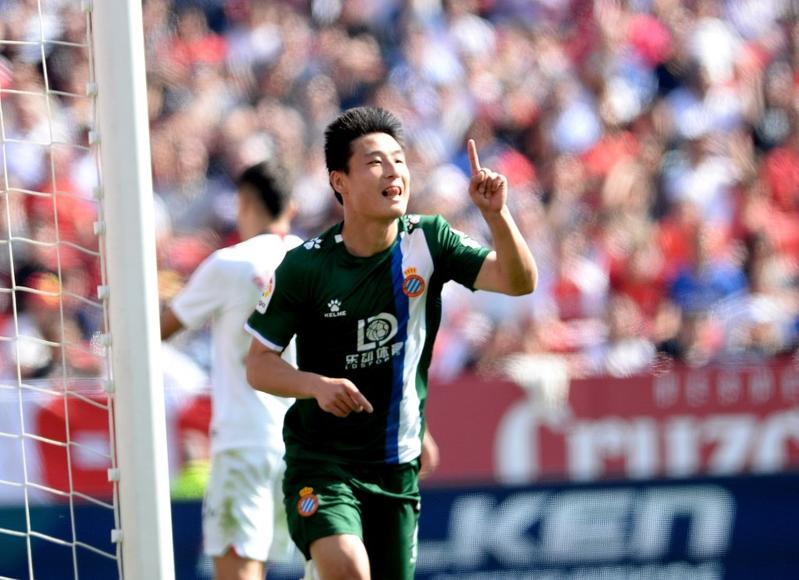 Less than a month after testing positive for COVID-19 in Spain, Chinese star Wu Lei claims he feels recovered from the infection, despite not receiving a second test.

The 28-year-old has been quarantined with his wife, who is also infected, at their Barcelona home since mid-March.

Wu has been sharing regular updates with fans on his situation, with the striker always adopting a reassuring tone. His latest missive was no different.

"I know my health has been a big concern, and now personally speaking, I feel that I have recovered," the Espanyol ace said in a Wednesday blog post.

"However, I haven't received a second test for the coronavirus. There's no hurry and I shouldn't walk beyond my home."

I know my health has been a big concern, and now personally speaking, I feel that I have recovered

Having only displayed mild symptoms, medical experts and the star himself are confident the infection won't harm his future career.

Wu even resumed basic training at home last week, in accordance with a fitness plan devised by Espanyol. The former Shanghai SIPG forward admitted he has found being cooped up at home difficult and is now craving a return to the pitch as soon as possible.

"From this week, I can do normal recovery training at home, including cycling, running and strength training. After a long rest, I feel compelled to resume training. It's hard for me to resist the desire of running and scoring on the pitch, but it's still impossible to go outside."

With the virus still rampant in Spain, it's still not clear when La Liga will end its suspension, so all Wu can do is prepare himself as best he can.

If the season does resume, bottom-of-the-table Espanyol faces a huge fight to avoid relegation, with the Barcelona-based club's task made even tougher by a comparatively high infection toll.

"A selfish plan doesn't serve for anything. But what I want is to play. Despite the fact that in our situation it would be beneficial to say we don't play anymore and Espanyol don't go down. But we all want to play," said Fernandez.

"If we play again, it has to be done with guarantees for everyone. It will not be easy after two months, with the players training at home, because not everyone has a gym or space to do it in the best conditions."

Wu says the squad hold regular online meetings to share their experiences, with cooking skills a popular topic of conversation.

"Because the players have barely had a chance to cook at home before, the team's nutritionist got them to show off their cooking skills. For me, at this special time, I miss so much my home cuisine," said the Nanjing native.

"Since we arrived in Spain, basically it has been my wife who has cooked at home. My job was only to do the dishes. Now actually my wife is still showing more symptoms than me as she still coughs and has a low fever.

"I'm trying to help out with cooking and doing more chores. For someone like me who has been training with teams since I was a kid, it's actually the first time I've done some serious cooking during the quarantine."

Wu revealed Espanyol's Argentine players jumped at the chance to get their barbecues out and show off their country's love of grilled meat. But that didn't go down too well with the nutritionist, who is requiring all players report their bodyweight before breakfast each morning.

Li's men ended a 14-day quarantine on Monday in Sanya, Hainan province, after returning from a training camp in Dubai late last month.

All 25 players tested negative for COVID-19 in Sanya, leaving Wu as the only Chinese international to be infected with the virus.

"Our Team had COVID-19 tests right upon arrival in Sanya, and the results were all negative," Team China said in a social media post earlier this week."We had coronavirus tests again on Sunday before the end of the 14-day quarantine, which showed the same results."