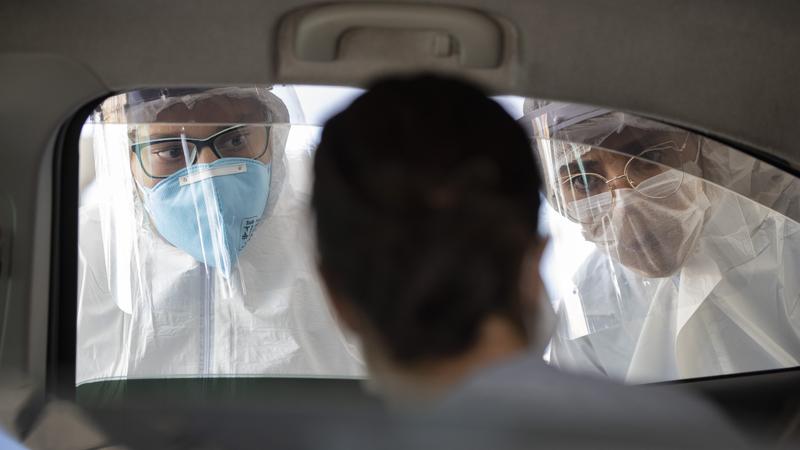 Medical workers wearing protective gear peer into a car checking if commuters have COVID-19 symptoms, in Guarulhos on the outskirts of Sao Paulo, Brazil, March 30, 2020. President Jair Bolsonaro has stuck with his contention that concern about the new coronavirus is overblown, and accused Brazilian media of trying to stoke nationwide hysteria. (ANDRE PENNER / AP)

The need for nations to ditch prejudices and work together to fight a common enemy has become even pressing now that the novel coronavirus turns into a global crisis, say Brazilian scholars in pointing to China as setting a good example.

Ronnie Lins, director of the China-Brazil Center for Research and Business, called for more comprehensive international cooperation in countering COVID-19 and said others can learn from China's experience.

Thanks to the quick and efficient measures that the Chinese government has taken, the flow of contamination has been reduced and it is saving many lives around the world

Ronnie Lins, director of the China-Brazil Center for Research and Business

The professor highlighted some of the measures that China has taken to combat the virus, such as calling off major events to minimize the spread, building extra hospitals to handle more patients, and imposing quarantines on all suspected cases. China can pass on the experience it has gained from these efforts in defeating the virus, Lins said.

"Thanks to the quick and efficient measures that the Chinese government has taken, the flow of contamination has been reduced and it is saving many lives around the world," he said.

However, Lins drew a distinction between those politicians that "carry out actions in favor of the people" and those who are "irresponsible and petty", especially when the latter indulge in discrimination and blame other countries or individuals for their own inadequate responses.

Mauricio Santoro, a professor at the State University of Rio de Janeiro, said China has a lot to offer, especially on how to curb the spread of the virus and with the support it has given to many countries by sending doctors and medical supplies.

China has provided emergency assistance to more than 120 countries and four international and regional organizations. Hundreds of Chinese doctors and experts have either been dispatched to the aid-recipient countries or provided online instructions.

Underscoring the challenges in Brazil, Health Minister Luiz Henrique Mandetta on Tuesday said the country faced a "serious problem" getting enough mechanical ventilators and was seeking reassurance from China on an order for face masks as the number of deaths accelerated.

"We need to bring 40 million masks from China," he said. The country has reported 13,717 infections, including 667 deaths.

Santoro believes the key to ending the virus' spread is to "make countries cooperate and recognize the serious threat of the pandemics". The scholar stressed the importance of creating a sense of global solidarity.

"All human beings are brothers. We stand together in fighting the coronavirus. We get sick and die in the same way, regardless of skin color, religion or nationality," he said.

The virus has infected 1.4 million and claimed more than 82,000 lives around the world, according to a tally from Johns Hopkins University in the United States.

Carvalho said China had a painful experience, but with a successful outcome, making it "an essential ally" in the fight against the outbreak.

"COVID-19 is a global problem, and therefore it is a problem for all countries," he said.

Carvalho also said it was important that people seek out reliable sources of information, saying that misleading reports may confuse people and "get in the way" of the work that governments and experts are trying to do to protect citizens.