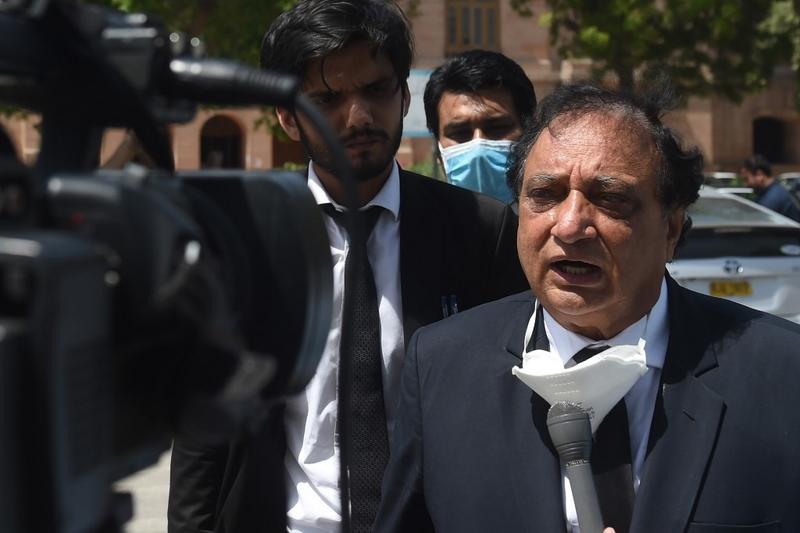 Khawja Naveed (right), defence lawyer of Omar Sheikh, who was convicted to death sentence over the killing of US journalist Daniel Pearl, speaks to media representatives after a court verdict in Karachi on April 2, 2020. (ASIF HASSA / AFP)

KARACHI - Pakistani authorities ordered on Friday four men, including a British militant, convicted of the 2002 murder of US journalist Daniel Pearl, to be detained for three months despite a lower court’s ruling to overturn their convictions.

The High Court in the province of Sindh on Thursday acquitted the four, including Briton Ahmed Omar Saeed Sheikh, who was sentenced to death in 2002 for masterminding Pearl’s murder. The other three were sentenced to life.

The High Court in the province of Sindh on Thursday acquitted the four, including Briton Ahmed Omar Saeed Sheikh, who was sentenced to death in 2002 for masterminding Pearl’s murder. The other three were sentenced to life

Wall Street Journal reporter Pearl, 38, was investigating Islamist militants in the city of Karachi, the capital of Sindh, after the Sept. 11, 2001, attacks on the United States when he was kidnapped in January 2002. He was beheaded weeks later.

The Sindh provincial government’s Home Department issued the order to arrest and detain the four before they were released from prison.

“The government of Sindh has sufficient reason that Ahmed Omar Sheikh and Fahad Nasim Ahmed, Syed Salman Saqib, Sheikh Muhammad Adil be arrested and detained for a period of three months from the date of arrest (April 2, 2020),” a top official of the department said in the order, seen by Reuters.

The official cited concern that the released men may act “against the interest of the country”.

The law to keep them in detention is one that the government has often used to keep high-profile suspects, particularly militants, in custody after being unable to successfully prosecute them in court.

The United States denounced Thursday’s court acquittal of the four, with the top US diplomat for South Asia writing on Twitter that it was “an affront to victims of terrorism everywhere.”

Pakistan joined the US-led “war on terrorism” after the Sept. 11 attacks on the United States but it has been dogged by suspicion that it has for years secretly backed some militant factions as tools in its decades-old confrontation with rival India.

Pakistan denies that but it has been under the close scrutiny of a global watchdog on terror financing, the Financial Action Task Force (FATF), with its frequent inability to prosecute terrorism cases a particular concern of the agency.

The re-arrest of the four gives the government time to put together a legal appeal against their acquittal.

A senior Pakistani government law officer told Reuters that the state would appeal against the Sindh High Court’s Thursday ruling, which the United States welcomed.

“We welcome Pakistan’s decision to appeal the verdict,” acting US Assistant Secretary of State for South and Central Asian Affairs Alice Wells said.

Sheikh was born in Britain and enjoyed a privileged upbringing and studied at the London School of Economics.

He was arrested in India for his involvement in the kidnapping of Western tourists in 1994 as part of his support for Muslim separatists battling Indian security forces in the disputed Kashmir region.

He was one of three men released from an Indian prison after militants hijacked an Indian airliner in late 1999 and flew it to Afghanistan, where the then-ruling Taliban government helped negotiate an exchange.