Cathay Pacific Airways Ltd. said it will cut capacity even further as travel demand has disappeared because of the coronavirus.

The Hong Kong-based airline will fly just two times a week to four long-haul destinations -- London, Vancouver, Los Angeles and Sydney -- and hopes to maintain three weekly services to eight regional destinations, including Tokyo, New Delhi and Singapore, Chief Executive Officer Augustus Tang said in a memo to staff. Chairman Patrick Healy and Tang are taking a 30 percent pay cut from April to December and executive director salaries will be reduced by 25 percent.

“Our passenger fleet has been virtually grounded as the remaining demand has disappeared,” Tang said in the memo, the authenticity of which was confirmed by a company representative. “Passenger capacity will now be reduced further from the skeleton schedule previously announced.” 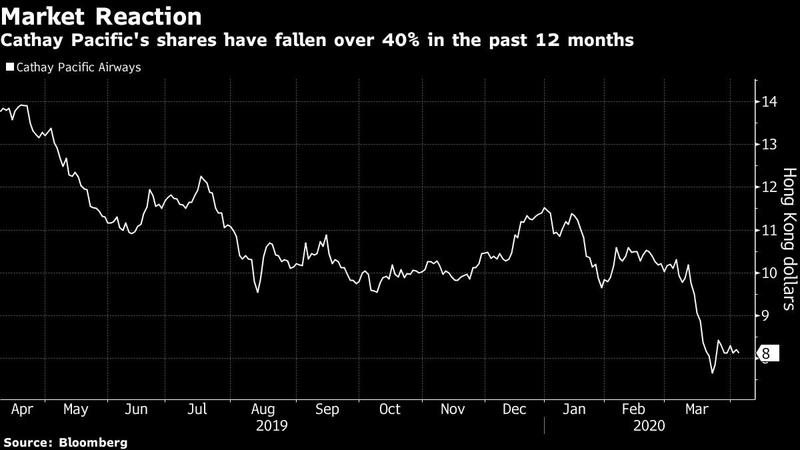 The airline and its Cathay Dragon unit are reducing capacity by 97 percent across their passenger networks this month, with Cathay Dragon operating three flights a week to Beijing, Shanghai and Kuala Lumpur, according to a statement on the carrier’s website. The virus has now infected more than 1 million people worldwide and killed over 53,000.

Tang said Cathay carried only 582 customers on one day this week with a load factor of just 18.3 percent, when on average it would carry about 100,000 people.

Cathay’s shares, which are down nearly 30 percent this year, slipped 0.1 percent on Friday.

Cathay made an unaudited loss of more than HK$2 billion in February alone due to disruption from the coronavirus, which followed an already damaging period as passenger numbers had dropped off sharply in the latter part of 2019 amid anti-government protests in Hong Kong. Cathay has asked staff to take unpaid leave and warned of a substantial loss in the first half this year.

“A timeline for a recovery in our customer demand still remains impossible to predict,” Tang said. “We continue to discuss with our business partners and suppliers how we can reduce our cash expenditure and preserve our cash for the months ahead.”

Sydney-based CAPA Centre for Aviation last month warned that most carriers will go bankrupt by the end of May without government support, while the International Air Transport Association said the world’s airlines could lose a quarter of a trillion dollars in revenue this year as travel comes to a standstill.
LIVE BLOG
By Thursday, January 01, 1970, 08:00