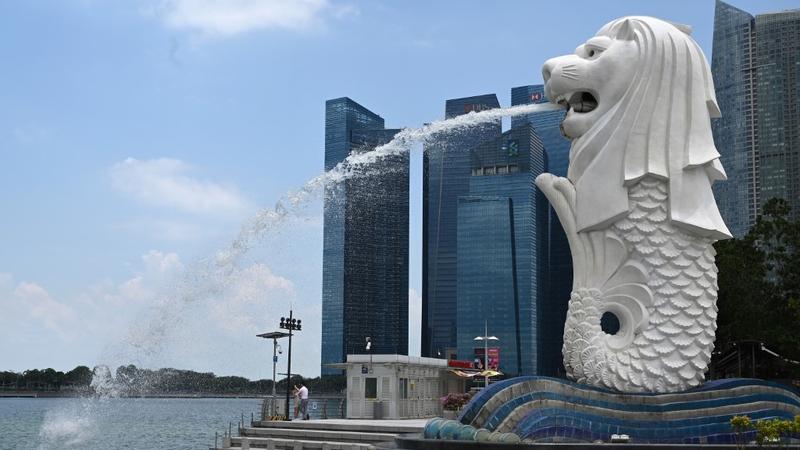 The Merlion statue is seen in Singapore on April 2, 2020, as the government slowly tightens restrictions to combat the spread of the COVID-19 novel coronavirus. (ROSLAN RAHMAN / AFP)

SINGAPORE - Held up as a role model for its battle against coronavirus, city-state Singapore is struggling with an infection spread that disease experts say bodes ill for global containment efforts.

The tiny Southeast Asian nation was one of the worst hit countries when the virus first spread from China in January, but a strict surveillance and quarantine regime helped stem the tide, with methods that drew praise from the World Health Organisation.

As the virus later formed new hotspots in Europe and the United States, infecting nearly one million people globally, the trading and travel hub closed its borders.

Guarding against the virus in Singapore is easier than in most places. The island of 5.7 million people takes less than an hour to drive across, has a handful of international entry points and a strong healthcare system.

Singapore’s approach has been by far one of the very best. What they are really showing the rest of the world is that this is just a difficult virus to beat back and keep down

So far only four people have died, but the city-state’s containment measures are showing signs of strain.

On Wednesday, Singapore reported its biggest daily jump in coronavirus cases, up 74 to 1,000 infections.

More than 70 percent of those were domestic as opposed to imported, and many were unlinked to previous cases, a gauge of how far the disease is spreading in the community.

Experts say the breaches of Singapore’s defences show how difficult it will be to curb the coronavirus spread elsewhere.

“Singapore’s approach has been by far one of the very best,” said Michael Osterholm, an infectious disease expert at the University of Minnesota.

“What they are really showing the rest of the world is that this is just a difficult virus to beat back and keep down.”

Singapore's domestic cases have doubled over the last week alone, while its total infections have increased nearly tenfold in the last month.

“We should be mindful of what we do and where we go now,” said Irving Chung, a 43-year old compliance manager, describing Wednesday’s record case numbers as “worrying”.

Singapore’s top medical authority Kenneth Mak said this week that the rising caseload was “cause for concern” and that they would closely monitor the trend over the coming weeks to assess whether intensified prevention measures were working.

China's Taiwan has also recently seen a rise in imported cases and pockets of local outbreaks with no obvious source of infection that have made authorities anxious.

Meanwhile in Chinese mainland, where draconian containment measures have helped curtail domestic transmission of the virus, officials have turned attention to intercepting an influx of “imported” cases from Chinese returning from abroad and paying closer attention to the potential for asymptomatic carriers to fuel a second wave of outbreaks as curbs on movement are eased.

The WHO has previously praised Singapore for “leaving no stone unturned” in efforts to trace potential carriers, and said the country had shown how the disease can be held back without resorting to strict lockdowns now common around the globe.

Asked about Singapore’s rising cases, the WHO’s representative in the region said on Thursday that the city-state and others needed to do more.

“The virus never sleeps, and it is highly infectious. Intensification of control efforts are needed around the globe, including in Singapore,” said Ying-Ru Lo, Head of Mission and WHO Representative to Malaysia, Brunei Darussalam and Singapore.

Singapore has said a total lockdown will not eradicate the virus and any measures put in place have to be sustainable in an outbreak that could last for many months.

“There is no such magic solution,” said Lawrence Wong, co-head of the government’s virus-fighting taskforce.

But some local disease experts say the trends show tougher measures - such as closing schools and offices - may be needed.

“Very frankly, I am worried, because we do see an increasing number of unlinked cases...and that is a sign that there are sporadic transmissions in the community that we are unable to get a handle on,” said Teo Yik Ying, dean of the Saw Swee Hock School of Public Health at the National University of Singapore.