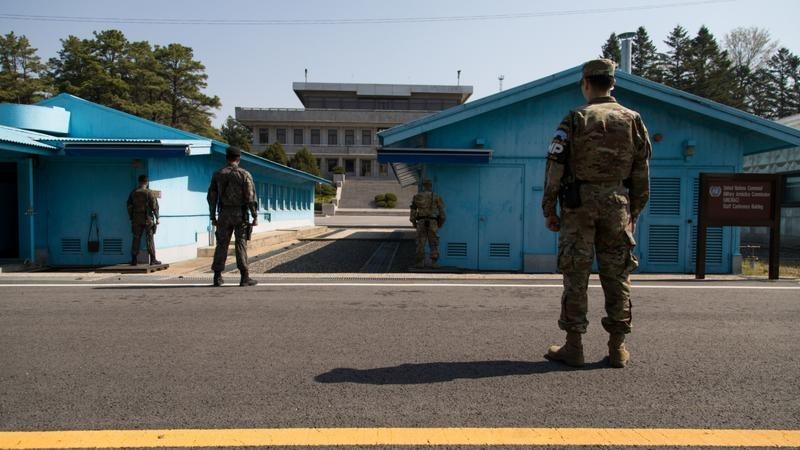 In this April 18, 2018 file photo, the Republic of Korea's and US soldiers stand guard next to United Nations Command Military Armistice Commission (UNCMAC) conference buildings at the truce village of Panmunjom in the Demilitarized Zone (DMZ) in Paju, the ROK. (SEONG-JOON CHO / BLOOMBERG)

The US and South Korea have tentatively reached a military cost-sharing agreement, the Yonhap News Agency reported, potentially ending months of bickering over the Trump administration’s demands for a massive increase.

The seven-decades-old military alliance was dealt a blow Wednesday when the US military put almost half of its 8,500 South Korean civilian workers on furlough due to the funding dispute

The announcement could come as early as Wednesday, the Seoul-based news service reported, citing a South Korean government official it didn’t identify. The two sides agreed to sign a multiple-year contract rather than another stopgap one-year deal, it said.

The seven-decades-old military alliance was dealt a blow Wednesday when the US military put almost half of its 8,500 South Korean civilian workers on furlough due to the funding dispute. General Robert Abrams, commander of US Forces Korea, called the furloughs “heartbreaking” and “unfortunate,” saying in a statement the move was “not what we envisioned or hoped what would happen.”

The furlough unsettled operations at military facilities in South Korea, where about 28,000 US service personnel are stationed.

The two sides are putting the finishing touches on the deal, the person told Yonhap on the condition of anonymity, adding various possibilities still remained open. The report did not mention how the two sides bridged a gap after President Donald Trump asked for as much as a five-fold increase and South Korea showed no signs of paying anywhere near that much.

South Korea’s foreign ministry and the US State Department declined to comment on the Yonhap report.

The two sides have been deadlocked over what’s known as the Special Measures Agreement, with Trump initially demanding about US$5 billion a year from South Korea to pay for US security. South Korean President Moon Jae-in’s administration has indicated that it wouldn’t pay much more than the almost US$1 billion it agreed to in a one-year deal in 2019.

The tensions over funding comes as the US military struggles to keep coronavirus outbreaks from disrupting operations in South Korea and elsewhere and the allies watch for fresh provocations from the DPRK's leader Kim Jong Un.

ALSO READ: Korean workers at US base on furlough as cost sharing talks fail

While the US and South Korea have been bargaining, the DPRK has been busy testing new types of solid-fuel, nuclear-capable ballistic missiles designed to strike anywhere on the peninsula and evade US interceptors. It has fired off nine in March alone, a record for a month.

Negotiators from the US and South Korea met in March in Los Angeles but a wide gap remained between the two sides, according to a State Department spokesman who asked not to be identified discussing private deliberations.

Trump has repeatedly insisted that the US gets a raw deal from partners who host American troops around the world, and he’s focused particular ire on the South Korean agreement. US Defense Secretary Mark Esper told his counterpart, Defense Minister Jeong Kyeong-doo, in February that “as a global economic powerhouse and an equal partner in the preservation of peace on the peninsula, South Korea can and should contribute more to its defense.”

South Korea’s National Assembly must sign off on any deal and Trump’s demands have brought about a rare moment of unity from progressives and conservatives in the country who see them as unreasonable. With parliamentary elections set for April 15, siding with Washington could lead to defeat at the ballot box.

The negotiations in South Korea could affect other US allies hosting troops, such as Japan, with Esper saying the Trump administration wants them to pay more, too. Japanese officials are watching the South Korea negotiations closely with the approach of talks set to begin later this year for a US-Japan cost-sharing deal.