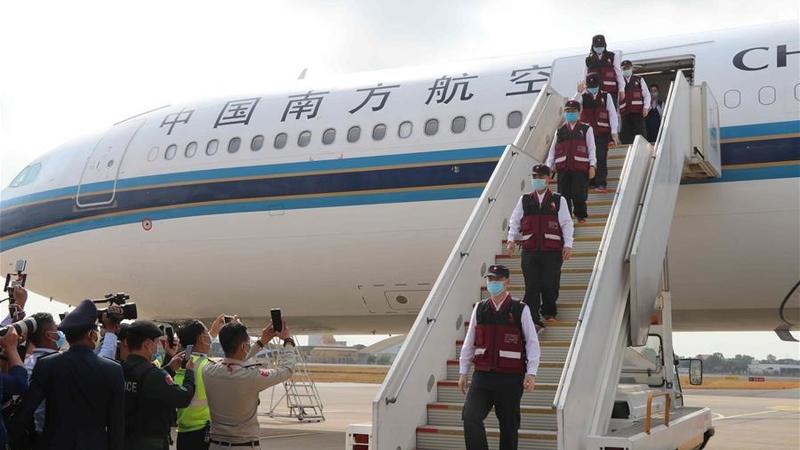 The Chinese government has provided aid to 89 countries and four international organizations to battle the novel coronavirus pneumonia outbreak and is planning further support, a senior official said on Thursday.

Deng Boqing, vice-chairman of the China International Development Cooperation Agency, said the 89 countries are in Asia, Europe, Africa, the Americas and the South Pacific.

It is China's responsibility to support the international community in tackling the outbreak, and such support helps lower the risk of the virus coming across the border to the nation, Deng Boqing, vice-chairman of the China International Development Cooperation Agency, said

He spoke at a briefing held by the State Council Information Office, adding that the aid was in medical supplies and technical assistance. The supplies include test kits, face masks, protective clothing, goggles, forehead thermometers and ventilators, while the assistance is offered mainly by medical experts sent to other countries, Deng said.

China has sent medical experts to Iran, Iraq, Italy, Serbia and Cambodia to help them fight the virus.

It is China's responsibility to support the international community in tackling the outbreak, and such support helps lower the risk of the virus coming across the border to the nation, which is threatened by imported cases and sporadic local cases, Deng said.

The outbreak's severity and a request for support from China are among the factors China considers when making aid plans, which are determined after discussion with recipient countries, he said.

China has worked within its ability to provide the aid while ensuring that its domestic needs for medical resources are met in the first place, Deng said.

Another important part of China's contribution to the global battle is sharing its experience. Zeng Yixin, deputy director of the National Health Commission, said the commission has compiled an up-to-date version of diagnosis and treatment plans, as well as other technical documents, and shared them with 180 countries and more than 10 international and regional organizations.

The methods and techniques China devised to control the disease are "invaluable", Zeng said.

READ MORE: WHO expert: China has taught us lessons

The commission has also conducted in-depth exchanges with the international community, he said, adding that it has held about 30 videoconferences on technical issues with over 100 countries and regions.

On March 12, the commission and the World Health Organization held a videoconference to share China's experience with representatives from 77 countries and seven international organizations who attended. It was viewed by over 100,000 people online, Zeng said.

Chinese firms also are working with counterparts in the United States, Germany and the United Kingdom to develop other types of vaccines for the novel coronavirus, Xu said. The best results come through joint research and the sharing of achievements, he said.