By Ma Zhenhuan in Hangzhou 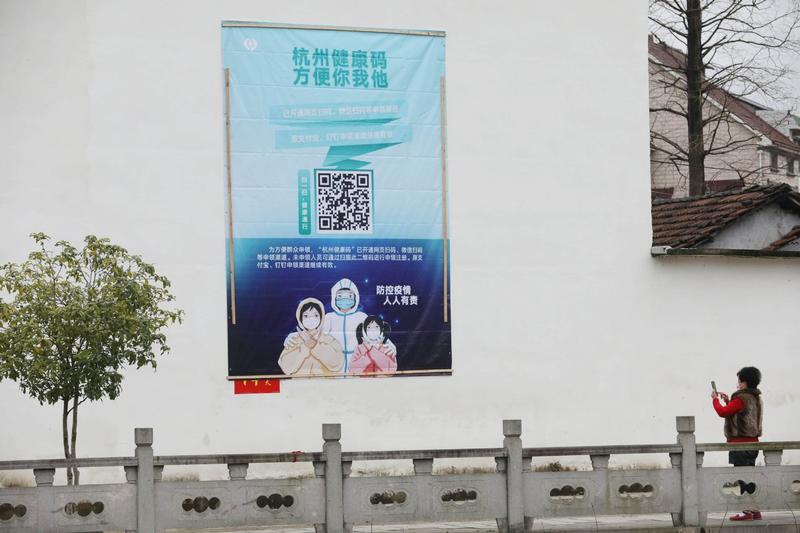 A resident scans the QR code on a poster to register her personal health QR code in Hangzhou, East China's Zhejiang province, on Feb 15, 2020. (PHOTO / XINHUA)

The health QR code system launched in Hangzhou, Zhejiang province, in early February to curb the spread of the coronavirus now has an international edition targeting overseas Chinese returning to Zhejiang, as well as foreign students and foreigners residing in the province, to tighten control over imported cases.

Data from the Health Commission of Zhejiang revealed that by Monday there had been 15 imported cases of the infection in the province.

Chen Guangsheng, executive deputy director of the province's leading group for the prevention and control of the novel coronavirus, noted that the international health codes are categorized by orange, yellow or green according to the health and travel information applicants give.

Chen said that the battle against imported infections has become the top priority for prevention and control of the virus in Zhejiang.

"The health code system is an effective and precise tool to help control the virus from spreading," said the official, adding that the launch of the international edition was a response to the rising number of imported novel coronavirus infections.

By noon Monday, 31,000 international health QR codes had been granted throughout Zhejiang.

"My mother reported my return to the community several days ago, and I applied for my health code online," Bao said. "I filled out a form on the plane and reported my health condition and travel history to the staff at the airport.

"I came back from the United States and was categorized by the color yellow when quarantined in Shanghai, so I was asked to self-isolate at home in Hangzhou for at least 14 days," she added.

She recalled that the whole inspection and quarantine process at the Shanghai airport took about six hours before she was transported to Hangzhou by the local center for disease control and prevention.

During the journey back to Hangzhou, Bao said she was not required to show her health code.

Some people in other countries and regions who plan to return to Zhejiang asked on Weibo where they could apply for the health codes.

Ningbo, a port city in Zhejiang, adopted a similar code system to evaluate and track the health conditions of ship crews coming to its ports.

Based on data about a ship's routes and ports of call, an online platform will automatically categorize them before crews arrive.

If a ship stopped at a port in a country hit hard by the virus, it will be marked red and there will be stricter inspection and quarantine measures, according to the Ningbo Maritime Safety Administration.

Du Weijie, a staff member at the Ningbo Pilot Station, said that the "health codes" for ships greatly reduce their burden because they are able to get the information in advance and have time to prepare.

Qin Jirong contributed to this story.