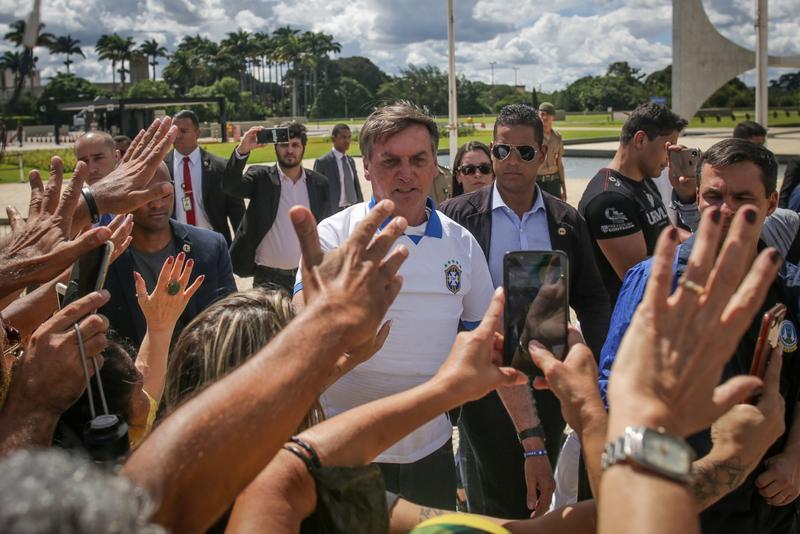 Jair Bolsonaro, Brazil’s president, center, greets supporters during a demonstration outside of the Planalto Palace in Brasilia, Brazil on March 15, 2020. (PHOTO / BLOOMBERG)

The leaders of Brazil and Mexico are embarking on a political gamble that could not only exacerbate the coronavirus crisis in Latin America’s two largest economies, but also bring them great personal cost.

Jair Bolsonaro and Andres Manuel Lopez Obrador stand on opposite sides of the political spectrum, but both have assumed a relatively relaxed approach to the crisis, resisting calls to curb travel or to encourage social distancing. Instead, and perhaps to uphold the “man of the people” narrative that got them elected, they spent the past few days greeting and shaking hands with supporters, sending out a message that’s at odds with the recommendations of their own health ministers.

These are two presidents with different ideologies, but they both have come into power by criticizing establishment politics

Bolsonaro, 64, caused outrage in political and medical circles on Sunday when he attended anti-Congress demonstrations in Brasilia that, just a few days earlier, he had suggested should be canceled due to the risk of coronavirus. Pictures and footage of the event show the president greeting his supporters, fist-bumping them and holding their mobile phones out for selfies.

The Brazilian leader was supposed to be in quarantine after at least 12 people who accompanied him on a trip to the US — which included a dinner with President Donald Trump at Mar-a-Lago on March 7 — tested positive for coronavirus. Bolsonaro has said he tested negative but is expected to undergo additional testing over the next few days. It’s unclear whether the Brazilians were infected before going to the US or whether they picked up the virus there.

Likewise, Lopez Obrador, 66, has continued kissing hundreds of people on the cheek during public events, and has refused to cancel scheduled trips and tours. The president, known as AMLO, has said his government’s health officials will tell him if and when he should stop. Over the weekend, he continued sharing pictures on social media of crowded events he attended.

“These are two presidents with different ideologies, but they both have come into power by criticizing establishment politics,” said Mauricio Santoro, professor of political science at the State University of Rio de Janeiro. “This leads to a posture that is against experts, and sometimes against their own health advice.”

That’s a risky strategy for Bolsonaro and AMLO, both more susceptible to a viral infection due to their age. Bolsonaro, in particular, has undergone a series of surgeries since being stabbed on the campaign trail in 2018. It’s also a dangerous strategy for their countries, which seem to be lagging in their response to the crisis.

As of March 16, Brazil has announced no travel restrictions or border closings, and everyday life in the country continues much as it would have pre-virus, with packed beaches, buzzing bars. In the absence of an aggressive federal response to the outbreak, state governments have taken the baton and called for some local restrictions. On Monday some Brazilian political leaders called for Bolsonaro’s ouster, for having committed “a crime against public health.”

In Mexico, the federal government has called for some restrictions, such as suspending some events and closing schools, and has encouraged caring for elderly people. Yet the government also has not moved to restrict visitors from certain countries. And over the weekend, the huge Vive Latino music festival took place in Mexico City as scheduled.

“In both cases, I don’t think this is part of a sophisticated political strategy,” Santoro said. “I think they truly don’t believe in the severity of the pandemic. This is more about the temperament and personality of both of them, they don’t think this is a serious problem.”

By contrast, other Latin American leaders have adopted much more aggressive policies against the pandemic.

Even Venezuela’s Nicolas Maduro appeared to be seizing the crisis as an opportunity to demonstrate a strong-handed approach, ordering a quarantine in Caracas and six other states.

“Either we quarantine or the pandemic could tragically and painfully take down Venezuela,” he said on state television, adding that “we should not leave our houses, except to cover essential needs.”

Venezuela has only reported 17 confirmed cases so far, but there’s concern that its health system would be ill-prepared for an extensive outbreak.

Argentina’s President Alberto Fernandez has also taken strong measures against the virus, stopping all people coming into the country and closing schools until the end of the month. He has said a “total lock-down” is on the table.

President Sebastian Pinera said Monday Chile would close all of its borders to foreigners on Wednesday. Ecuador has already done so, while also banning all public activities. In Peru, President Martin Vizcarra said Peruvians will only be allowed to leave their homes for basic necessities such as buying food and medicine or seeing a doctor.