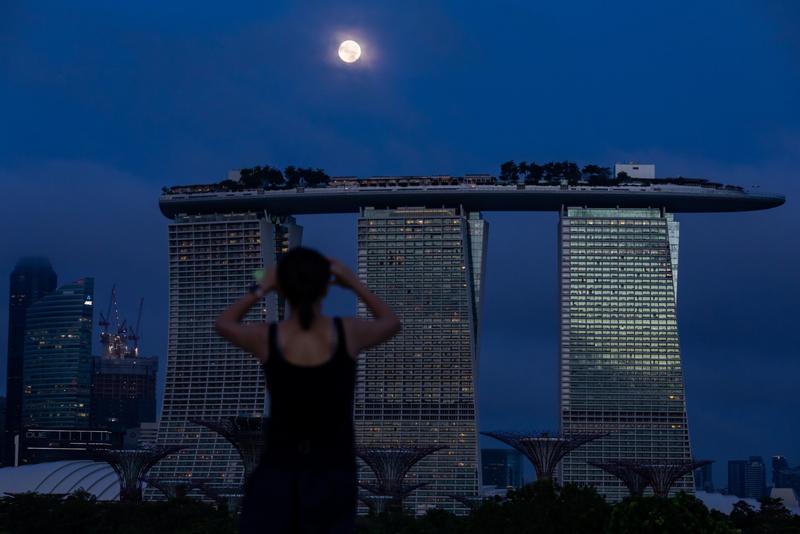 A person with a smartphone takes a photograph of the Marina Bay Sands hotel and casino, right, and buildings in the central business district in Singapore, on Feb. 10, 2020. (PHOTO / BLOOMBERG)

Singapore’s government moved to assure residents it won’t run out of food or basic necessities, after neighboring Malaysia said it would halt travel abroad.

The city-state’s residents “may have to make some adjustments to our choices in the short term,” however the country has “sufficient food supplies for all Singaporeans as long as all of us buy responsibly,” Minister for Trade and Industry Chan Chun Sing said in a Facebook post.

Some 300,000 people a day cross by land between Malaysia and Singapore, supplying the wealthy city-state with food, supplies and workers

Later in the day, Singapore Prime Minister Lee Hsien Loong said in a separate Facebook post Malaysia has assured Singapore that the flow of goods and cargo, including food supplies, between both countries will continue. Both countries appointed senior ministers to coordinate responses to the coronavirus outbreak, Lee said.

The comments came after Malaysia banned residents from traveling overseas and instituted a mandatory 14-day self-quarantine for those returning home in a bid to limit the coronavirus outbreak. Some 300,000 people a day cross by land between Malaysia and Singapore, supplying the wealthy city-state with food, supplies and workers.

The restrictions will hurt Singapore’s economic growth, which is already taking a knock from the virus. Economists at Maybank now see Singapore’s gross domestic product contracting by 0.3% in 2020, with potential to slash further if Malaysia’s shutdown takes a heavier toll than expected on the city state’s economy.

READ MORE: Singapore mulls first use of reserves since 2009 amid virus

Malaysia’s move sparked a rush for groceries and basic necessities in Singapore as people raced to stock up, fearing shortages. 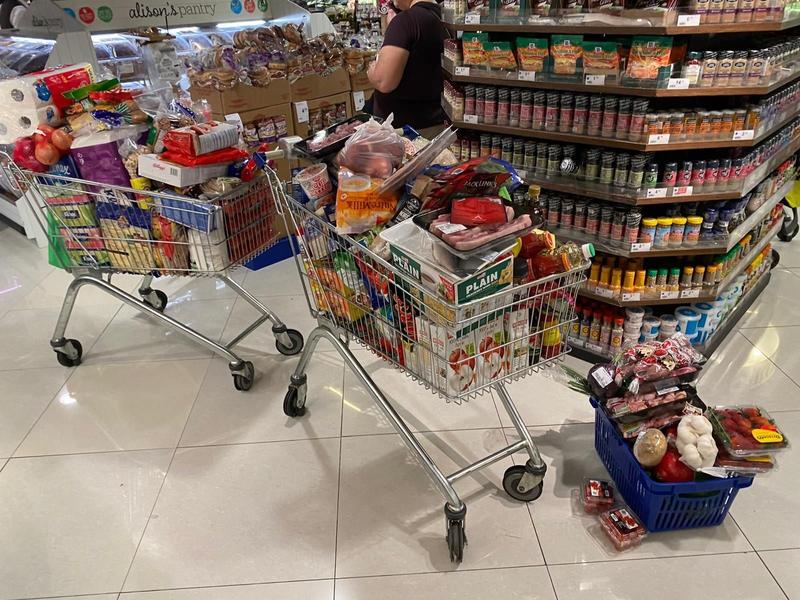 People rush to a supermarket to stock up on supplies in Singapore, March 17. (PHOTO / BLOOMBERG)

The queue for fish stretched to an hour at the Haig Road market near Paya Lebar, while at Mustafa Centre in Little India, several shoppers struggled to push two trolleys each as people stocked rice and wheat flour. Toilet paper and meat had vanished from a Bedok store, while vegetables were almost all bought up from shops in Serangoon and along Holland Road.

Redmart, the grocery delivery unit of Lazada in Singapore, has no delivery slots remaining through Friday and isn’t taking bookings for deliveries beyond that. Amazon.com Inc.’s local Prime Now app says delivery windows are “sold out,” citing high demand. “Check back soon,” the banner across the top of the site says.

Chan, the trade minister, assured Singaporeans that the government has been preparing contingencies for a disruption in food supplies from Malaysia for many years, and put in place “robust plans” to manage this scenario, and will ensure Singaporeans never run out of food or essential supplies.

Singapore is combining stockpiling and local production to buy time to bring in alternative supplies should usual supply lines be disrupted, Chan said. For carbohydrates such as rice and noodles, the country has more than three months’ worth of stockpile at the national level. For proteins such as meat and vegetables, the country has more than two months’ worth of supplies at normal consumption patterns. The government is activating air freight options to substitute some Malaysian supplies, such as eggs, he said.

Yet panic buyers had already begun to descend on the Market Place supermarket in Orchard Tuesday morning, where lines were much longer than usual -- though not as crazy as at the start of the virus scare weeks ago when Singapore, briefly, had the second-most confirmed cases in the world.

Dale Summerville, a longtime Singapore resident, said he and his wife decided to stock up with two weeks’ supply of food instead of one partly due to the border closing. Hisa, a Japanese national living in Singapore who asked that his last name not be published, said the Malaysian decision worried him that Singapore could run out of essentials.

“I heard that there could be supply chain problems with the border between Malaysia and Singapore, so I decided to come and buy some toilet paper,” Hisa said. “I heard that they may be running out at other stores, so I came today.”

The plea from Communications Minister S. Iswaran was direct.

“While we are not facing any shortages, please do not hoard, and purchase only what you need. Otherwise, no stockpile will be sufficient.”