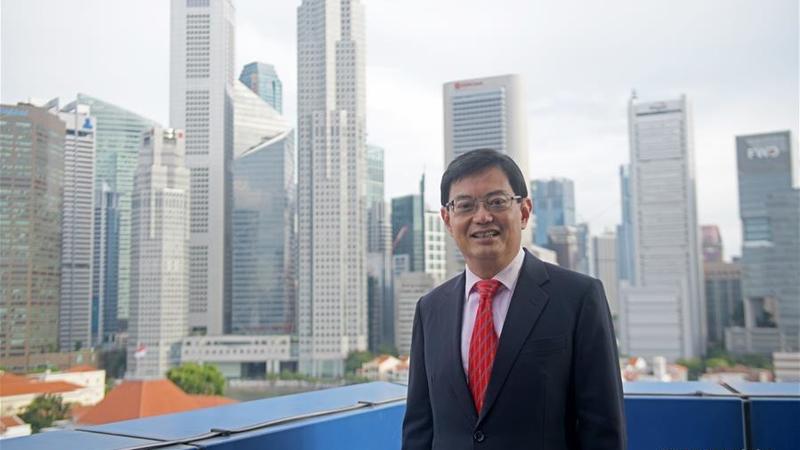 Singapore's Deputy Prime Minister and Finance Minister Heng Swee Keat poses for a photo against a backdrop of skyscrapers in Singapore, May 17, 2019. In his annual budget speech on Feb 18, 2020, Heng unveiled financial packages worth around US$4.5 billion. (THEN CHIH WEY / XINHUA)

SINGAPORE - Singapore on Tuesday announced financial packages worth around US$4.5 billion to help contain the coronavirus outbreak in the city-state and weather its economic impact.

Delivering his annual budget speech, Finance Minister Heng Swee Keat also said a planned hike in the goods and services tax would not take place in 2021 given the current state of the economy which recorded its lowest growth in a decade last year.

A planned hike in the goods and services tax would not take place in 2021 given the current state of the economy, said Finance Minister Heng Swee Keat

Singapore has already cut its 2020 growth forecasts due to an expected economic blow from the coronavirus outbreak and has flagged the chance of a recession this year.

“Just as the global economy was beginning to recover, the coronavirus...outbreak hit us,” said Heng. “The outbreak will certainly impact our economy...Our first concern is to protect you and your families.”

The schemes involve an S$800 million (US$575 million) package to fight and contain the disease - which the World Health Organization has named as COVID-19 - mainly through additional healthcare funding, and a further S$5.6 billion in measures to help manage its impact on businesses, jobs and living costs.

The economic packages include support for businesses to manage wage bills, corporate income tax rebates, schemes to help firms in the hard-hit tourism and aviation sectors and cash payouts for households to manage expenses in uncertain times.

The Southeast Asian city-state has reported 77 cases of the virus to date, one of the highest tallies outside China where it has claimed nearly 1,900 lives. The global business and transit hub was also one of the worst hit countries outside of China during the 2003 Severe Acute Respiratory Syndrome outbreak.

“The impact of COVID-19 is probably going to be bigger than SARS because China was relatively less important to Singapore’s exports and tourism,” said Lee Ju Ye, an economist at Maybank.

“Now, it’s hitting the global supply chain and Singapore’s manufacturers are going to feel the heat.”

In other highlights, Singapore - which is due to hold an election by early 20201 - said it was allocating S$8.3 billion over the next three years to help it develop into a global hub for technology firms.