Recovery wish lists being drawn up

Public eager to dine out, travel and make merry

Liang Qun's dream came true at the end of last month, but not in quite the way the doctor was expecting.

On Feb 26, Taiwan pop singer Jam Hsiao livestreamed a heart-wrenching rendition of his song Take Care to offer encouragement to medical workers at the front-line of the battle against the novel coronavirus pneumonia outbreak.

While watching a concert staged by the artist on the video-sharing platform Kuaishou, Liang, a doctor at Wuhan No 7 Hospital in Hubei province, the former epicenter of the contagion, could not hold back her tears.

She said attending a concert staged by Hsiao is at the top of her wish list for when the outbreak is brought under control, adding that she feels "empowered" by his songs.

It was the first time in two months that the doctor had taken a break from work. 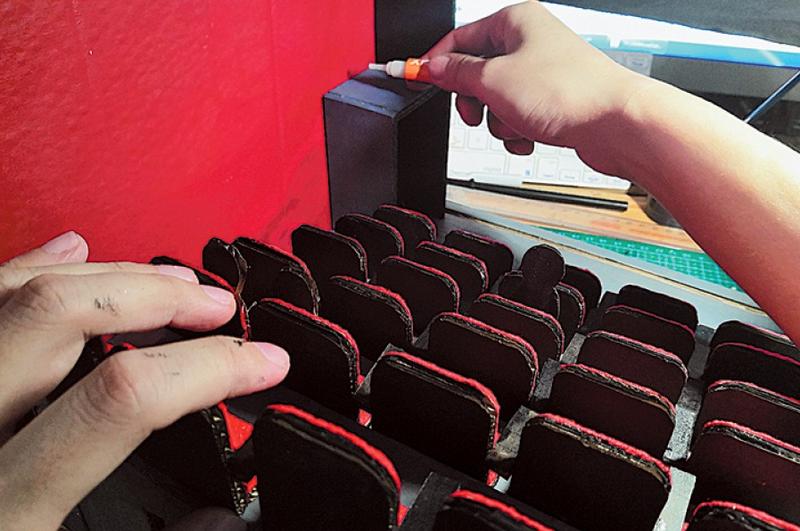 Leng Yang, who is eagerly waiting for movie theaters to reopen, makes a mini-cinema at home from cardboard and used clothes. (PHOTO PROVIDED TO CHINA DAILY)

Liang told Hsiao in a post on Sina Weibo: "I felt so happy watching the online concert, as I hope to go to one of your performances when the epidemic is contained. Everything (in Wuhan) is changing for the better."

At the end of last month, respiratory expert Zhong Nanshan said the disease was likely to be contained on the Chinese mainland by the end of April.

Many people have posted their hopes for activities after the outbreak, with the hashtag "The wishlist after COVID-19" being viewed nearly 80 million times on Weibo as of Feb 28.

Tired with sitting at home all day with no offline social activities, people nationwide can't wait for life to return to normal.

Most restaurants, gymnasiums, cinemas, tourist sites and other businesses have been closed nationwide and sports and cultural events have either been canceled or postponed.

A Peking University research study, published on the website of Guangming Daily, estimated that direct losses to the cultural sector from the outbreak could reach more than 1.25 trillion yuan (US$180 billion) before June. 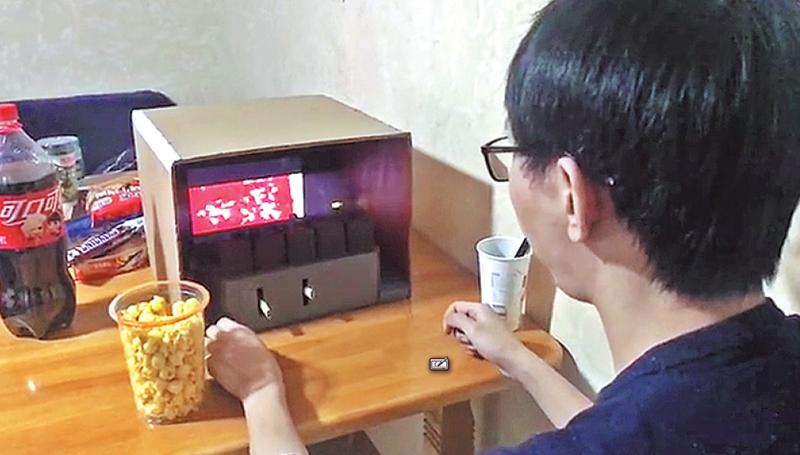 Leng Yang, who is eagerly waiting for movie theaters to reopen, makes a mini-cinema at home from cardboard and used clothes. (PHOTO PROVIDED TO CHINA DAILY)

Leng Yang, who works in Qingdao, Shandong province, is eagerly waiting for movie houses to reopen. To pass the time, the 30-year-old graphic designer made a mini-cinema from cardboard and used clothes at home in just one day.

A clip he posted on the video-sharing site Douyin showed the makeshift theater with tiny seats and stairs. Leng used his phone as a screen, with Lost in Russia showing.

He said: "I haven't been to the cinema for more than two months due to the outbreak. I really miss it," adding that if he is unable to do so soon, he may even consider making a miniature version of Universal Studios.

On Feb 26, a guideline was issued in Beijing for movie theaters to resume business, but it is still not known when they will reopen. The guideline requires audience members to sit at least 1 meter apart, meaning that tickets can only be sold for alternate rows and seats.

Many movie fans have switched to video sites, with data from the entertainment platform Enlighten showing the number of online views for films from Jan 25 to Feb 8 reached 853 million, compared with 389 million in the same period last year.

Visiting the cinema is the fourth-most-popular activity for when the disease has gone. Going to restaurants is the top choice, followed by visits to hair salons and attending parties, according to data analytics company Civiw. Going to the gym, traveling and concerts are also high on people's wish lists. 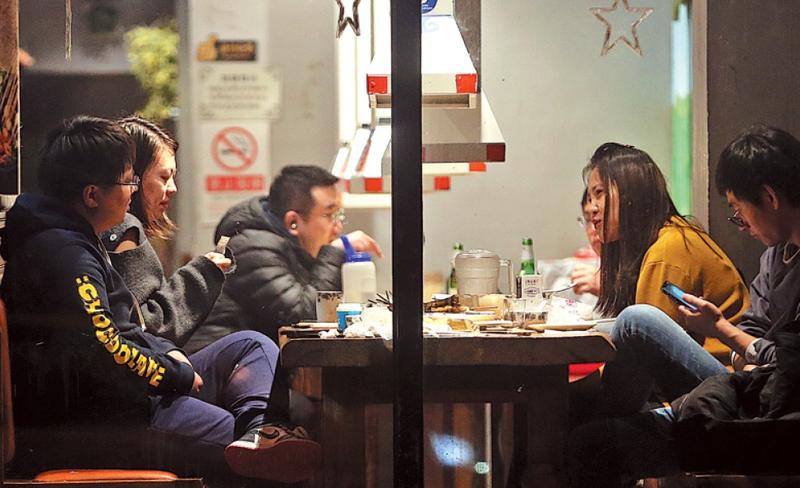 Diners enjoy a meal at a restaurant that has reopened in Beijing. (WANG ZHUANGFEI / CHINA DAILY)

According to an old Chinese saying, "To the people, food is heaven". For Xu Ning, a homemaker in Beijing, restaurants will be her "heaven" after the outbreak, as the mother of two is desperate to have a good meal out.

She has explored every popular recipe on social media, including those for youtiao (fried dough sticks), cakes and fried chicken wings, as her domestic workload has increased sharply. Due to school being suspended for her children, and her husband also having to work from home, she has had to prepare meals for four since the Spring Festival holiday. Before the outbreak, she only prepared dinner for the family.

"Three meals a day is driving me crazy," Xu said, adding that she has been in the kitchen nearly all day. She dare not risk meals being delivered to the family home, due to health concerns.

Hot pot, Wuhan hot and dry noodles, spicy bullfrog, milk tea and barbecue are the top five choices for restaurant diners when the outbreak ends, according to data from Civiw.

When a restaurant selling chuan'er (lamb skewers) reopened on Feb 22 in Lanzhou, Gansu province, more than 6,000 were sold, according to a clip on Pear Video.

Long lines formed at Taotaoju, a traditional teahouse in Guangzhou, capital of Guangdong province, when it reopened on Feb 21. However, the local authorities later suspended business at the venue. The chain has since reopened gradually. 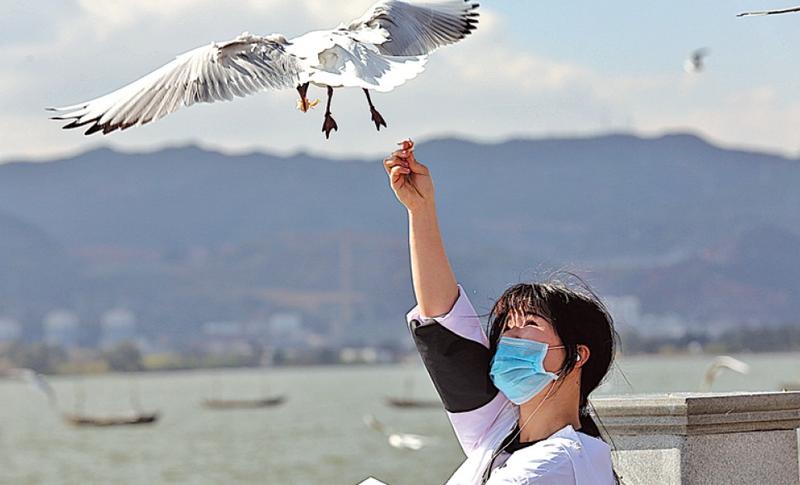 The food delivery platform Meituan Dianping has launched a program to provide catering services for restaurants resuming operations during the outbreak. More than 150 catering companies in Beijing, Shanghai and Shenzhen, Guangdong, have joined the program.

Alibaba's food market Fresh Hema, which offers a delivery service, had the idea of "sharing employees" with restaurant chains to solve both a shortage of delivery personnel and a surplus of restaurant staff members.

The Evergrande Research Institute, a think tank, said that over the Spring Festival holiday－traditionally a peak time for restaurants－the catering industry saw sales losses of about 500 billion yuan.

According to the National Bureau of Statistics, the country's catering industry saw revenue of 4.67 trillion yuan last year, of which 15.5 percent was earned during Spring Festival.

The Ministry of Commerce said a series of measures to minimize the impact of the virus on the hotel and catering industries have been rolled out and more steps are on the way to help the latter recover from the outbreak. 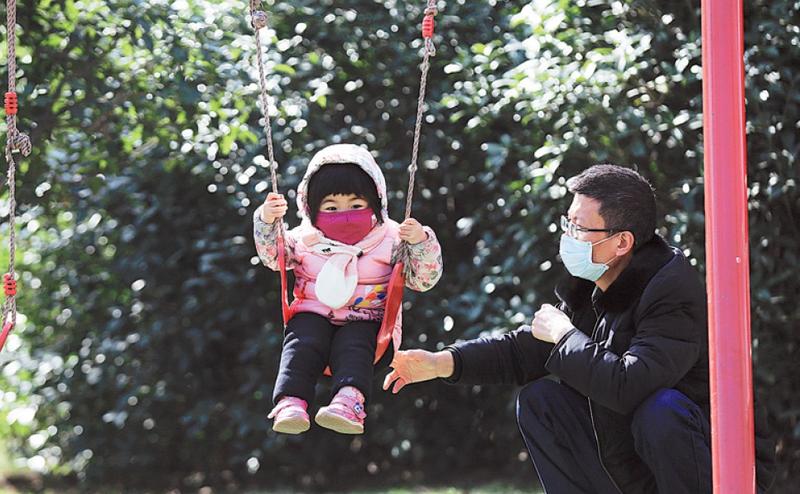 A father watches his daughter on a swing at a park in Huai'an, Jiangsu province. (ZHOU CHANGGUO / CHINA NEWS SERVICE)

In addition to dining at their favorite restaurants, many people have added travel to their post-outbreak wish list as tourist attractions gradually resume operations.

Lan Ping, a 60-year-old retired teacher in Shenyang, Liaoning province, who has made online inquiries about dozens of cities in the past month, has scheduled a trip to Chengdu, capital of Sichuan province, in June.

"Staying with the family 24 hours a day, seven days a week is not as good as it seems. I need time for myself. Travel is the best way. The disease has reminded me that you should not hesitate to realize your dream, because no one knows what will happen next," Lan said.

Tourism has been severely hit by the outbreak, with the number of domestic trips alone set to plunge by more than 930 million this year, a fall of more than 15 percent year-onyear, according to the China Tourism Academy.

A number of scenic areas, including the West Lake in Hangzhou, Zhejiang province, Zhangjiajie in Hunan province and the Giant Wild Goose Pagoda in Xi'an, Shaanxi province, have decided to partially reopen to tourists. All scenic spots have taken measures to ensure visitors' safety.

Some 71.5 percent of respondents said they would take a trip after the outbreak is under control, with nearly 21 percent wanting to travel as soon as possible, according to a survey by the tourism academy.

Alibaba's online travel service provider Fliggy said that from Feb 24 to 28, searches for rail services and flights for the Labor Day holiday from May 1 to 4 had risen by 40 percent from the previous week, while searches for hotels were up by 35 percent.

Some 55 percent of customers who canceled their travel plans due to the outbreak said that they would reconsider them later this year, according to a survey by Fliggy.

Marketing and digital strategist China Skinny has predicted an "explosive" recovery for travel in China, based on experiences following the outbreak of severe acute respiratory syndrome in 2003.

Sheryl Shen, China Skinny's associate marketing manager, said in a report that during Golden Week in October 2003, the first major national holiday after the SARS outbreak, the number of flights rose by more than 200 percent year-on-year. For Spring Festival the following year, the number of flights surged by 201 percent, compared with the month before the outbreak in early 2003.

Dragon Trail, a digital marketing agency, predicted that in addition to the school holiday months of May, July and August, the weeklong National Day holiday in October would witness a travel boom.