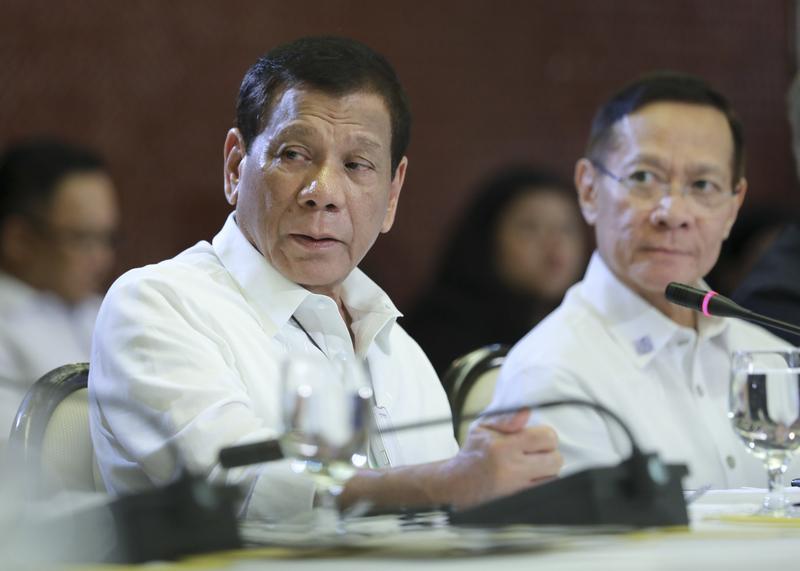 Duterte, 74, and his longtime aide, Go, were tested for COVID-19 on Thursday after they attended on March 5 an event where a coronavirus-positive person attended.

“We are fit and healthy to perform our duties,” Go said in a statement.

The Philippines has now a total of 64 confirmed COVID-19 cases, including five deaths.

Duterte placed Metro Manila, home to nearly 13 million people, on lockdown for a month, imposing travel restrictions and prohibiting large gatherings, in a bid to contain the spread of the deadly virus. 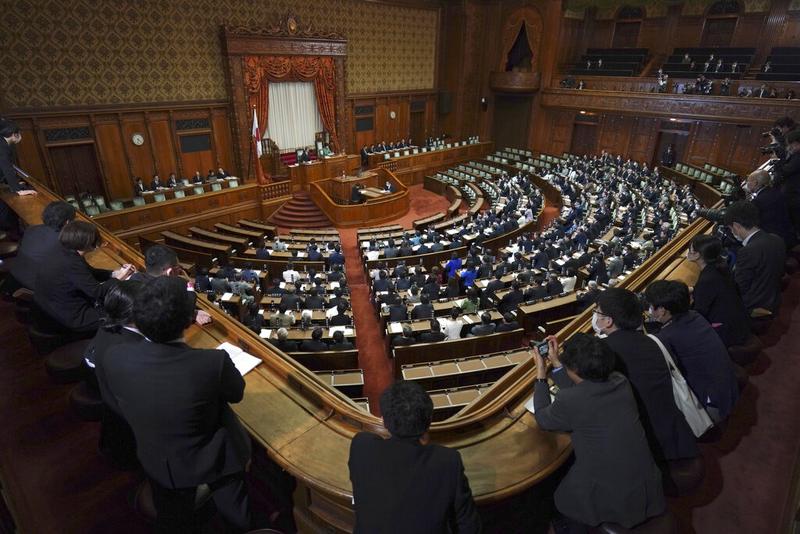 Lawmakers vote during a plenary session at upper house of parliament in Tokyo on March 13, 2020.  (EUGENE HOSHIKO / AP)

The bill, which amends a 2012 law drawn up after a flu epidemic in 2009, was approved by upper house lawmakers after the lower house passed the legislation on Thursday. Abe would have to declare a state of emergency in order to use the new powers.

Abe has requested schools to close and organizers of events to cancel large gatherings but so far has not had the power to make them comply.

Separately, Japan's economy minister said the country must take “bold and unprecedented” steps to beat the economic fallout from the coronavirus, suggesting large-scale fiscal stimulus is in the works as the government tries to fend off a recession.

Japan authorities reported on Friday that the number of COVID-19 infections stood at a total of 676 people as of 10:30 am local time. The death toll currently stands at 26 with the figures from the Diamond Princess.

Japan Airlines also said on Friday it would reduce 1,468 flights on 60 domestic routes across the group between March 20-28, citing a drop in demand due to cancellations and delays of sporting and cultural events amid the coronavirus outbreak.

Singapore will deny from Monday entry or transit to visitors who have been in Italy, France, Spain or Germany in the last 14 days, as part of measures to control the fast-spreading coronavirus, the health ministry said on Friday.

The southeast Asian travel hub, which also advised against non-essential travel to the four countries, will immediately halt docking by cruise ships, it added. 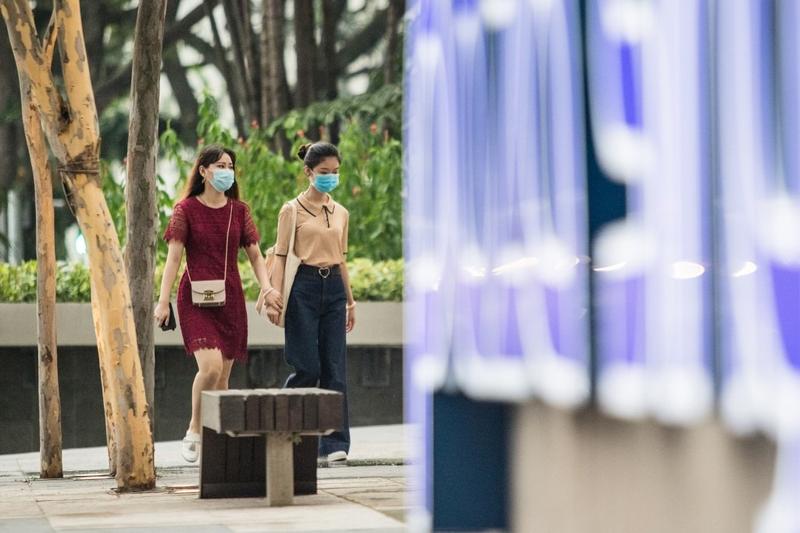 Women wear facemasks amid fears of the COVID-19 novel coronavirus in the Orchard Road shopping district in Singapore on March 10, 2020. (LOUIS KWOK / AFP)

Australian Home Affairs Minister Peter Dutton has tested positive for COVID-19, and the result was confirmed on Friday afternoon. Dutton has recently returned from the United States.

Australian Prime Minister Scott Morrison on Friday urged people not gather in groups of more than 500 but said he would still go to a weekend rugby game, as health officials warned millions of residents will contract coronavirus withinths.

The call does not include schools, airports or public transport.

Australia has recorded 156 infections and three deaths from the flu-like disease, figures that authorities expect to increase rapidly in the coming weeks.

Two Kazakh citizens who arrived from Germany on separate flights over the last week tested positive, Health Minister Yelzhan Birtanov said at a press conference. Kazakhstan has tested 3,389 people for the virus to date and has nearly 10,000 more kits available, he said.

Kazakhstan, a country of 18 million, is treating the sick people in an Almaty hospital and is working to identify and quarantine others that were on the flights, Birtanov said.

Kazakhstan is planning to shut down schools, colleges and universities starting next week and cancel all public events in an attempt to contain the pathogen’s spread.

Pacific islands are imposing strict lock-down measures to combat the coronavirus, denying access to supply vessels and prohibiting human-to-human contact during aircraft refueling, amid fears their small healthcare systems could be over-run.

The region recorded its first case of coronavirus this week, in French Polynesia, although most island nations cannot screen for COVID-19 cases onshore which is potentially masking its spread.

One of the wealthiest Pacific nations, Fiji, this week opened its first facility capable of testing for the coronavirus, one of only four such facilities in the region, Radio New Zealand reported. 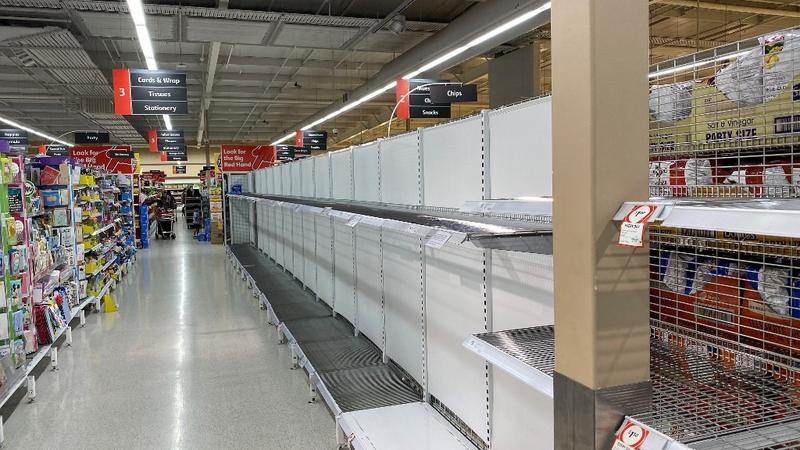 The United States-backed Marshall Islands this week suspended all incoming air travel, while those on aircraft landing to refuel are being restricted from human-to-human contact.

Cruise ships have been denied port calls in New Caledonia, Tonga, Cook Islands and Samoa, among others, over the past fortnight, as local authorities tighten controls.

The island of Pukapuka, a tiny coral atoll in the Cook Islands with a population of 500, has been left short of foods like sugar, flour and rice after turning away a supply vessel.

Cambodia on Friday decided to ban all cruise ships from entering the country through the Kaom Samnor international checkpoint on the Cambodia-Vietnam border with immediate effect, according to an official notice.

“Ali Akbar Velayati, who also is the head of Tehran’s Masih Daneshvari hospital, had contacts with many coronavirus patients in past few weeks. He has been infected and is under quarantine now,” Tasnim reported.

Iran on Thursday reported 75 new deaths and 1,075 confirmed cases of the coronavirus, the health ministry said, bringing the death toll to 429 in the worst-hit country in the Middle East.

Indonesia announced on Friday that it was allocating 120 trillion rupiah (US$8.1 billion) from the state budget to support the economy through tax incentives and subsidies for workers, businesses and families affected by the COVID-19 pandemic.

The government also unveiled a second fiscal stimulus, worth of 22.92 trillion rupiah (US$1.55 billion), after the first package of US$745 million was announced last month, despite only 34 confirmed cases of COVID-19 in the country so far.

Separtely, its trade authorities placed a temporarily ban Friday on the export of face masks to safeguard domestic supply.

Its health authorities announced on Friday that a 59-year-old man has died of novel coronavirus in Indonesia's Central Java province on Wednesday, bringing the death toll to two.

Authorities in northern Laos' Huaphan province called for the temporary closure of 10 traditional border crossings with Vietnam as part of efforts to prevent an outbreak of the COVID-19.

Employers in Laos should avoid hiring new foreign nationals from areas or cities where the coronavirus has been reported, authorities have advised. 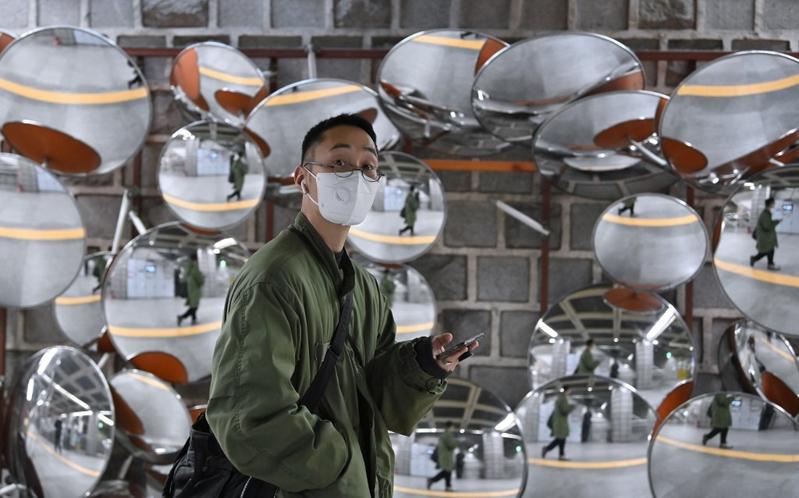 A man wearing a face mask walks past mirrors set up at a subway station in Seoul on March 12, 2020. (JUNG YEON-JE / AFP)

South Korea's financial regulator said Friday that it will ban stock short-selling for the next six months as the local stock market plunged sharply recently on worry about the COVID-19 outbreak.

A second patient has been diagnosed with coronavirus in Turkey, the country’s Health Minister Fahrettin Koca said on Friday after Ankara announced shutting all schools for two weeks from March 16 and banning spectators from sports arenas through next month.

The second patient was a close contact of the first one.

"On-arrival-visa for the nationals of all the countries has been suspended starting from Satursday until April end," Bikas Devkota, spokesperson at the country's Ministry of Health and Population said on Friday morning.

"All the permits that have been issued so far or were about to be issued for spring expeditions from the south sdie of the Qomolangma in 2020 have been called off for now, "Meera Acharya, Director at the Department of Tourism (DoT), the authorized government body that issues climbing permits, confirmed to Xinhua.

Health authorities in the southern Vietnamese city of Ho Chi Minh want to stop a Bahamas-flagged cruise ship with Italians on board from docking at the economic hub on Friday over coronavirus concerns, state media reported.

The Health Department on Thursday advised the People’s Committee of the city not to allow passengers on the cruise liner, Silver Spirit, to disembark, the Tuoi Tre newspaper said.

Myanmar government Friday announced the restriction of mass gatherings and public events including the traditional Thingyan water festival until the end of April, according to an announcement issued by the President's Office.

The ban was announced after Delhi Chief Minister Arvind Kejriwal's government declared COVID-19 an epidemic and ordered the closure of all schools, colleges and cinema theaters in the city until March 31.

Two Indian states also ordered the closure of public buildings, malls, cinemas and bars in several major cities on Friday, with Mumbai and Bengaluru subject to differing restrictions, after the country reported its first death from the coronavirus.

With just 74 confirmed cases of the virus and a single death, India, a country of 1.3 billion people, has so far fared better than elsewhere in Asia, Europe and North America.

But experts say India’s already overstretched medical system would struggle to deal with a major rise in serious cases.

Saudi Arabia detected 17 new cases of coronavirus, 11 of whom were Egyptians, state news agency (SPA) said on Friday, taking the tally in the kingdom to 62.

Saudi Arabia suspended on Thursday all social gatherings in wedding halls and hotels over coronavirus fears, the state news agency reported quoting a source in ministry of interior.

Australia’s and New Zealand’s top finance lawmakers will hold a Skype call to discuss economic threats from the coronavirus, after New Zealand Finance Minister Grant Robertson canceled his trip to Canberra at the last minute, media reported on Friday.

The Radio New Zealand report said Robertson decided to stay in New Zealand to focus on the country’s response to the outbreak.

New Zealand Prime Minister Jacinda Ardern said on Friday the COVID-19 Cabinet Committee agreed additional border measures were necessary and decisions would be made by the govt over the weekend. 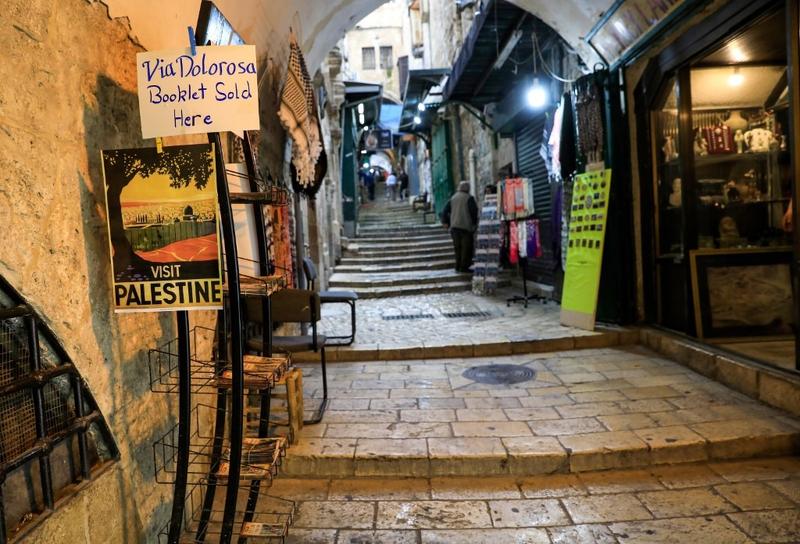 This picture taken on March 12, 2020 shows a view of a nearly-deserted alley in the Old City of Jerusalem after, Israel imposed a two-week quarantine on all travellers entering the country, almost stopping tourism as officials confirmed its100th case of the COVID-19. (PHOTO / AFP)

Separately, Thailand issued a new coronavirus warning to the party-going public on Friday after a cluster of 13 cases was traced to a group of friends who shared cigarettes and drinks.

Qatar announced on Thursday the closure until further notice of all cinemas, theaters, gyms, kids areas and museums over coronavirus fears, the state news agency and government communications office reported on Twitter.

Israeli Prime Minister Benjamin Netanyahu on Thursday ordered most schools in the country to close as a precaution against coronavirus, and called for the formation of an emergency national unity government.

Primary and secondary schools, with some exceptions such as special education programs, would be shut, he said.

Israeli Health Ministry said on Thursday that 109 people have been confirmed infected with COVID-19 in Israel, dozens of them were diagnosed over the past day.

Sri Lankan President Gotabaya Rajapaksa and Prime Minister Mahinda Rajapaksa on Friday urged the nation to remain calm saying all steps are being taken to prevent the COVID-19 spread, after the second case was reported in the country.