They are as Australian as you can get－the cuddly koala is a favorite with tourists and the country's locals alike. But thousands were killed during this summer's disastrous bushfire season in eastern and southern Australia, including entire colonies wiped out.

More than 210,000 hectares－about half the total area of the island－were scorched by the fires.

In Victoria and Queensland, numbers are still being tallied, while in New South Wales, or NSW, it has been estimated that 5,000 of the animals died.

Pictures of koalas burned and dying during the fires were seen around the world. But the fires are just one aspect of the koala's plight over the decades. 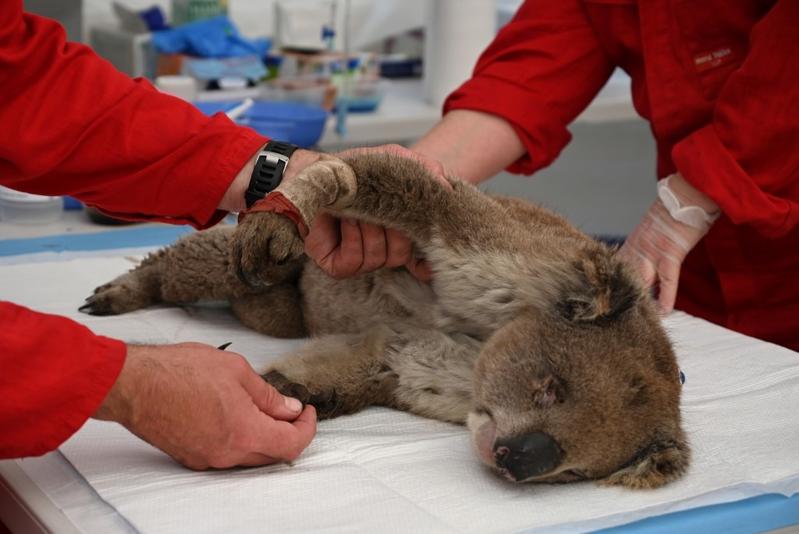 An injured Koala is being treated for burns by a vet at a makeshift field hospital at the Kangaroo Island Wildlife Park on Kangaroo Island on Jan 14, 2020. (PETER PARKS / AFP)

Disease, climate change, the encroachment of urbanization on their habitat, domestic dogs and cats－these have all had an impact on the koala.

A report released on March 3, commissioned by the International Fund for Animal Welfare, or IFAW, put the number of koalas that died during the bushfires in NSW at a minimum of 5,000, or 12 percent of the state's known koala population.

According to a report commissioned by the International Fund for Animal Welfare, the koala population has been cut by at least 66 percent due to drought, fires and man-made causes such as the urban encroachment on koalas' natural habitat

But the report adds that over the past 30 years in NSW alone, the koala population has been cut by at least 66 percent due to drought, fires and man-made causes such as the urban encroachment on koalas' natural habitat as the moneyed middle classes clear land for their weekend homes. With that come cats, dogs and cars－three things koalas cannot live with.

The report has called on the NSW government to add the koalas to the Endangered Species List under the NSW Biodiversity Conservation Act.

IFAW wildlife campaigner Josey Sharrad said there are no agreed estimates as to the number of koalas that were in the wild before the fires. "The best estimate is around 329,000," she said.

The numbers have been declining around the country over the past 30 years, she said. 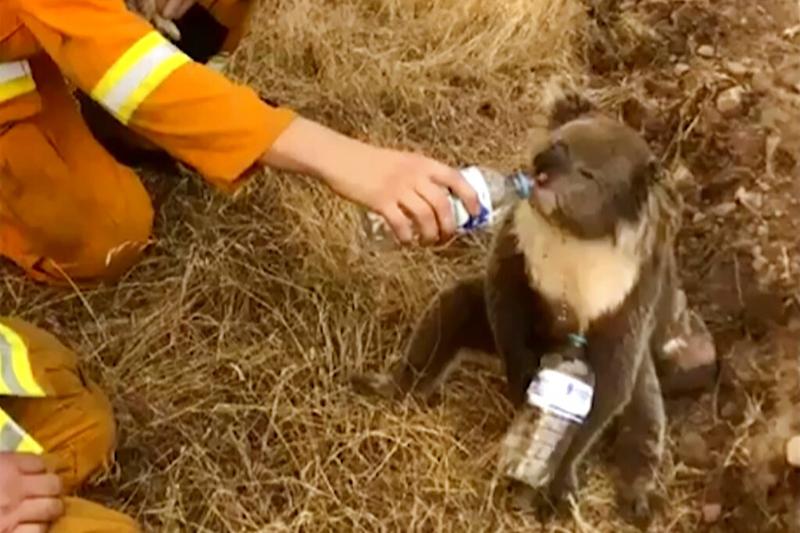 In this image made from video taken on Dec 22, 2019 and provided by Oakbank Balhannah CFS, a koala drinks water from a bottle given by a firefighter in Cudlee Creek, South Australia. (OAKBANK BALHANNAH CFS VIA AP, FILE)

To include koalas on NSW state's endangered list "on an emergency basis" for the next two years will give the animals "breathing space to recover", said Sharrad.

Sharrad said the situation for the koalas is complex and they face different problems state by state－their populations are plummeting in NSW and Queensland and "some individual populations have become functionally extinct".

Euan Ritchie, associate professor in Wildlife Ecology and Conservation at Deakin University in Victoria, said the No 1 thing we can do to protect koalas is to stop destroying their habitat via land clearing, for housing, mining or agriculture.

Sharrad said koalas "can recover if we give them a reprieve" through added protections."They are literally fighting for their survival. We need to lend them a helping hand; we owe them that."